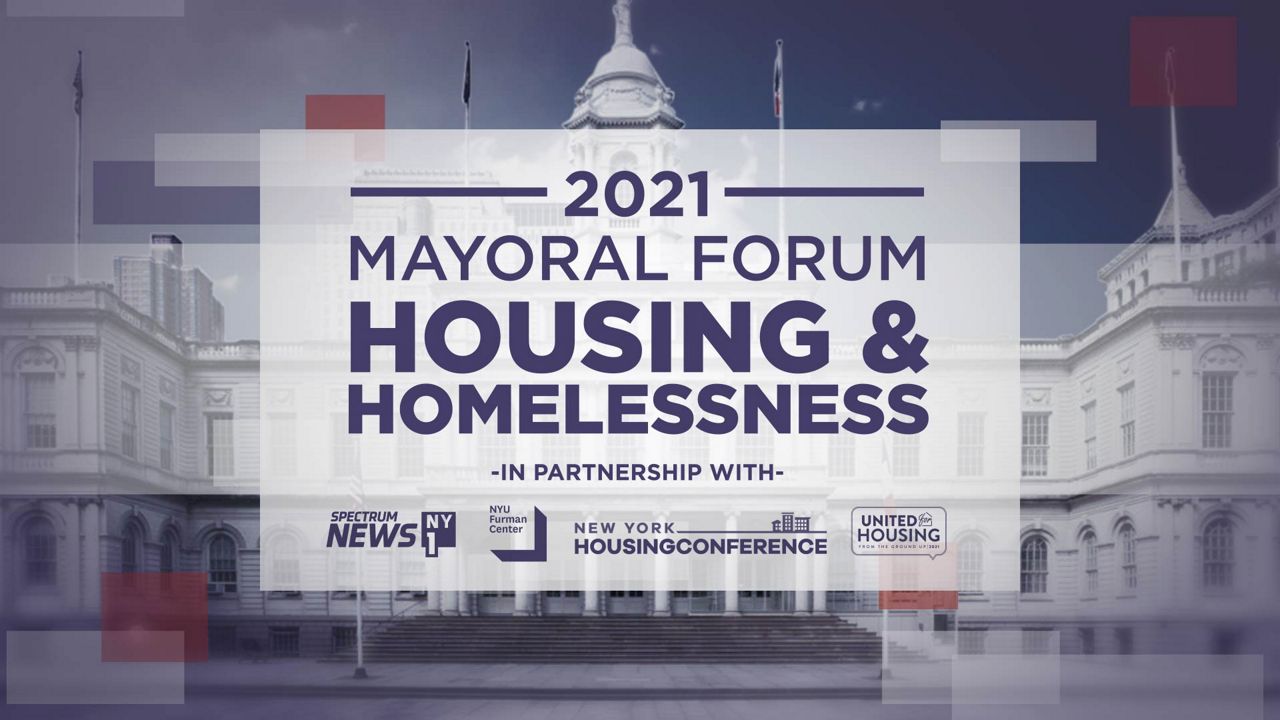 NEW YORK — In their first televised forum in the race for mayor, eight Democratic candidates appeared together on NY1 where they disagreed on the best path forward for NYCHA — the city’s sprawling public-housing authority that is home for more than 400,000 New Yorkers.

The event, moderated by NY1 Political Anchor Errol Louis, was co-sponsored by the NYU Furman Center and the New York Housing Conference with the United for Housing Coalition. The candidates invited to the event included:

While the Democrats did not substantially differ on many issues, NYCHA was a source of division.

The housing authority needs about $40 billion for repairs and major overhauls of buildings as tenants contend with mold, lead paint, and overall dilapidated housing. But some residents have raised red flags about involving the private sector to get those funds, out of fear NYCHA would shift away from its status as public housing and lead to evictions.

At issue is NYCHA Chair Greg Russ’ proposal to completely restructure the authority by converting 110,000 units into Federal Section 8 housing and transferring them to a new public entity, the "public housing preservation trust." That trust would oversee and finance the rehabilitation of those units. NYCHA would still manage developments on a daily basis. This plan needs state and federal approval.

In the forum, Garcia and Donovan backed the plan, dubbed the “NYCHA Blueprint,” as the only viable way to raise the massive amounts of money needed to repair public housing units. To them, the blueprint is especially important to get to a long-term funding stream since the housing authority estimates the bill goes up by about $1 billion every year mass repairs are not done.

“This allows us to leverage federal money. We don’t have to use more city money,” said Garcia, the former city sanitation commissioner who at one point was temporarily put in charge of the housing authority.

Not having large-scale repairs, she said, would only hurt tenants: “Otherwise, the choice is we are condemning them to live in buildings with no heat, no hot water, no elevators, mold, vermin, and lead.”

But most of Garcia’s opponents, while not explicitly rejecting the “NYCHA Blueprint,” focused on skepticism from public housing residents who are wary the blueprint will result in them losing their rights. Some tenants fear the plan is an attempt to privatize public housing units and offer them up to developers, ultimately leading to high rents that would force them out of their apartments.

“I fundamentally reject the blueprint for change, the RAD agreement, the RAD deal,” said Morales, who proposed addressing the trust issue by giving tenants a majority on the NYCHA Board as well as a tenant chair.

“While I agree that there is a lot to commend in the blueprint, sadly there has not been sufficient trust. We have to create trust with our residents,” said Wiley, who called for the city to solidify a governance structure to ensure tenants have a stronger say on the NYCHA board.

Garcia rejected fears that tenants will lose their rights, touting the “NYCHA Blueprint” as a private-public partnership. She stressed that NYCHA residents will keep all their protections and pay an affordable rent, and characterized the blueprint as “just financing mechanisms” to fund repairs.

While Democratic mayoral candidates in the #NY1MayoralForum agreed on a wide range of issues, they differed on how to save #NYCHA.

Several candidates — such as Stringer and Morales — promised to address funding for repairs by dedicating $1.5 billion in city money every year for NYCHA while pushing the state government to match the figure. Others, like Adams, touted investment opportunities in selling NYCHA air rights to local community developers and allowing existing public housing parcels to be sold or leased to private developers. Meanwhile, Wiley and Yang expressed confidence that the housing authority would get federal funding for repairs despite decades of disinvestment on the federal level.

Despite the NYCHA divide, all the mayoral candidates in the forum stressed what advocates have warned for months: whenever the eviction moratorium ends, large numbers of New Yorkers will be forced out of their homes because of back rent debt after the coronavirus pandemic led to job losses — unless the city government steps in to assist tenants.

As a result, the candidates supported extending the eviction moratorium, and backed several different proposals to keep New Yorkers in their homes and address the housing crisis in the five boroughs, including:

While there are some housing proposals candidates don’t back — such as canceling rent, which Garcia had previously said she doesn’t endorse — the eight Democrats did focus in on a parameter they argued would reduce evictions: making sure New Yorkers do not pay more than 30% of their income on rent.

“Ideally, I would like us to move to a place where we are not charging anyone, with low to moderate income, more than 30% of their income for the rent. That is an established metric,” Morales said.

“Everyone’s looking for this magic dollar amount, but in actuality if you are a teacher or an accountant and you have four, five children and you’re paying above 30% of your income on rent, that is unfair,” Adams said. “The real number is: we shouldn’t have New Yorkers who are moderate income or low income paying more than 30% of their income on their rent.”

For his part, when pressed, Stringer said the next mayor’s priority should be affordable housing for low-income New Yorkers to prevent more people from becoming homeless, but he also did not provide a specific income range.

On stemming the tide of homelessness in the city, which has consistently risen over several mayoral administrations in a row, the candidates in the forum often circled back to their housing plans. They maintained that a vast increase in units — such as by giving more housing vouchers and increasing their value — would prevent people from becoming homeless, and they called for the city to increase supportive services.

“We need to prevent the homelessness dynamic from occurring in the first place,” McGuire said. “Once we prevent it, we need to make sure we have the services that are necessary, and that services go to mental health care services. We need services for those who are formerly incarcerated, we need services for drug abusers.”

Morales and other candidates also vowed to halt the city’s trend of increasing investments in shelters. While they argued shelters are necessary, the Democrats said the next mayoral administration needs to invest in preventing homelessness and making sure more New Yorkers get permanent affordable housing.

Watch the full forum above.