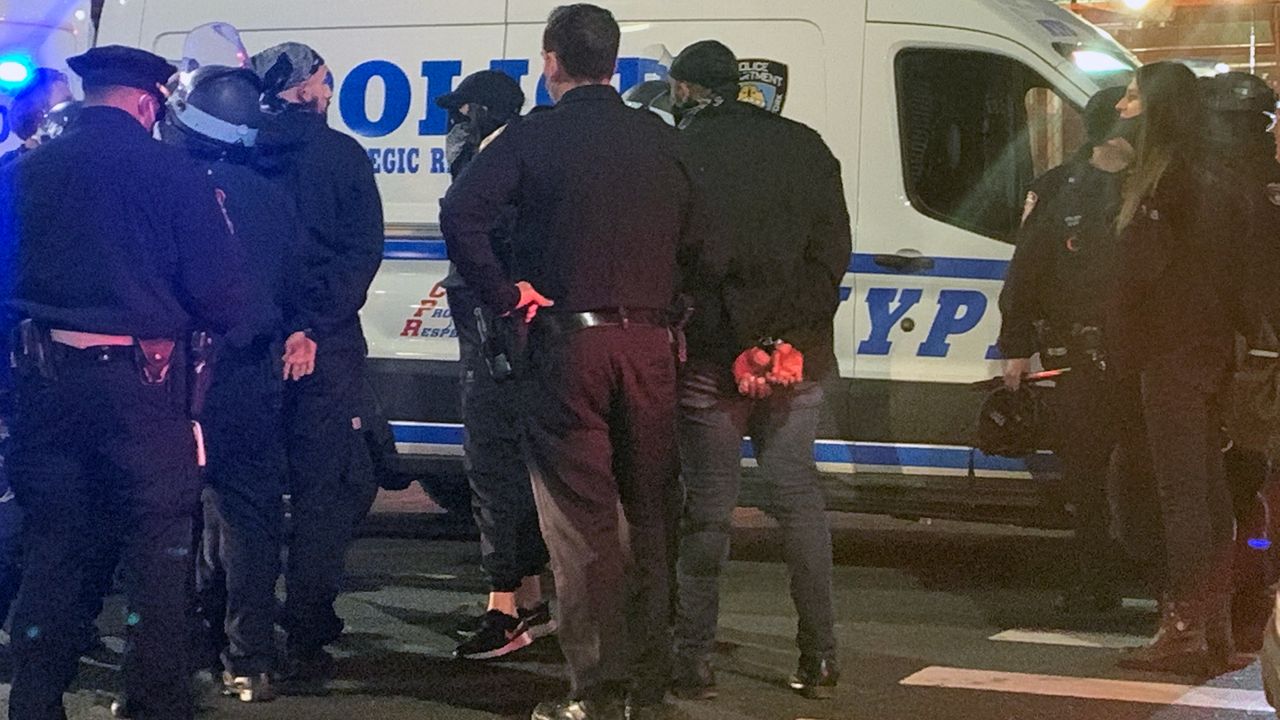 Police, Protesters Clash During NYC Protests Calling for Every Vote to Be Counted

NEW YORK - Multiple arrests were made after skirmishes between police and protesters in Manhattan Wednesday amid protests calling for every vote to be counted before a winner is declared in the presidential election.

The NYPD says a total of 56 people were arrested. Of those, 52 were issued desk appearance tickets and four were charged with more serious offenses.

Police say the most serious charge, assault in the second degree, was filed against a 23-year-old woman who is accused of punching a police chief in the face.

NY1 crews spotted clashes between protesters and police in the streets near Washington Square Park around 8 p.m.

Police tweeted photos of fires they say were started by people in the area.

We support everyone's right to self-expression, but setting fires puts others at risk and will not be tolerated. We are working to de-escalate the situation near Morton Street in the West Village to prevent further damage from occurring. pic.twitter.com/4nTK6UUBzC

The department later tweeted that more than 20 people who they say "attempted to hijack a peaceful protest by lighting fires, throwing garbage and eggs in Manhattan" were arrested.

We appreciate and value the importance of freedom of speech. Our top priority is and always will be safety. We have arrested more than 20 individuals who attempted to hijack a peaceful protest by lighting fires, throwing garbage and eggs in Manhattan. pic.twitter.com/5SzZ6lDWEz

Chief of Department Terence Monahan had told NY1 earlier that police were looking out for people coming into the peaceful group trying to start trouble. He said those "troublemakers" would be arrested.

Protesters who spoke to NY1, however, accused police of being the aggressors, saying they were protesting peacefully and that officers boxed them in.

"It was peaceful. They started attacking and tackling, people on bicycles," said one protester. "The NYPD was tackling peaceful protesters. We were trapped. They tried just arresting everyone in front of them."

"One block over, they cornered all of us. They had police on one side, police on the other, and they pushed in with their bikes, causing us to fall on each other," said another. "The girl linked next to me was arrested. There was probably seven or eight on the ground. Then, they forced us out of the square."

A larger group of protesters had made their way to the park from the New York Public Library on Fifth Avenue, chanting “every vote counts” and “count every vote” along the way.

NY1 crews also saw some protesters being arrested by police officers at 14th Street and Union Square, though police had not officially commented on those arrests as of 11 p.m. Wednesday.

Many people that witnessed the scene told us that they aren't sure what caused the altercations.

"We were very afraid. We were very confused. We have a permit to be here. There had been absolutely no violence earlier in the night, and they pushed us onto the sidewalk, more confusion, and then that is the last that I saw," said a protester.

As of 10:20 p.m., there were no reports of damage to commercial properties.

The NYPD also tweeted out photos of weapons they said were confiscated at a protest Wednesday, though they did not specify which protest they were found at.

These weapons, confiscated at protests tonight, put others at risk. Bringing weapons to peaceful protests cannot and will not be tolerated. We are currently working to de-escalate the situation. Anyone caught with a weapon will be arrested. pic.twitter.com/GiCDv74ncT

Officers recovered these items tonight in connection with a protest.
In addition to knives, a taser, spray paint and m-80’s, they also put out fires and arrested someone breaking a store window. @NYCSpeakerCoJo https://t.co/XFMYJrpJXZ

The protests are a response to President Trump saying he wants the Supreme Court to stop the counting of ballots in some states.

As of Wednesday night, absentee ballots were still being counted in several battleground states, and the AP had yet to project a winner in Pennsylvania, Nevada, Georgia and North Carolina.

Trump’s early leads in Wisconsin and Michigan evaporated Wednesday afternoon, leading to the AP projecting that Biden had won both states. Ballots counted in those two states were all received on or before Election Day, but took more time than usual to count because of an increase in mail-in voting due to the coronavirus pandemic.

Protesters said they were out to make it clear that all ballots received by state-imposed deadlines must be counted.

“They’re not counting the votes as they’re being mailed in. How can they predict something if and they haven't even got all the votes in?” said a woman from Portland while marching alongside New Yorkers. “We know how this works. We’ve predicted, they do this every single time. We’re not having it this time. They can’t call votes which they haven't even counted it. We know this. This is what they're famous for. That’s why we're out here tonight, to let them know they have to count every vote before they can predict who’s won.”

Many of those participating showed their support for Biden and his running mate, Kamala Harris, but said they also came out to make sure that every vote is counted, regardless of who ultimately wins the race.

Other protesters who made their way through Kips Bay almost 24 hours after the polls closed said that they're more focused on changing the entire system, than who gets elected as the next president.

"We don't want to get caught up in the hype of that one person that's going to be in the Oval Office. We know it's the entire system," said one protester. "This is bigger than one person, or one organization. This is a movement for the people by the people, and we need to stay firm in our beliefs."

Happening now: #BlackLivesMatter demonstration at 59th & 5th. They say they need to be here voicing concerns regardless of who wins #Elections2020 @NY1 pic.twitter.com/xDot5X36OG

Demonstrators block traffic & stage a sit in at 14th street and 2 Av. They’re talking about the presidential candidates @NY1 pic.twitter.com/uwotYKKxgH

Protests are expected to take place across the city until all absentee ballots are counted.

For the last few weeks, the NYPD has been preparing for social unrest around the presidential election. Officers are keeping an eye on the demonstrations and are posted outside of Trump Tower. Many officers were wearing riot gear in case violence occurs, as it did during some of the protests this summer sparked by the death of George Floyd.

Some demonstrators called the police presence at peaceful protests a violation of their rights.

“Why are they here in riot gear when people are peacefully assembling?" one protester said.