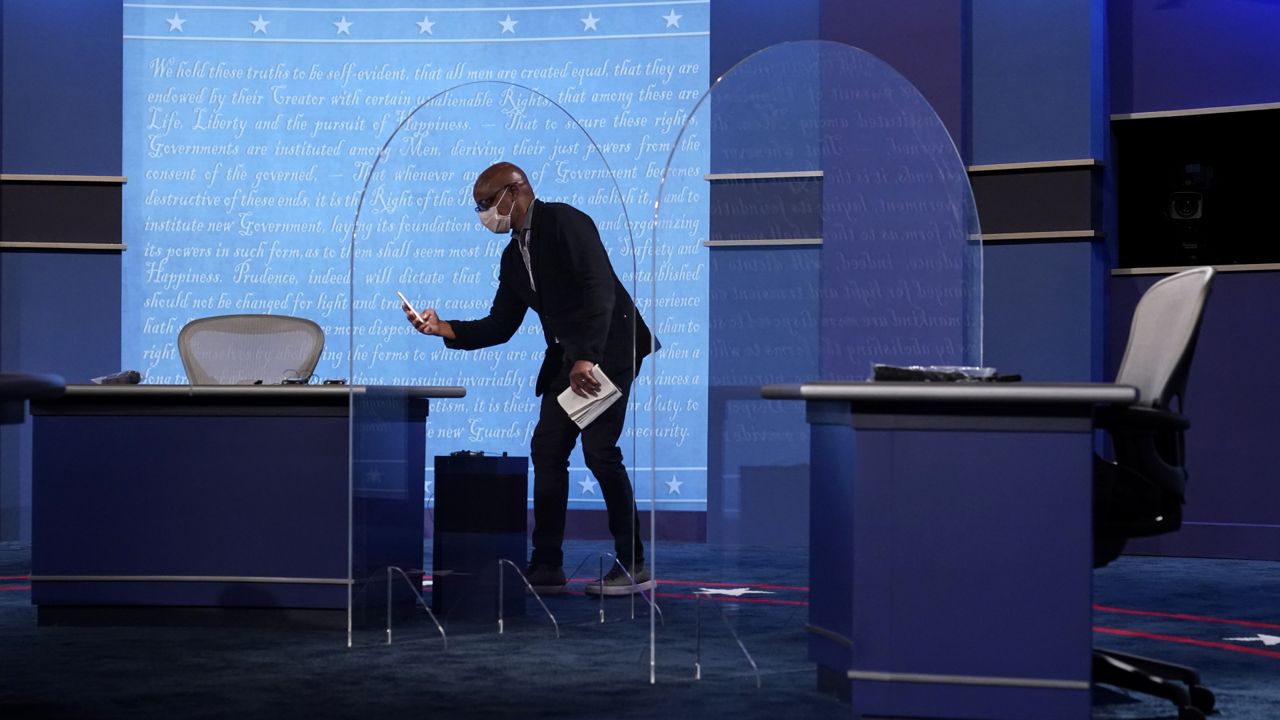 While Kamala Harris and Mike Pence will be sharing a stage at Wednesday night’s debate – the plastic dividers between them are almost getting as much hype in the wake of President Trump testing positive for coronavirus last week.

After resisting Harris’ call for additional health protocols at the debate in Salt Lake City, the Trump-Pence team has relented.

“If Senator Harris wants to use a fortress around herself, have at it,” said Katie Miller, a Pence spokeswoman who may be showing a lack of understanding of how to build an actual fortress.

It’s the first time in four years that the Democrats’ rallying cry is “Build That Wall” while Republicans want to tear one down. But the plexiglass will serve as a constant reminder that the leader of the free world had to be hospitalized for three days — with questions then swirling around Pence about who he almost touched and when did he almost touch them.

The coronavirus crisis at the White House has certainly taken attention away from Harris and her debut on the national debate stage. While she’s been quite adept at asking pointed questions at Senate hearings, she will have to adopt a more decaffeinated approach while taking on Pence.

Four years ago, Pence channeled his roots as a former radio talk show host and delivered a stronger performance than his Democratic rival, Tim Kaine, who seemed more frantic than thoughtful. Pence is hoping for a similar dynamic and that a possible viral moment at the debate has nothing to do with COVID-19 and everything to do with Harris trying too hard.

But the wind may be at Harris’ back. A new CNN poll released Tuesday shows that there is a Grand Canyon-sized gender gap in the presidential race with Joe Biden leading Donald Trump among women by 66 to 32 percentage points. Pence has the unenviable debate task of trying to help his boss make up ground in the final weeks of the race while not looking like a bully. So after last week’s shout-fest between Trump and Biden, there’s a real possibility that both candidates will play it subdued for different reasons while the president’s infection looms over the 90-minute affair.

The debate also takes on extra significance because it’s uncertain if the president’s health will allow him to debate Biden next week in Miami. Insistences on Twitter aside, Trump’s health could easily take a turn for the worse and it’s anyone’s guess if Biden really wants to take on an unhealthy rival while holding a healthy lead in the polls.

Vice presidential debates have had plenty of weird and memorable moments from Bob Dole looking like he was going to bite off Walter Mondale’s head in 1976 to Ross Perot’s running mate, Admiral James Stockdale, acting as if he had just happened to wander onto a stage with Al Gore and Dan Quayle in 1992. And then, of course, there’s Lloyd Bentsen’s famous takedown of Quayle in 1988 over whether Quayle was like John F. Kennedy. (“You’re no Jack Kennedy,’’ said Bentsen, in a slam-dunk.)

But on a stage in Utah, we could be in for the ultimate debate image when two candidates are literally separated by a divider as a nation desperately struggles to stay together.