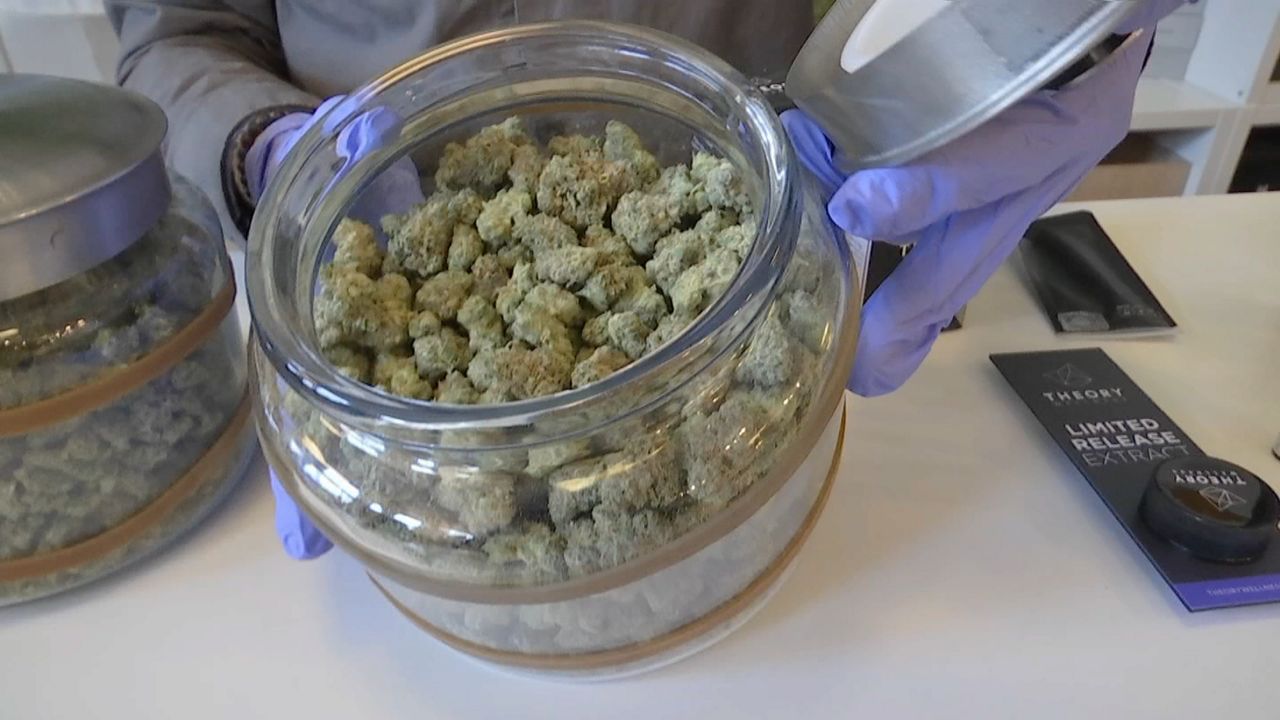 It's early afternoon on a weekday in Great Barrington, Massachusetts, and already there is a line out the door for Theory Wellness, a marijuana dispensary located in The Berkshires.

The legal dispensary is about a 45 minute drive from Albany. A quick glance at the license plates in the parking lot on this particular day showed that just about every customer had come from New York, where the drug is not legal.

Michael Lawton makes the drive here about once a month from Schenectady. He says marijuana helps ease his pain.

"I got in a car accident about four years ago. All the doctors wanted to do was put me on opiates," Lawton said. "I'm against that. I don't believe anyone should be tied to a pill."

"I would say a good amount — a fair amount of our people — is coming from New York or Connecticut," said Nicole Pantelides of Theory Wellness. "But we have been getting more people on our pre-order. More locals."

And business here is booming. This dispensary opened a year ago, and even with a 20 percent tax on the drug, people are shelling out big money to buy edible products and bud or flower from the marijuana plant which can be smoked. "In the last year, we've done roughly $40 million in sales out of this store just on the recreational side," said Thomas Winstanley of Theory Wellness. "That includes about 200,000 unique customers from all over the globe, as well as every state has come through here."

According to the Massachusetts Cannabis Control Commission, last year, the first full year of legal marijuana sales for which data was available, dispensaries did $420 million in business resulting in $71 million in tax revenue for the Commonwealth.

That number is expected to go higher in the coming years, and New York estimates about $300 million per year if it was legalized in the Empire State.

In 2015, New York state approved a medical marijuana program, but it was very controlled. The program does not allow the drug to be smoked, which is the most common form of ingesting it. That is why Lawton said won't enroll in New York's program and instead comes to Massachusetts.

"Yeah, it's very restricted. Most of everything you get has to be man touched. There is no flower program," Lawton said. "With all the problems with vape pens and everything in the past few months, I'm really reluctant to try anything that is manufactured like that because you really don't know what is in it."

Gov. Andrew Cuomo said this week if marijuana doesn't get legalized in the budget due April 1, he doesn't think it will get done at all.

Senate Majority Leader Andrea Stewart-Cousins says she believes its prospects of getting done this year are about as good as last year's, when lawmakers couldn't come to terms and the issue fell off the table.