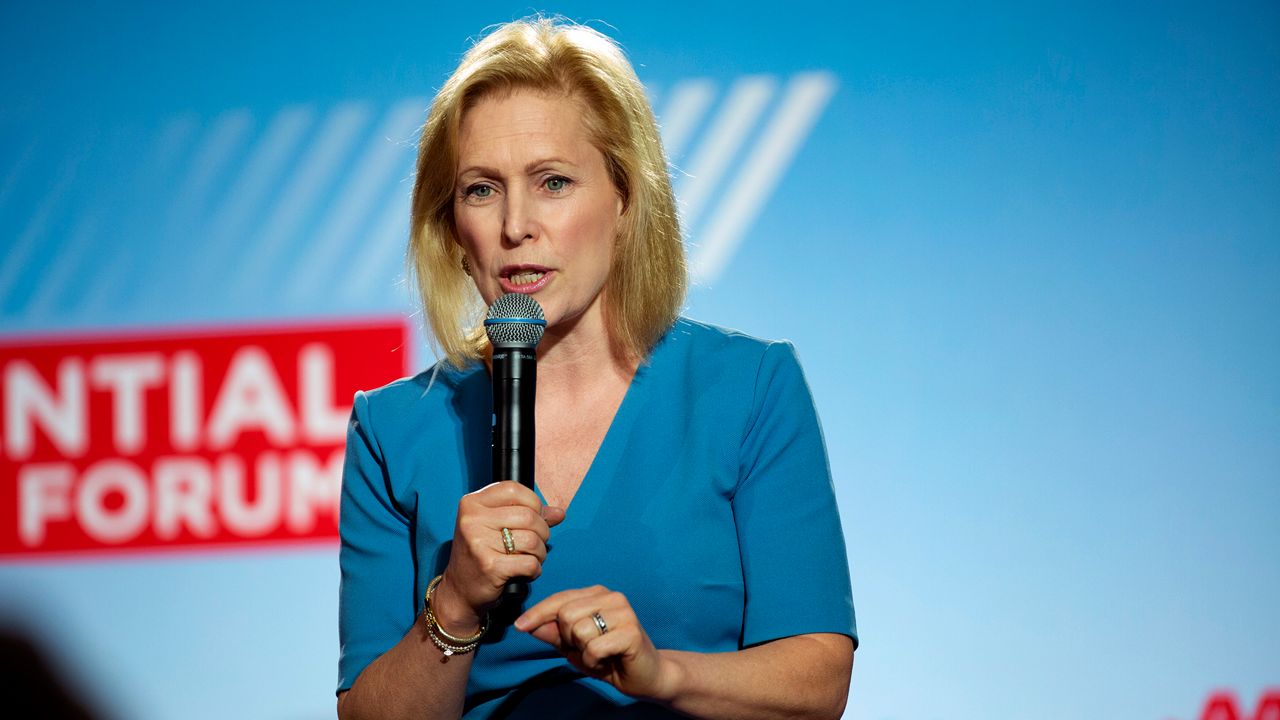 A file image of Sen. Kirsten Gillibrand speaking at the AARP Presidential Forum at the Waterfront Convention Center in Bettendorf, Iowa on July 16, 2019. Olivia Sun/The Des Moines Register via AP.

Gillibrand Continues to Fight the Shadow of Al Franken's Resignation

Kirsten Gillibrand has no regrets.

"The decision I made was to whether or not to carry his water and stay silent, and given eight allegations — two since he was senator and the eighth one being a congressional staffer — I couldn't stay silent," Gillibrand said at an event Monday in Manhattan.

This week, the Democratic senator from New York found herself defending her decision to call for former Minnesota Sen. Al Franken's resignation, more than a year after he stepped down after a talk radio host accused him of forcibly kissing her during a 2006 USO tour. Seven other women followed, saying Franken had forcibly groped or kissed them.

It was a spectacular downfall for one of the most prominent members of Congress, a prolific fundraiser once seen as a possible challenger to President Donald Trump, and a close personal friend of Gillibrand.

Now, he's speaking out. In a wide-ranging interview with The New Yorker, Franken says he regrets his decision to step down. He said he should have waited to appear before a Senate Ethics Committee for an opportunity to defend himself.

He's not the only one with regrets. Seven current and former U.S. senators told The New Yorker that they regretted how they handled the scandal.

But since the story published, the attention has been focused on Gillibrand, who has modeled herself as a champion of women and staked her much of her time in the Senate and her presidential bid speaking out against sexual harassment.

"There were 34 other senators that called on him to resign. You wouldn't know that today given that I seem to stand alone," Gillibrand said. "I could not defend his actions, and to somehow blame me for a man's actions and a man's decisions? It's pretty absurd."

On the presidential trail, some major donors have iced her out. She has also failed to register with voters in the early caucus states, her reputation for sharp elbows reinforced.

Back in January, she was grilled by hosts on The View who felt Franken had been unfairly made into an example.

Democratic strategist Rebecca Katz said as the Gillibrand campaign continues to struggle to break through, the Franken episode is unlikely to help.

"The way that the Franken dynamic played out is that many of those fundraisers don't want to be near her anymore because of this position," Katz said.

"She is still not breaking through, and this issue isn't going to help her, because the people who don't like Gillibrand will only like her less through this Franken controversy," Katz added.

Gillibrand would not answer questions Tuesday, the same day her bill to permanently fund the September 11th Victim Compensation Fund cleared the Senate.