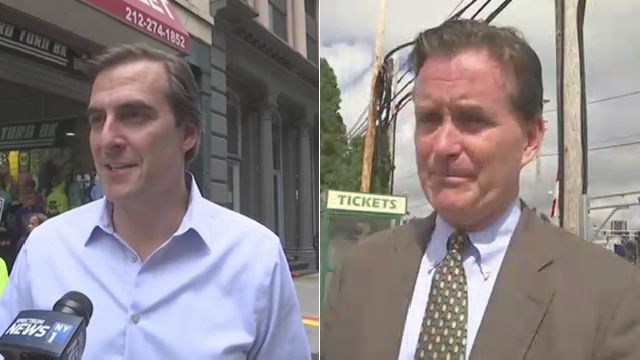 Even though Gov. Andrew Cuomo and his ticket were three for three in last week's primaries, the winds of change may be sweeping through the New York state Senate, where a slate of challengers with progressive credentials defeated seven incumbents Thursday.

Senate Republicans, who've been in control of the upper house for the better part of the last 50 years, held a press conference on Long Island on Monday. They believe the new Democrats' more liberal ideology will help them hold their seats and maintain power.

"I actually think it's going to bode well for our members, and our challengers, and our incumbents because the program and the platform of those who beat the IDC [Independent Democratic Conference] members and the woman who beat Marty Dilan, it's so radical it's almost incomprehensible," State Senate Majority Leader John Flanagan said.

But Democrats say the new progressive wave will work in their favor.

"Not surprisingly, that's nonsense," said State Sen. Michael Gianaris of Queens. "The candidates who won these primaries, many of them have a track record in public service, like John Liu and Robert Jackson. They are far from radical, they are good, solid public servants."

Democratic challengers beat six members of the former IDC, the independent conference that has held a coalition with Republicans for control of the state Senate the last six years.

Flanagan said he was surprised so many were defeated: "Does it hurt? Yeah, we worked with them. We worked well with them and we proved as Republicans that we know how to govern."

While the IDC challengers are predicted to win their districts in November, Democrats need to pick up at least one seat to win control.

"First of all, there are five Republicans who are not running for reelection because they see the writing on the wall. I think those districts are more competitive than they've ever been — some in Hudson Valley, some upstate, and some on Long Island," Gianaris said. "Right here in New York City, Marty Golden is in trouble like he's never been before because that's a very Democratic district."

If Democrats recapture the Senate, some believe that could pose a whole new set of problems for Cuomo, who managed to pass legislation with the help of the IDC. If Democrats take control, they may have an agenda that is much further to the left than Cuomo.