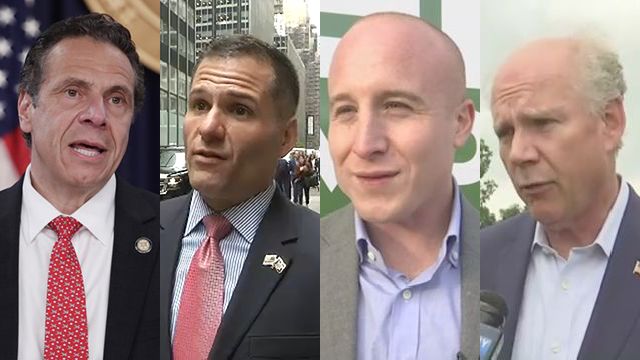 What's next? After the NY primaries, Republicans and Democrats are getting ready to clash

Thursday's primaries are in the books, so the general election campaign season is now upon us — with Election Day on Nov. 6, less than eight weeks away. What's to be decided next? In New York, we have races for governor, the U.S. Senate, state attorney general, and state comptroller. In addition, every member of Congress and all 213 seats in the state legislature are up for grabs. Here's a rundown of November's menu.

Andrew Cuomo's bid for a third term as governor now heads to a showdown with Republican Marc Molinaro, the Dutchess County executive. While the governor is trying to convince voters that he will protect New Yorkers from President Trump, including by attempting to circumvent the Republican tax bill, Molinaro is running a platform of trying to protect New Yorkers from Cuomo and the political culture of Albany. The Republican has made rooting out state corruption his top peg.

Previous Quinnipiac University polling showed Cuomo with a 57 percent to 31 percent lead over Molinaro among registered voters, but that lead is shaved down in a theoretical general election ballot that includes Cynthia Nixon. That's because although Nixon lost Thursday night, she has already secured a spot on the November ballot with the Working Families Party. She must now decide if she will continue her bid for the governorship. In that potential matchup with Molinaro, Nixon, and a few other third-party candidates, Cuomo's lead over Molinaro falls to 43 to 23; Nixon was tabbed at 13 percent in that poll.

A CLASH OVER THE SCOPE OF THE ATTORNEY GENERAL'S OFFICE

Their views on the purview of the AG's office will likely lead to clashes between now and then. Wofford has suggested he would seek to combat "sanctuary cities," while James has positioned herself has a protector of immigrants. The Democrat and Republican also do not see eye to eye when it comes to financial regulation. Wofford says the AG's office has "strong-armed" companies and stifled the state's business environment. James, meanwhile, said in a Spectrum News debate last month that she doesn't wish to be known as the "Sheriff of Wall Street" like former Attorney General Eliot Spitzer but also boasted about regulating businesses in the past. Wofford is facing long odds, however; he has little name recognition and a Republican hasn't won a statewide race in New York since 2002.

A SHIFT IN POLITICAL POWER IN THE STATE LEGISLATURE

Alessandra Biaggi's upset of State Sen. Jeff Klein — as well as the defeat of four other Democratic incumbents in New York — will have a major impact on Albany politics. Klein, the head of a now-disbanded group of Democrats that had a power-sharing agreement with Republicans in the state Senate, was one of the most powerful senators and was the deputy leader of the Democrats in the upper chamber. If Democrats win back control of the state Senate in November, Klein would have been one of the top leaders in a potential Democratic-controlled state government. Instead, Klein's defeat will leave that potential majority without the main leader for the old breakaway group, and a potential power grab for the deputy leadership role may ensue. Klein's old seat, meanwhile, is very unlikely to tip to Republicans given the large enrollment advantage Democrats have in the district. That almost ensures that Biaggi, the political newcomer, will become the district's next state senator. Questions linger over how she and the other insurgent New York City state Senate candidates who won Thursday night may try to advance their progressive agendas, how the state legislature would respond, and how the governor in 2019 would handle the desire from the left to change Albany's culture.

Easily, the most-contested congressional race in New York City is in the 11th district, which comprises all of Staten Island and a portion of Brooklyn. The incumbent Republican congressman, Dan Donovan, is facing a challenge from political newcomer Max Rose, the Democratic nominee and an Army veteran. Democrats, in their bid to take back a house of Congress, have targeted this seat, which hasn't been in Democratic hands since 2010. But Democrats do have an enrollment advantage. There are more than 183,000 active Democrats versus about 110,000 active Republicans. But what often swings elections in the district are voters unaffiliated with any party. There are more than 88,000 of them. In addition, the district heavily voted for Donald Trump in the 2016 presidential race.

Rose is hoping to prove to those voters that he has their best interests in mind, slamming Donovan's shift to the right during his heated primary against Michael Grimm. Rose and Donovan are advocating for most of their respective party's campaign platforms. Rose supports Planned Parenthood, stricter background checks on gun purchases, and expanding health care options. Donovan, meanwhile, argued during his primary campaign that most of the Affordable Care Act should be replaced, "sanctuary cities" shouldn't be protected, and he has supported President Donald Trump's "America First" foreign policy goals — all positions most Democrats oppose.

GILLIBRAND FACES REELECTION — WITH A POSSIBLE EYE ON 2020

New York Sen. Kirsten Gillibrand, who ran unopposed in the Democratic Senate primary in June, is facing Republican Chele Farley, an investment banker and a former fundraising chair for the state Republican Party. The race hasn't been getting much attention because Gillibrand, who has been in the U.S. Senate since 2009, is heavily favored to win reelection and is considered a possible presidential or vice presidential candidate in 2020. Earlier Quinnipiac University polling pegged her lead against Farley at 57 percent to 30 percent among New York voters. Her seat is considered one of the safest in the Senate.

Farley has focused much of her campaign on economic issues, saying she wants to lower taxes in the state and get more infrastructure funding. She also embraces the President's Trump line of "America First" when it comes to trade deals and foreign policy, saying the country needs to focuses on its own interests. Gillibrand, meanwhile, regularly slams Trump and his agenda. The two Senate foes also disagree on the U.S. Immigration and Customs Enforcement; Farley defends the agency, while the incumbent has called for it be abolished.​

Longtime State Comptroller Thomas DiNapoli heads to the general election against first-time candidate Jonathan Trichter, a financial adviser. In a position that most New Yorkers don't know much about, DiNapoli has largely gone unnoticed to the public and hasn't frequently clashed with Gov. Andrew Cuomo. That's something Trichter criticizes him for, saying DiNapoli hasn't been an aggressive auditor. Trichter, a Democrat who is running as a Republican against DiNapoli, has argued the comptroller's office should scrutinize each state budget and audit more agencies, such as the MTA.