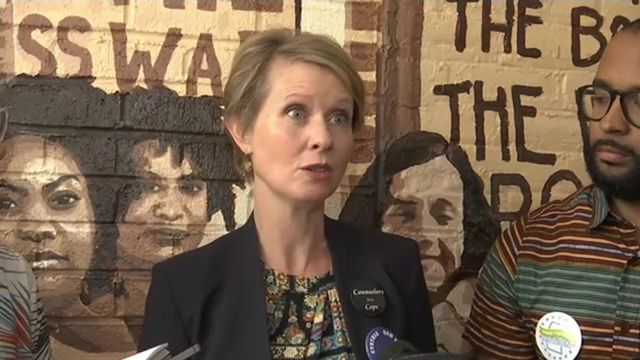 Pablo Villavicencio remains in federal custody after being arrested by ICE agents after he delivered a pizza to the Fort Hamilton Army base in Brooklyn.

As the case attracted significant public attention, both Democratic candidates for governor weighed in.

Secretary to the Governor Melissa DeRosa tweeted out a photo of Governor Andrew Cuomo speaking on the phone with Villavicencio's wife Sandra and telling her, "Anything we can do to help, we will do."

Cuomo's rival for the Democratic nomination for governor, Cynthia Nixon, says there is something more the governor can do, which is allow undocumented immigrants to obtain driver's licenses in New York State. That may have prevented Villavicencio's detention in the first place, since he was asked for identification and could only provide a city issued municipal ID card, not a valid driver's license.

"This is something that Andrew Cuomo could do if he was serious about protecting our undocumented New Yorkers," Nixon said. "He should offer driver's licenses, and this is something he could do. He wouldn't need to wait for legislative solution. He could do it himself today if he wanted to."

Twelve states currently allow undocumented immigrants to get driver's licenses, but when then-Governor Eliot Spitzer tried to do so here by executive order in 2007, some counties rebelled, saying they would refuse, a problem because several counties run their own Department of Motor Vehicles in New York State.

Cuomo says he supports providing the licenses, but he has not attempted to provide them through executive order, and he has not made it a legislative priority.

In states where it is legal, it was done through legislation.

Legal experts say if counties refused to issue licenses, that would end up in court, where the localities would lose. The state DMV sets policy here, and one expert compared it to being like if states refused to perform gay marriage ceremonies, even though it was the law of the land.