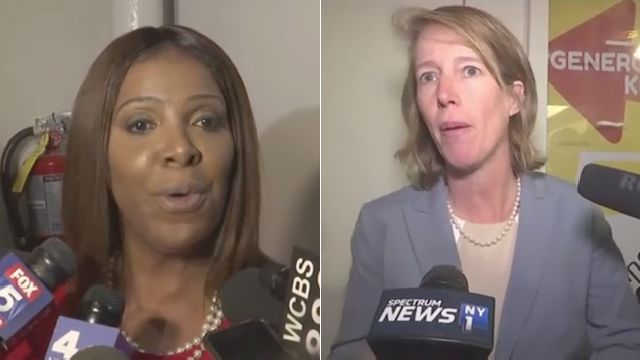 The small but influential Working Families Party (WFP) is leaving its door open to endorse either Public Advocate Letitia James or law professor Zephyr Teachout later this year. But under pressure from Gov. Andrew Cuomo, James has said she is not seeking the party's line.

"The governor tried to put us in a box," said Bill Lipton, the New York state director of the Working Families Party. "He would like nothing better than to have progressives fighting with each other. But we ripped up the box, we rejected the premise. There are two great candidates."

The person who likely missed out the most was Teachout, who ran against Cuomo in the Democratic primary for governor four years ago. It was the WFP that first put her name on the map — although the party didn't endorse her then, and refused to do so again as she mulls a run for New York attorney general.

"Look! I'd love everybody to support me! But at this point, my own decision about whether to run for attorney general has to be about the office. Really thinking through, taking the time for a very serious decision," Teachout said. "It's really an incredibly important office."

The party held its convention in Harlem on Saturday, and formally endorsed Cynthia Nixon for governor and Jumaane Williams for lieutenant governor. The move was not a surprise, after committee members voted to endorse both candidates at their committee meeting in Albany last month.

"When I look outside here, I see a mosaic that is beautiful of white, black, Latino, Muslim, Jew, LGBT, men, women," Williams said to the crowd at the convention. "Everybody is here."

In her acceptance speech, Nixon took aim at Cuomo: "For everyday New Yorkers, rents are skyrocketing while paychecks for working families have flatlined," she said. "Why is this happening? Two words: Andrew Cuomo."

In a statement, the executive director of New York state Democratic Party called the WFP convention a "sideshow." He went on to say that it distracted from its number one priority of getting Democrats elected and taking on President Trump. The state Democratic convention is slated to kick off on Long Island in a few days.