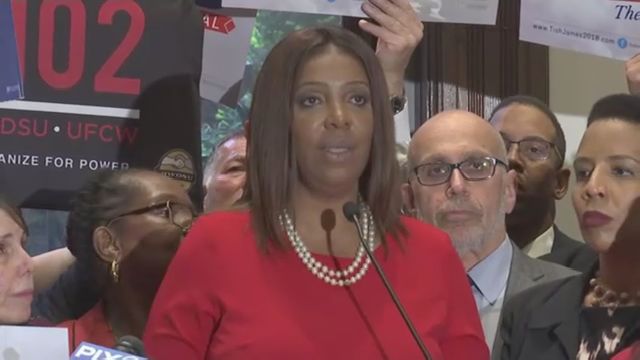 Letitia James, the city's public advocate, is campaigning to be New York state's next attorney general.

She jumped into the race Wednesday, nine days after Eric Schneiderman abruptly resigned as attorney general after a New Yorker article about four women who accused him of physical abuse.

If elected, James would not only be the first African-American attorney general in New York state history, but also the first woman to be elected to the position.

"I will be your champion," she said to supporters as she announced her run.

"We have such a lack of representation of women, and also of people of color, at these state-level positions, and diversity is critical," former City Council Speaker Melissa Mark-Viverito said.

James had been considered a front-runner to be appointed attorney general. The state legislature has the power to name a replacement, but she pulled herself from consideration.

James has also made it clear she is not seeking the endorsement of the small but influential Working Families Party. She was elected to the city council with the support of the progressive third party. Now, she is distancing herself. But she would not explain why.

"At this point in time, my focus is on securing the Democratic nomination," she said Wednesday.

Working Families Party members said Gov. Andrew Cuomo is behind it. He went to war with the party after it sided with his primary opponent, Cynthia Nixon, in the governor's race.

James said she has been calling Democratic leaders across the state to make the case that they should support her campaign. She doesn't have much time, though; the party is slated to meet next for its New York state convention, when party leaders may decide to formally endorse a candidate in this race.