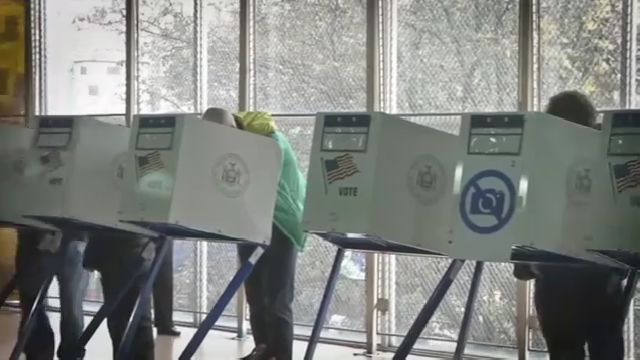 When it comes to voter participation, New York is one of the worst states in the nation.

"New York has some of the lowest turnout in the country," Democratic consultant Nomiki Konst said. "Under presidential primaries, it's the second-lowest turnout, just above Louisiana."

In the wake of the 2016 presidential election, the Democratic National Committee created a commission to focus on increasing voter turnout.

In a tough report, the commission found that even registering to vote in New York can be confusing.

"We have so many different registration deadlines that's preventing as many as 2.8 million people from voting," Konst says. "This is self-inflicted voter suppression by the New York State Democratic Party, who could change the rules so that all of the deadlines are on the closest day to the election — the closest deadline to the election. Right now, they are scattered as far back as a year-and-a half before the election."

Geoff Berman, the executive director of the state Democratic Party, declined to comment on the report's findings.

Gov. Andrew Cuomo is focusing less on creating a unified primary date and instead setting his sights on other initiatives, including early voting and same-day registration. New York is one of only 13 states not to allow early voting.

But that's the bigger picture. Right now, critics say, New York Democratic officials could make at least one easy fix by having one registration day for the primary.

"The New York State Democratic party can change the deadline dates on their own," Konst said. "They don't have to go through the legislative process."

For the first time this year, Cuomo put money in his Executive Budget to institute early voting in New York State.

But the final budget must still be negotiated by the Cuomo and the two legislative leaders, including the Republican Senate Majority Leader.

Republicans have traditionally been against increasing access to the polls; Democrats outnumber Republicans 3-to-1 in New York State.