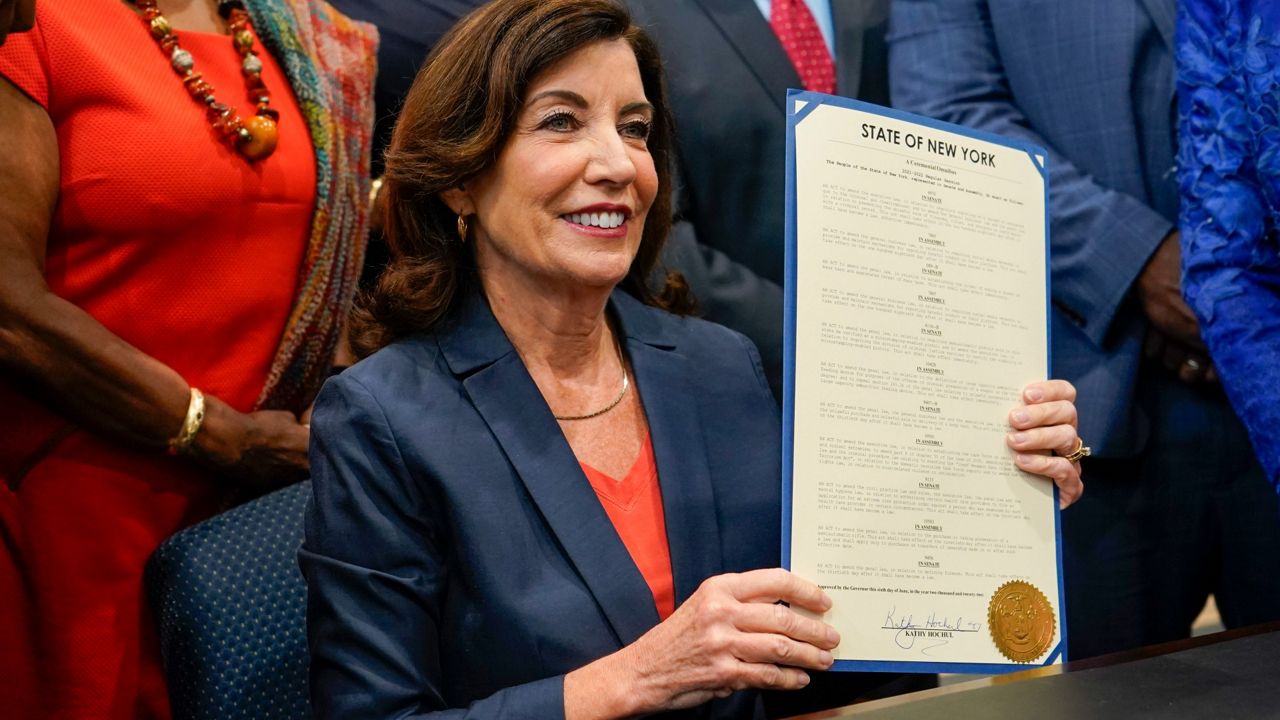 A package of gun reform laws that include the licensing of semi-automatic rifles, a ban on body armor and an expansion of the state's "red flag" provision was given final approval Monday by New York Gov. Kathy Hochul.

The measures signed into law by Hochul are the first to be approved by any state in the wake of mass shootings that have rocked the country in recent weeks, including at a supermarket in Buffalo and an elementary school in Texas.

Hochul, signing the bills in the Bronx surrounded by Democratic officials and gun control advocates, said the U.S. is "a nation in crisis" amid the spate of mass shootings.

"It just keeps happening. Shots ring out, flags come down and nothing ever changes — except here in New York," Hochul said.

New York will now regulate semi-automatic rifles the same as semi-automatic pistols, requiring permits to possess and the license holder to be at least 21 years old.

A law meant to keep guns away from people who are deemed to be a danger to themselves or others will expand to make health care professionals who have examined a person within the last six months eligible to file extreme risk protection orders. Law enforcement and local prosecutors in New York will also be able to file risk protection orders based on credible information that a person is likely to engage in dangerous behavior.

Body vests will also be outlawed, except for law enforcement and first responders as well as people whose employment requires them to wear armor.

Officials at the state Division of Criminal Justice Services will also study the feasibility of microstamping of bullets when fired from a gun, a long-sought measure that has sat on a shelf in Albany for years.

Taken together, the measures approved in the final days of the legislative session are meant to address the shootings in Buffalo and Texas. The alleged 18-year-old gunman is said to have used an AR-15-style rifle. And, despite the existence of a red flag law on the books for the last several years in New York, was able to obtain firearms despite allegedly threatening his high school.

Hochul had pressed lawmakers in the remaining weeks of the legislative session to take up the gun reform measures following the shootings in Buffalo and, 10 days later, in Uvalde, Texas.

New York lawmakers and Hochul also agreed to a suite of measures meant to increase monitoring of hate speech over social media platforms and a crackdown on domestic terrorism after the alleged shooter in Buffalo posted a racist screed online.

A task force to investigate the role social media companies have played in facilitating acts of domestic terrorism will be formed and make recommendations to state officials.

The bills were approved over the objections of Republican lawmakers and gun-rights advocates, who had argued the measures would not have a demonstrable effect on keeping New Yorkers safer and did not do enough to address mental health concerns.

Congress is yet to take action as President Joe Biden has urged lawmakers at the federal level address gun reform as well following the shootings.

"Today is a start, and it's not the end," Hochul said. "I will not rest until we keep our families and our kids safe."