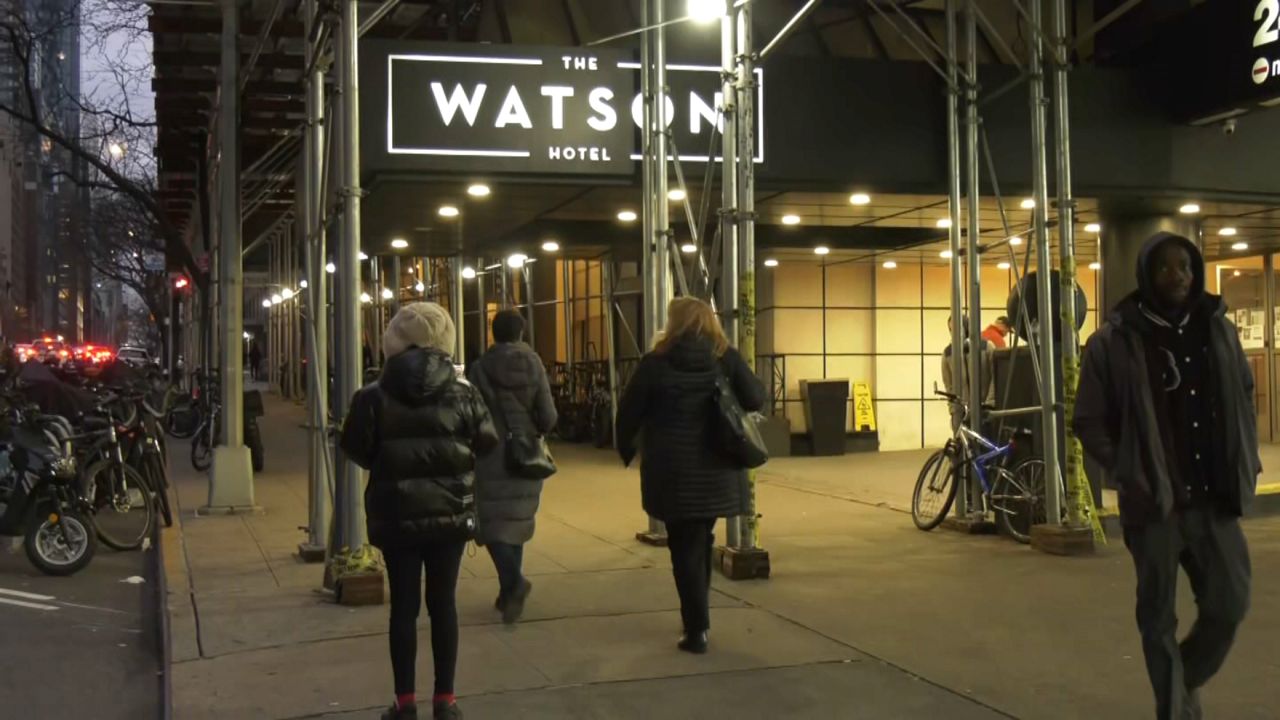 The Watson Hotel will transition to serve families with children who are seeking asylum, officials said. (NY1 Photo)

The Brooklyn Cruise Terminal will be the site of the city’s latest humanitarian center to handle the influx of migrants, officials said.

The Humanitarian Emergency Response and Relief Center will assist single adult men who will move from the Watson Hotel in Manhattan to the Brooklyn Cruise Terminal.

The center will serve approximately 1,000 asylum seekers and offer the same services that have already been provided at other centers, such as onsite medical, food, laundry and reconnections.

The Watson Hotel will transition to serve families with children who are seeking asylum, officials said.

But advocates are critical of opening a center at the terminal, calling it a “high-risk flood zone.”

The Brooklyn Cruise Terminal "will needlessly expose future residents to the elements during some of the coldest months of the year,” the Legal Aid Society and Coalition for the Homeless said in a statement Saturday. “Continuing to move asylum seekers around the boroughs like chess pieces is callous and indicative of City Hall's failure to competently manage this crisis.”

According to Fabien Levy, Adams' press secretary, the new center will be a "fully-enclosed, temperature-controlled, indoor building with privacy partitions."

The city continues to do its part to shelter asylum seekers.

To clarify inaccurate info: The next humanitarian relief center will open at Brooklyn Cruise Terminal for single adult men in a fully-enclosed, temperature-controlled, indoor building with privacy partitions not tents.

This announcement comes a week after Adams’ trip to El Paso, Texas, where he said New York asylum seekers are overwhelming the city.

The mayor has continuously put pressure on the Biden administration and Washington to step up their aid for migrants.

Earlier this week, Adams laid out a six-point plan, which requires help from the federal government, at the U.S. Conference of Mayors In Washington, D.C., on how to deal with the growing migrant crisis in the nation.

"A true solution to this problem is going to come from the executive branch, and from bipartisan effort in our Senate and House," Adams said Wednesday at the conference.