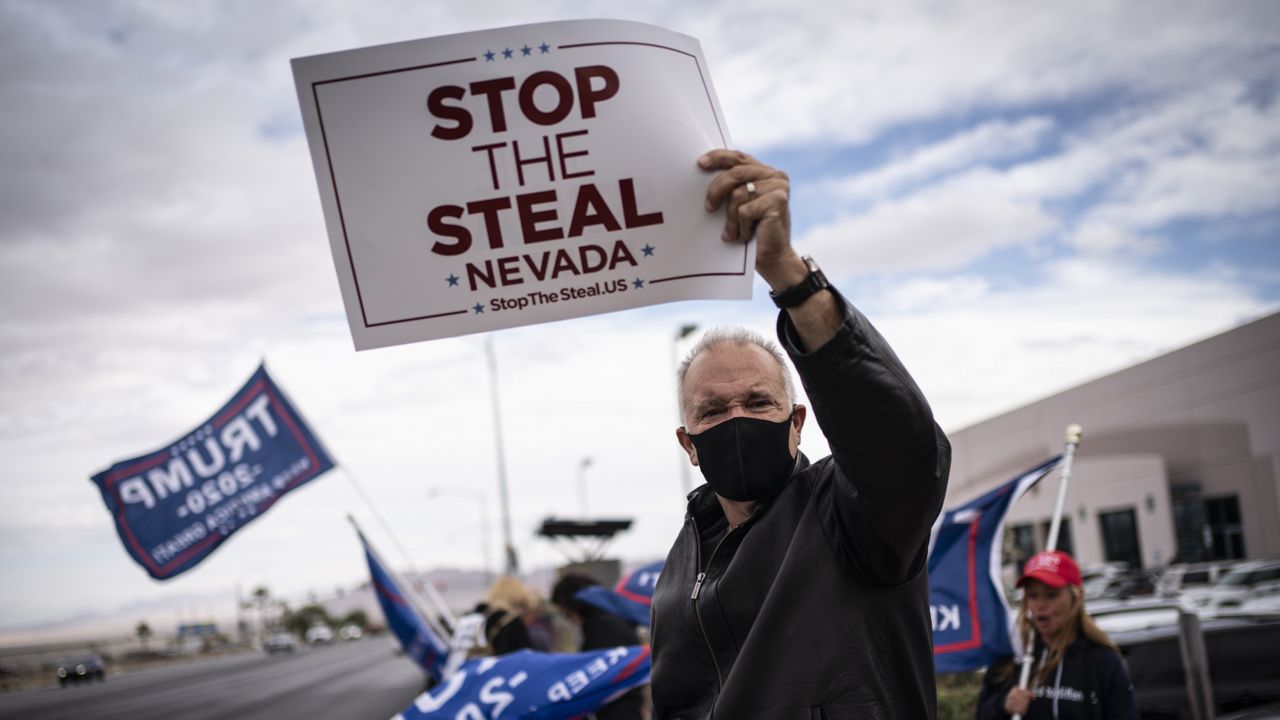 The 2022 midterm election season is in full swing, and many high-profile races will be on the ballot in November.

One statewide office is getting new attention because of former President Donald Trump’s continued – and unfounded – claims that the 2020 election was stolen: secretary of state.

In terms of the federal government, the secretary of state represents the United States in foreign policy; it's a position currently held by Antony Blinken.

But at the state level, the secretary of state often handles job licenses, from accountants to well drillers – and they are supposed to be impartial.

“It really hasn't been a very high profile office,” Louis Jacobson, a senior correspondent at PolitiFact and columnist at Sabato's Crystal Ball told Spectrum News. “Historically, it has been very much a straight shooter type of position [...] even though people ran for the office with a D or an R by their name.”

In recent years – largely in the wake of the 2020 elections – the statewide positions have taken on greater importance. The secretary of state is also the chief election officer in 40 states, giving the role oversight of the state's election results

A bevy of polls have shown how Americans’ confidence in election integrity has waned in the nearly two years since the last presidential election. A recent survey from the New York Times / Siena College found that 58% of respondents thought the U.S. system of government either should be completely replaced or needs major reform; and at least 42% said they were not at all confident in mainstream media’s ability to accurately and fairly portray elections.

An ABC News / Ipsos survey, conducted a year after the Jan. 6 insurrection at the U.S. Capitol, found that 41% of Americans were not confident in the integrity of the U.S. electoral system, a view that is particularly strong among Republicans.

Some candidates are seizing on that distrust – candidates who, if elected, could very well oversee the next presidential election in key battleground states.

Perhaps the most well-known state-level secretary of state is Brad Raffensperger, who famously resisted Trump’s call for him to “find enough votes” to reverse his loss in Georgia, which Biden ultimately won by just under 12,000 votes.

Raffensperger's actions earned him a book deal, bipartisan praise and a the opportuinty to testify at both a high-profile Jan. 6 panel hearing and before a Georgia grand jury investigating possible illegal interference in the state's 2020 election. It has also earned Raffensperger the ire of the former president, who launched insults at the state official, going so far as to accuse his brother of being an operative for China. Raffensperger does not have a brother. 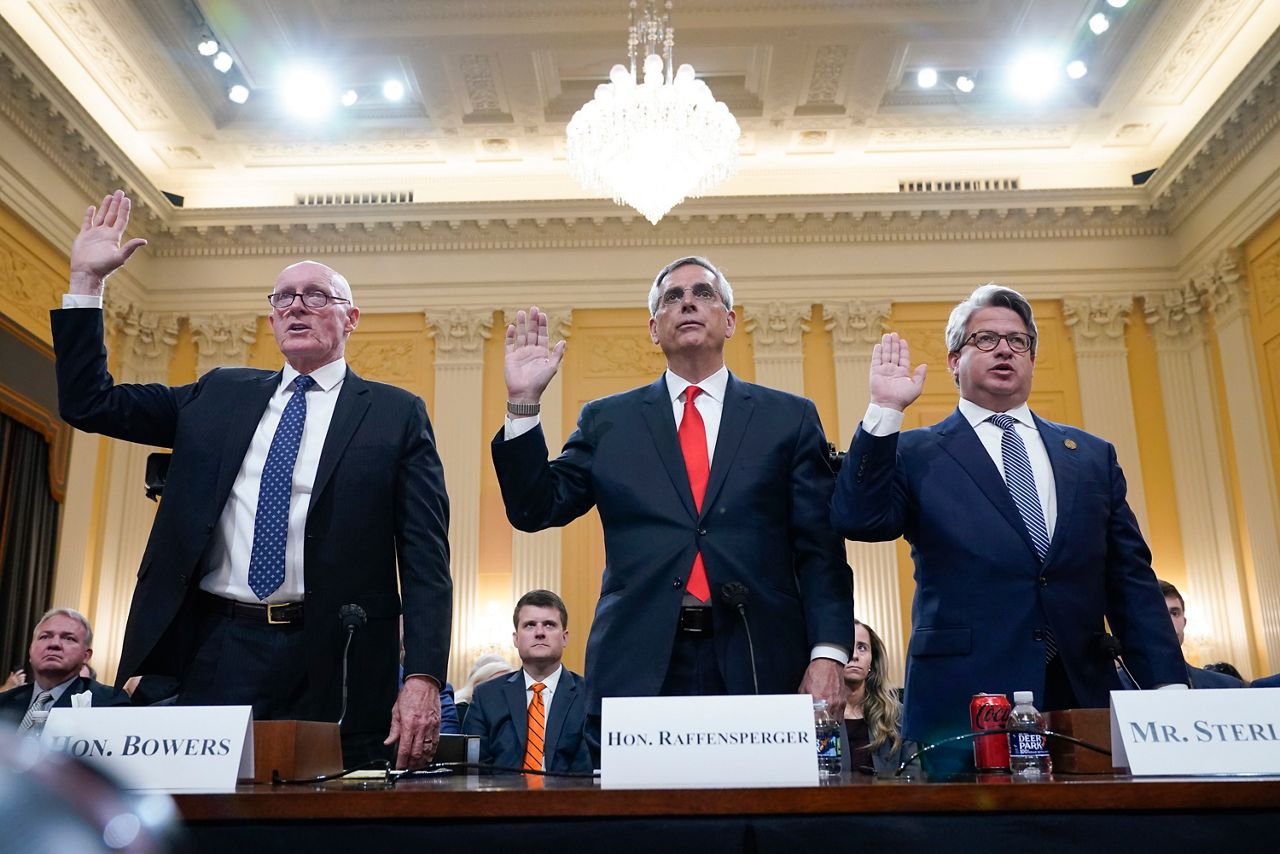 Brad Raffensperger, center, and others are sworn in to testify as the House select committee investigating the Jan. 6 attack on the U.S. Capitol holds a hearing at the Capitol in Washington, June 21, 2022. (AP Photo/Jacquelyn Martin, File)

Still, Raffensperger in May easily won the Republican primary for re-election in Georgia, beating out Trump-backed candidate Rep. Jody Hice, who was critical of how the secretary of state handled the 2020 election.

“People should have confidence in the system,” Raffensperger told Spectrum News, saying his guidance stretches for states “across the country.”

But he is largely an outlier in how much faith he has in the 2020 election.

Maggie Toulouse Oliver, a Democrat serving as New Mexico’s secretary of state and who was president of the National Association of Secretaries of State during the 2020 election, hopes to address just that issue with her colleagues, seeking to “ask them to really help us push back against this narrative that's really destructive to our democracy as a whole.”

“I wish there was more political courage,” she added.

The ripple effect of Trump’s lies about the veracity of the 2020 elections stretched to Toulouse Oliver’s home state, which Biden handily won with 54% of the vote compared to Trump’s 43%. But the former president called out election officials, ginning up protests and death threats – some of which were aimed at New Mexico’s secretary of state.

“I did have to relocate for a period of several weeks during the Christmas holiday for my own safety and for my family's safety,” Toulouse Oliver told Spectrum News, adding: “Seeing threats to my life and threats to my family's life because of folks being unhappy with the outcome of an election result was absolutely unprecedented and absolutely terrifying.”

Still to this day, there are those – both candidates and sitting secretaries of state – who are less than eager to fully push back against Trump’s lies about the election.

“When people say, ‘was the 2020 election stolen?’ it's an unknowable thing,” Frank LaRose, Ohio’s secretary of state, told Spectrum News. Trump picked up 53% of the votes in Ohio’s 2020 presidential race compared to Biden’s 45%.

“My gut tells me that the bad things that happened were probably not enough to push one candidate over 270 electoral votes versus another. But nonetheless, there are things that happened that shouldn't have happened,” LaRose added, pointing to new voting rules enacted during the grips of the pandemic, though he says they weren’t illegal.

He later acknowledged: “There's only one commander in chief. That person is Joseph Biden.”

In three swing states, three candidates for secretary of state are running on falsehoods about 2020. All are backed by Trump. 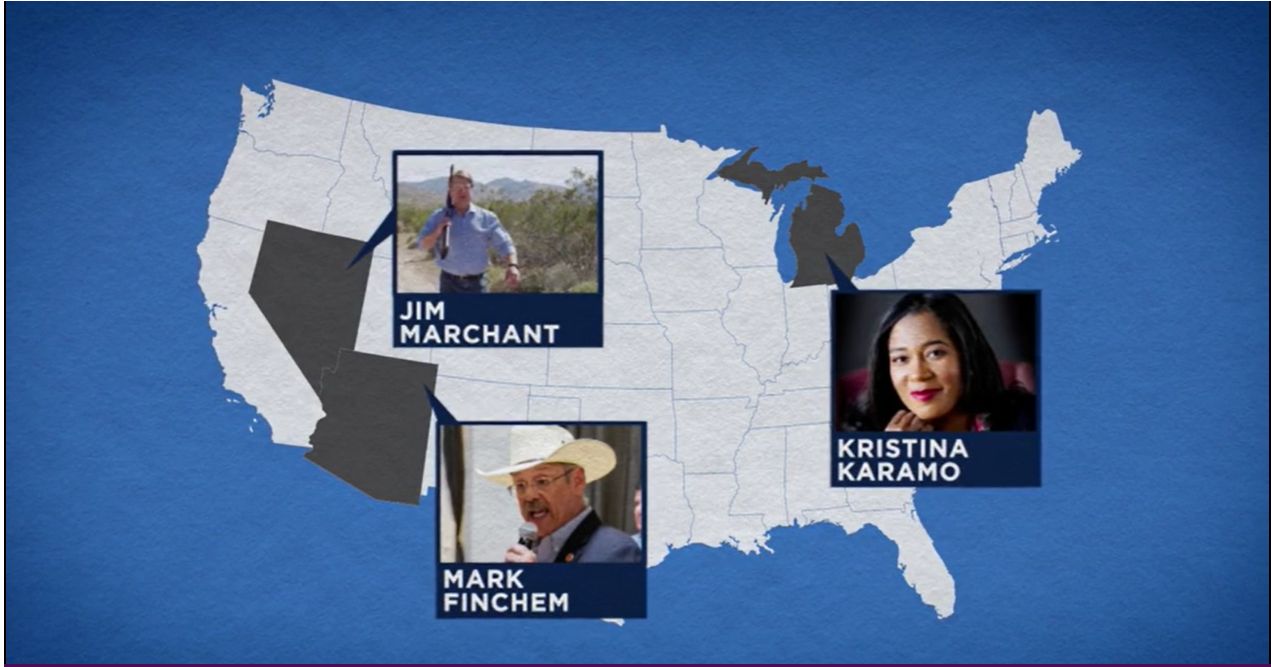 One is Arizona’s Mark Finchem, who spoke to constituents the day before the riot at the Capitol on Jan. 6, saying: “When you steal something, that’s not really a win. That’s a fraud.”

Finchem has doubled down on those statements during his campaign for secretary of state – and now, more than 18 months later, says Joe Biden’s win in Arizona should be decertified.

In Michigan, secretary of state candidate Kristina Karamo has Trump’s endorsement pinned atop her Twitter feed, in which the former president said Karamo is strong on the “massive crime of election fraud,” encouraging readers to look at alleged fake election results in Detroit. That claim has been repeatedly disproven, and post-election audits found Biden won Michigan by over 154,000 votes.

In Nevada, election security has become a flashpoint in the secretary of state race, with both Marchant and his Democratic opponent Cisco Aguilar trading jabs about who would best protect voting rights in the Silver State.

“Voting is a right not a privilege, and that right is under the most dangerous attack in decades. We need to get out there and defend it,” Aguilar wrote in a Twitter post on August 2.

Voting is a right not a privilege, and that right is under the most dangerous attack in decades. We need to get out there and defend it.

Thats why I’m grateful to @DemVictoryNV for having me as a part of this important conversation, and to everyone who came to Know Your Rights! pic.twitter.com/w5wkdBvfqz

In all three states, Trump’s lies about the election have been repeatedly disproven.

Arizona’s attorney general on Monday issued a report that debunked Trump’s and his allies' claims that 282 votes cast came from dead voters.

“After spending hundreds of hours reviewing these allegations, our investigators were able to determine that only one of the 282 individuals on the list was deceased at the time of the election,” AG Mark Brnovich wrote in a letter to state Sen. Karen Fann, who advanced the complaint to his office last year. “All other persons listed as deceased were found to be current voters.”

In Michigan, three of Trump’s lawsuits were rejected by separate judges and panels by mid-December 2020, with Trump dropping at least three others. Nine lawyers connected to the Trump campaign lawsuits were later penalized for their involvement in the suits, with U.S. District Judge Linda Parker saying the attorneys “scorned their oath, flouted the rules, and attempted to undermine the integrity of the judiciary along the way.”

Also in December 2020, Nevada’s state Supreme Court unanimously agreed to reject Trump’s appeal to overturn the results of the election in the state, with the six members of the court writing they were “not convinced” the Trump campaign had identified any flaws in a previous order denying a reversal.

Come January, the newly-elected secretaries of state in Arizona, Michigan and Nevada will oversee statewide elections for the three swing states – and in a highly competitive election cycle, no less.

None of the three candidates returned Spectrum News’ requests for comments.

The last election seemed to cast a shadow over this year’s NASS convention. And it remains unclear how far officials will go to build trust in the next one.

Tahesha Way, New Jersey’s secretary of state and the newly-elected NASS president, is not particularly interested in talking about the differences people carry from the 2020 election, saying she instead hopes to work within the organization to “continue to uplift.”

“Well, you know what? I don't have a crystal ball and I'm not here so much to speak about what is occurring on the outside politically,” she told Spectrum News when asked what she would do if a new member denied the results of the 2020 elections. “What I'm here to do is make certain that NASS is at the forefront and that we can come together, convene.”

And just in refusing to shoot down Trump’s erroneous claims, some experts say those secretaries of state could sow further doubt into election integrity.

“It could pose problems even if they don't do anything actively, if they just refuse to do something, that that could be potentially a stick in the spokes of the wheel,” PolitFact’s Louis Jacobson told Spectrum News.

And there are a number of scenarios that could play out should those candidates who continue to deny the results of the 2020 race win their own elections.

“There is a lot of mischief they could do,” said David Becker, who runs the Center for Election Innovation & Research, a non-partisan, non-profit focusing on fair elections. “We're in a really dangerous position right now as a democracy.”

“It's very, very hard for a corrupt secretary of state to install the loser of an election as the winner, because we have transparent processes, because we have courts that will review these things,” Becker continued. “But they could certainly create chaos and confusion in an election that could ultimately lead to things like political violence.”

That violence has already played out once – in the violent assault at the U.S. Capitol on Jan. 6, 2021. And it remains to be seen what happens in this year’s midterms, and how those races might impact future elections.