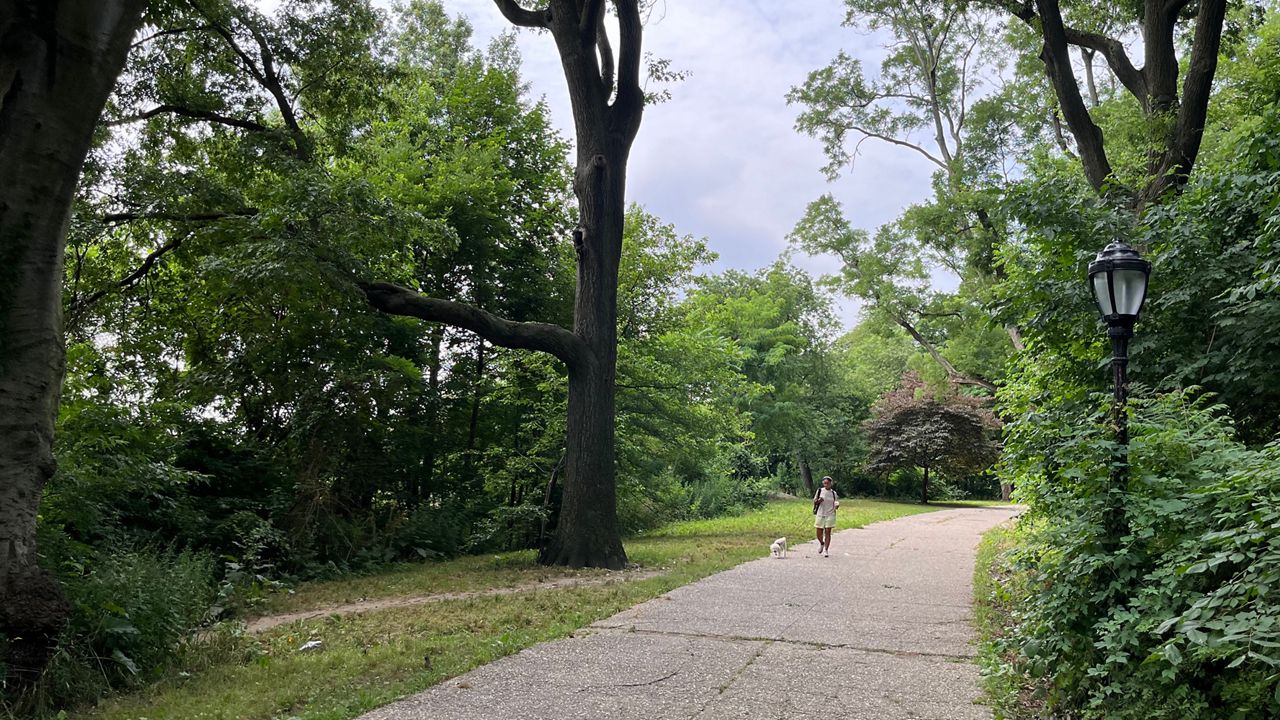 St. Nicholas Park in Harlem is one of the city's older parks, but faces ongoing gaps in maintenance that volunteers help fill. (NY1/Ari Ephraim Feldman)

At Harlem’s St. Nicholas Park, it’s all hands on deck to keep the hillside walking paths, lawns and bluestone staircases in the 120-year-old park in good repair.

Volunteers, funded by private grant money, shovel mulch across the sloping dog park and plant new garden beds where there were tangles of weeds. High school students by the dozens fan out to collect trash. This weekend, a group of Boy Scouts began clearing out drains clogged with dirt and ragweed.

Yet the trash returns; the purple-flowered sage shrubs and red smoke bushes get choked out by invasive interlopers. One area, cleared of weeds last summer, has a new orchard of unsightly mugwort stalks, nearly waist high.

The city workers who tend St. Nicholas, including its lone gardener for 23 acres, do the best with the resources they have, Karen Asner, a volunteer there for five years, said during a recent walk through the park. But the funding to make the park truly shine — and take much of the burden of maintenance away from volunteers — just isn’t there, she said.

“You never get ahead,” Asner said. “You’re just trying to maintain.”

After two years of a pandemic, during which parks took on a renewed importance as refuges of safe socializing, advocates for parks have sought to improve equity across the city for spending on maintenance, repairs and upgrades to the city’s green spaces.

Coming into this year, advocates thought they had reached a monumental achievement toward that goal: During the campaign, Mayor Eric Adams promised to commit 1% of the city’s budget to parks. Yet the budget that ultimately went into effect at the beginning of this month fell hundreds of millions of dollars short of that goal.

To fix long standing inequities between the levels of cleanliness, attention to landscaping and capital investments across 1,700 parks, advocates say that the city needs to double down on its efforts.

“What we’re looking at there is a short-staffed agency that is doing its best to reach all of these parks in all of these areas in the city,” said Adam Ganser, the executive director of New Yorkers for Parks. “It’s really an impossible job.” 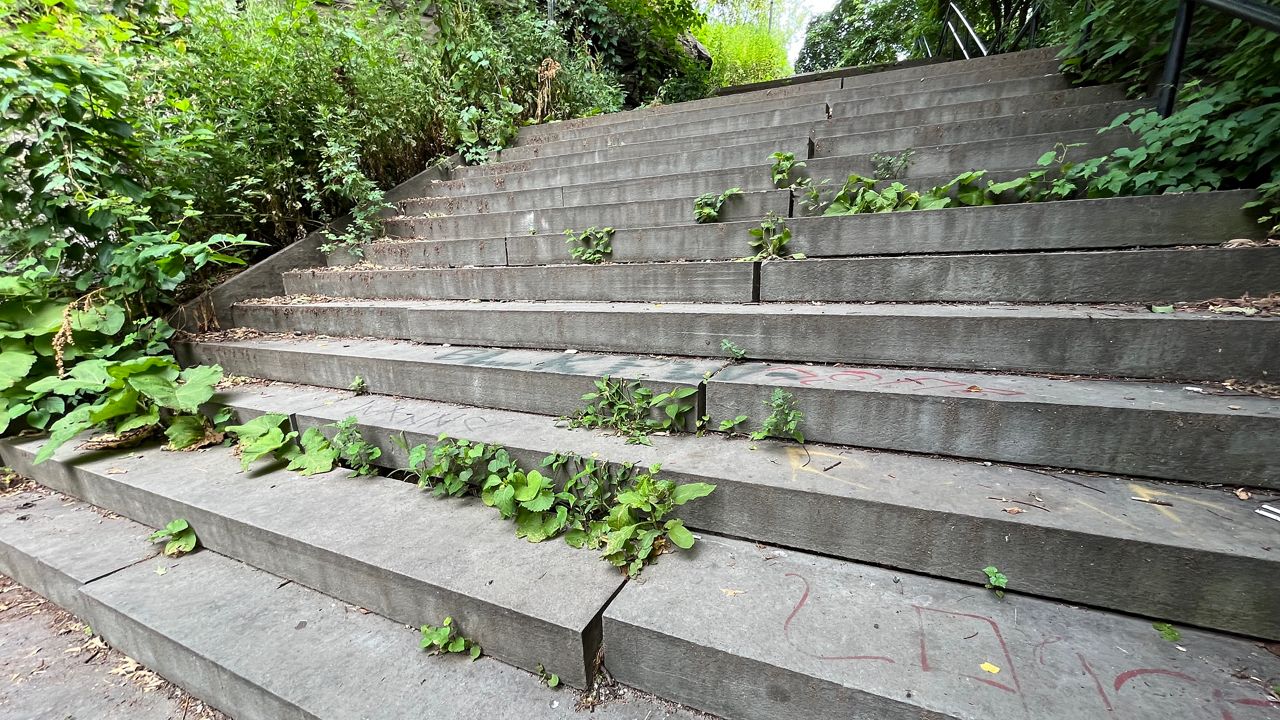 As the mortar between St. Nicholas' bluestone stairs disintegrates, water freezes and thaws between the blocks, dislodging them and allowing weeds to grow in the gaps, further widening space between the steps. (NY1/Ari Ephraim Feldman)

The city notes that the latest budget represents the largest dollar amount ever committed to the parks department; Adams has called the funding a “down payment” toward reaching the 1% milestone during his tenure as mayor.

“This budget demonstrates the Mayor’s continued strong commitment to improving our city’s parks and maintaining the state of good repair for our many park properties, and working towards a greener and more equitable future for our park system,” Crystal Howard, a spokesperson for the department, said in an emailed statement.

New York City’s park system, which covers about a sixth of its land area, often scores high on national rankings; in the recently released 2022 ratings from the nonprofit Trust for Public Land, it earned 10th place, behind Seattle but ahead of Portland, Oregon.

The city earns high marks for access and investment, but the stats hide some pervasive problems. While 99% of residents are within 10 minutes of a park, the median park size here is tiny, at just one acre — smaller than any other major city.

Access to parks is also dependent on where you live: Neighborhoods with a majority of Black, Hispanic or Asian residents have nearly a third less park space than majority white neighborhoods, according to the Trust for Public Land report.

“The correlation between neighborhoods like mine, that got hit the hardest by the pandemic, and having the least amount of green space, is very stark,” said Councilman Shekar Krishnan, who represents Jackson Heights and Elmhurst in Queens. Krishnan’s district ranks 50 out of 51 city council districts for green space per capita, according to data compiled by the council.

In recent decades, the system has also seen conservancies and private spending drive improvements and impeccable conservation at jewel-in-the-crown parks like Central Park and Prospect Park, while parks of all sizes elsewhere struggle with day-to-day operations. 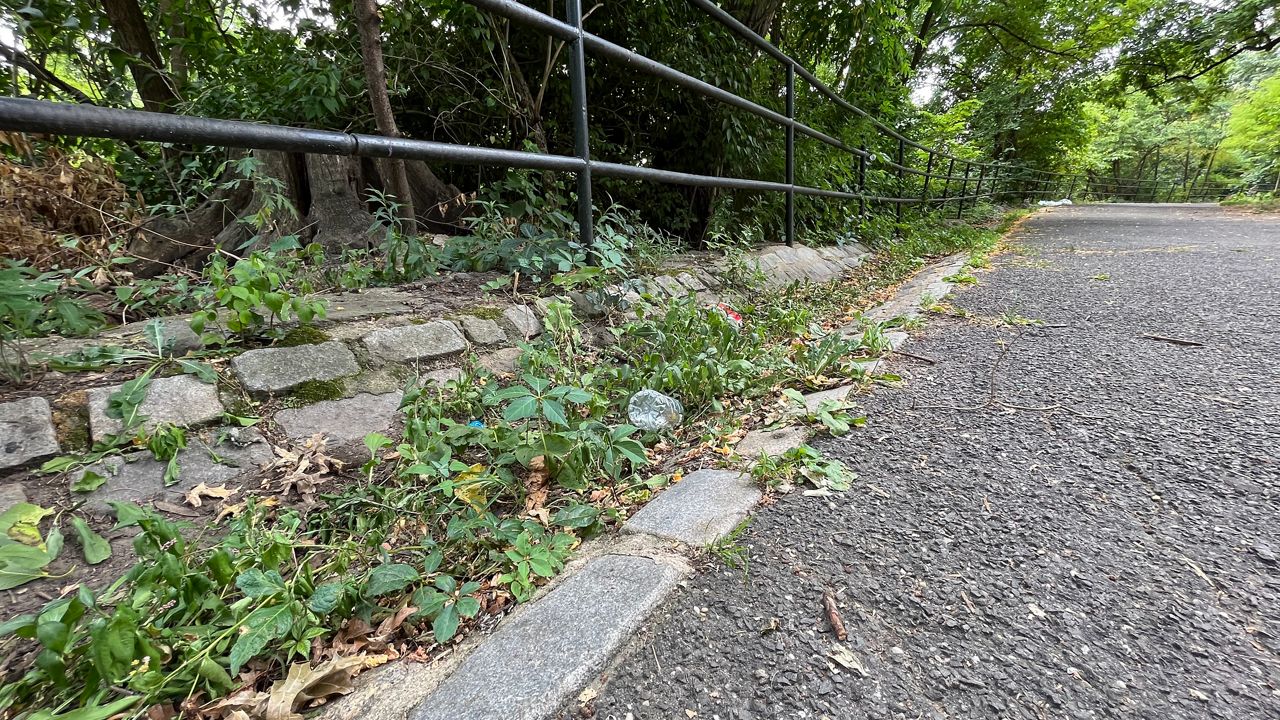 These stone French drains were part of the park's original design, meant to ferry water away from walking areas. Weeds and dirt now clog them and push water onto the paths. (NY1/Ari Ephraim Feldman)

Two of the newest parks to the system — the High Line, built on old rail tracks in Chelsea, and the Little Island, an oasis off the West Side that sits perched on cement stilts above the Hudson River — were funded with private dollars, and serve as tourist draws for Lower Manhattan.

The conservancies are so well-funded with private contributions that they provide maintenance help to other city parks; Asner said that lawns in St. Nicholas Park are mowed by workers from the Central Park Conservancy.

“Parks in poorer areas often don't have the benefits of conservancies,” said Carter Strickland, the New York state director at the Trust for Public Land. “They really do rely on that public budget.”

Strickland said he supported conservancies, since a dollar not spent on Central Park is one that can go to a space with greater need. But, he added, the city needs to spend significantly more money in order to make sure that all neighborhoods have parks that combine well-kempt sports facilities, cared-for green spaces and adequate space that make those flagship parks so beloved.

The Trust for Public Land has pegged the system’s need for new capital spending at more than $1 billion over four years.

“It can’t be right for New Yorkers to have access to a park within a 10-minute walk, and that park is all asphalt,” Krishnan said.

Yet much more money is needed, advocates said. Ganser said that Adams will be measured in part by whether he can quickly achieve the billion-dollar parks operating budget that he promised in his campaign.

“What we’d love to see is more detail and more specificity about when we will get to that number,” Ganser said.

Parks department leaders say that in recent years they have reoriented spending, planning and staffing around improving equity across the system.

In the recent budget, the department received funding to increase the number of its maintenance positions by more than 10%. Those positions will be distributed to parks with the greatest need in the neighborhoods identified by the city in 2020 as having been significantly impacted by the pandemic, as well as by preexisting economic and health disparities, according to Mark Foch, the department’s chief operating officer.

At the same time, the department’s internal scoring system for cleanliness gives the city high marks. Foch said that workers doing pop-up inspections after the July 4 weekend of the 100 most intensively used sites for gatherings, such as barbecues, gave all the sites passing grades.

The city is also emphasizing more tree planting in some of the city’s warmest neighborhoods, where existing tree cover is below city average, said Neve Strauss, the parks department’s director of street tree planting. In the Bronx, which has the highest share of such communities, the city planted nearly 5,000 new trees between 2018 and 2021, about half of all new trees planted by the parks department in high heat areas during that time.

Even with more funding, Strauss said, planting more trees than the 20,000 per year that already go in the ground would take time to figure out, given the logistical and structural challenges of putting trees in New York City soil.

“It’s difficult to be able to imagine doing more than that right away,” Strauss said. “It’s scaled up as it is.”

Moving forward, Krishnan said, the city needs to get creative about how it improves parks in historically underserved areas. That may mean overhauling existing parks to add more green space or upgrade playgrounds, or using the city’s control over streets to expand medians or create so-called linear parks.

That will also mean transforming the city’s park construction process, Krishnan said, which currently takes so long that council members joke that any new park initiated during one’s tenure at City Hall will only open in time for the next officeholder to cut the ribbon. Krishnan said he is considering legislation that would create a construction authority for parks with wider latitude to build and renovate park space more efficiently.

“It shouldn't have taken us a pandemic to appreciate that our parks are restorative spaces that are so crucial for our mental health and wellbeing,” Krishnan said. “We should have always seen parks in that way.”

In the meantime, volunteers like Karen Asner will continue holding up their end of the informal arrangement between the parks department and the New Yorkers who love the parks too much to see them fall into disrepair.

“Nobody wants it to be in this condition, and certainly not them either,” Asner said. “Without the actual staff and tools, it’s just a neverending losing battle.”

Editor's note: This article has been updated to correct the parks department budget for the current fiscal year. 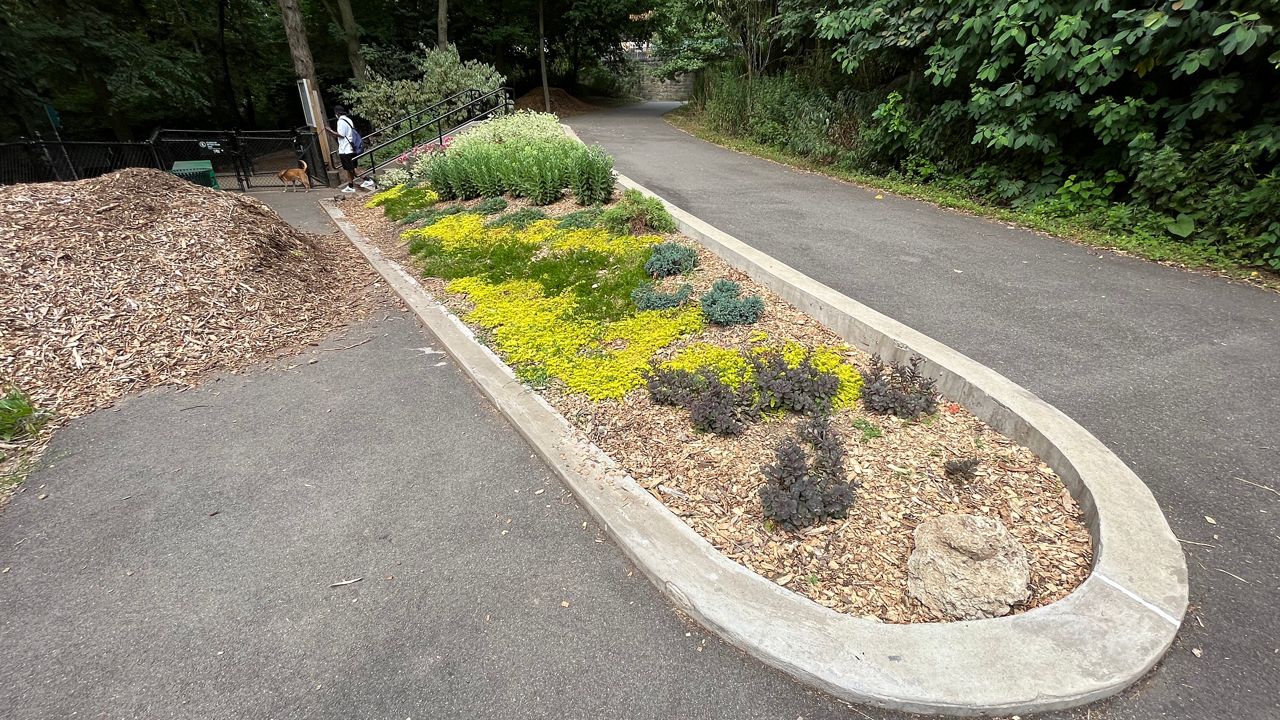 Volunteers cut down a wild grove of tall weeds in this plant bed near the dog park, filling it instead with native grasses and shrubs. Karen Asner said that with the weeds gone, visitors to the park have better visibility as they walk, improving their sense of safety in the park. (NY1/Ari Ephraim Feldman)