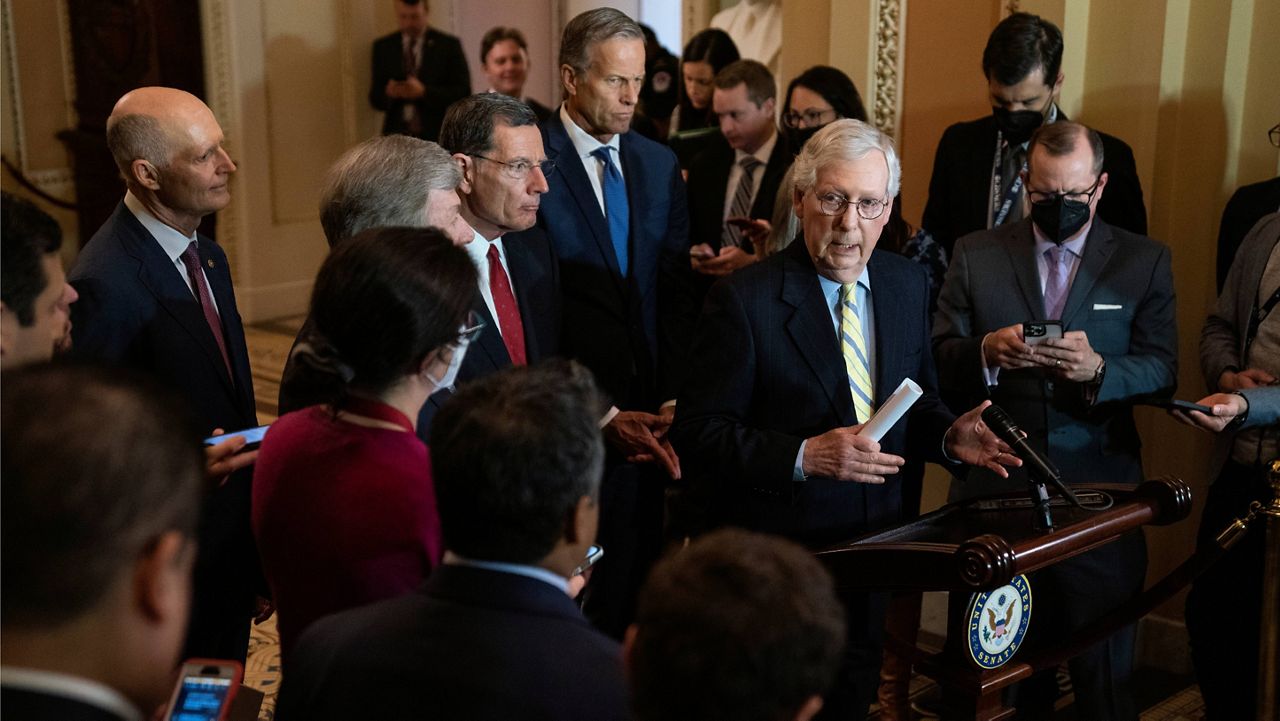 Senate Republicans blocked a procedural vote Thursday to move forward a House-approved bill aimed at combatting domestic terrorism, passed in the aftermath of the racist shooting at a grocery store in Buffalo, New York, earlier this month.

The bill, known as the Domestic Terrorism Prevention Act, would have established offices at the Department of Homeland Security, the Department of Justice and the FBI specifically concentrated on combatting domestic terrorism.

It would have also specifically created an inter-agency task force to “analyze and combat white supremacist and neo-Nazi infiltration of the uniformed services and federal law enforcement agencies.”

The bill passed the House last week in a near party-line vote, with just one Republican, Rep. Adam Kinzinger of Illinois, voting with Democrats in favor of the measure. The final Senate vote was 47-47, with Senate Majority Leader Chuck Schumer changing his "yes" vote to a "no" in order to "bring (the bill) up at some future point."

Schumer, whose home state of New York was targeted by a white supremacist in the Buffalo shooting, lambasted Republicans for their resistance to the bill, particularly in the wake of yet another mass shooting at an elementary school in Texas that left at least 19 students and two adults dead.

“Yet the MAGA Republicans don't want to get the results,” he continued. “They're ossified in their opposition to any action on gun safety, no matter the cause of violence or the cost on families, nothing seems to move them.”

The legislative effort by Democrats was not new. The House passed a similar measure in 2020 only to have it languish in the Senate. And since lawmakers lacked the support in the Senate to move forward with any sort of gun-control legislation they see as necessary to stop mass shootings, Democrats instead put their efforts into a broader federal focus on domestic terrorism.

But Republicans opposed the scope of the bill, many saying it did not offer a specific enough definition of “domestic terrorist” or that there are other, better ways to curb gun violence.

“The problem we have is that we have a bunch of people who define anyone they disagree with as terrorists, as extremists,” Sen. Marco Rubio, R-Fla., said, per POLITICO. “We’ve reached a point in America now where the term ‘extremist’ is applied too liberally to people, that there’s deep concern about how these entities will be used."

Kentucky GOP Sen. Rand Paul labeled the bill “insulting,” saying it is the Democrat’s “plan to name our police as white supremacists and neo-Nazis.”

The divergence highlights the stubborn gap between Democrats and Republicans over domestic terrorism in the U.S. and how it should be defined and prosecuted.

For decades, terrorism has been consistently tied with attacks from foreign actors, but as homegrown terrorism, often perpetrated by white men, has flourished over the past two decades, Democratic lawmakers have sought to clarify it in federal statute.

Supporters of the House bill said it would fill the gaps in intelligence-sharing among the Justice Department, Department of Homeland Security and the FBI so that officials could better track and respond to the growing threat of white extremist terrorism.

Under current law, the three federal agencies already work to investigate, prevent and prosecute acts of domestic terrorism. But the bill would require each agency to open offices specifically dedicated to those tasks and create an interagency task force to combat the infiltration of white supremacy in the military.

The Congressional Budget Office estimates the bill would cost about $105 million over five years, with most of the money going toward hiring staff.