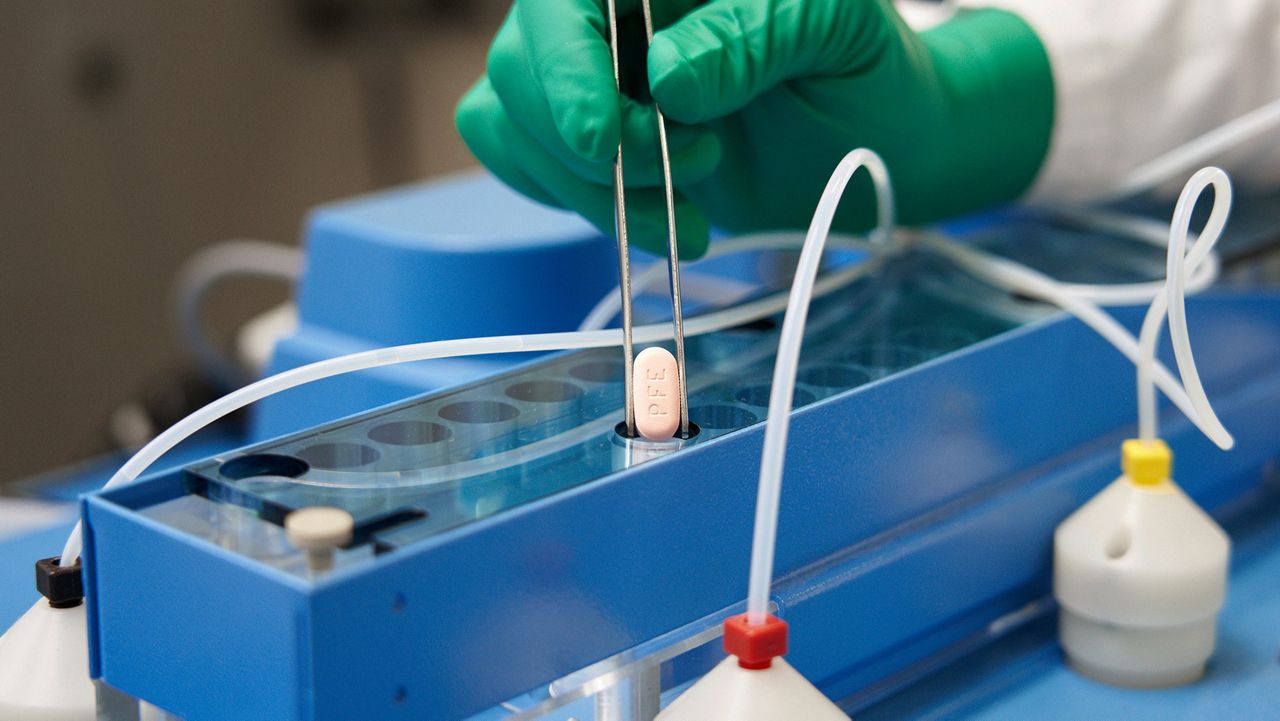 A Pfizer technician handles one of the company's COVID-19 Paxlovid antiviral pills. (Pfizer via AP, file)

One pharmacy delivers the bulk of antivirals for the city. Is that enough?

On Sunday, Dr. Mark Horowitz received a call from a longtime patient, the kind of call he and many city doctors are getting more and more in recent weeks. The man — a vaccinated and boosted 69-year-old, two-time cancer survivor — had tested positive for COVID-19.

Horowitz decided to prescribe the antiviral drug Paxlovid; the medication, when taken starting as soon as possible after a positive test, can dramatically reduce the likelihood of hospitalization for at-risk patients.

New York City residents can have Paxlovid delivered for free through a city-funded service, which is run by a San Francisco-based digital pharmacy called Alto.

Typically, Horowitz said, the dozens of patients he has prescribed the drug to in recent months have received it within hours. This time, however, Horowitz’s patient waited until 10 p.m. Monday evening — 32 hours after Horowitz sent in his prescription.

“​​This is a gentleman who is clearly at risk of progression,” said Horowitz, who maintains a practice in Lower Manhattan, adding that several patients in recent days have faced nearly 24-hour waits for antivirals. “I would have liked him to have had it sooner.”

Amid yet another rise in COVID-19 cases, Alto has seen its average wait times for delivery of the crucial antivirals increase in recent months. Headways reached nearly 20 hours at the beginning of April before declining to under 15 hours in the week ending April 25, according to data provided by the city.

The wait times have grown as Alto has been working “around the clock” to double its staff to meet rising demand for the drug, the company said.

These logistical problems are coming as the White House plans to increase the amount of antivirals available, as well as the number of clinics and pharmacies that can distribute them.

With the impact of the latest BA.2 variant of the coronavirus still unclear, doctors and public health experts are voicing their concerns about the city’s ability to effectively distribute antivirals. They questioned the city’s decision to contract with a relatively new pharmacy that did not have ties to local health networks, sidestepping the clinics and brick-and-mortar pharmacies that form the front line of health access for much of the five boroughs’ residents.

“Now that we're seeing that supply is increasing to the point where, really, it's the distribution that is the limitation, not the supply, it makes sense to distribute as widely and through as many points as possible,” Josh Michaud, associate director for global health policy at the Kaiser Family Foundation, said.

In an emailed statement, Michael Lanza, a spokesperson for the city’s health department, said that the increase in wait times was “temporary.”

“Alto committed the resources necessary to ensure that wait times improve and remain reasonable, and have been successful in doing so,” Lanza said.

Michael Krueger, the chief marketing officer of Alto, said in an email that company surveys of customer satisfaction with its deliveries “are 95% positive.”

“We continue to be in constant communication with the Department of Health to plan, monitor, and react to case counts,” Krueger said.

In December, the city gave Alto a $2 million contract to manage its distribution of Paxlovid. (Lanza, the health department spokesperson, said Alto began its work before the contract was finalized because it was for emergency procurement; the contract is under review by the city comptroller’s office.)

Paxlovid is one of two antivirals with emergency authorization from the federal government that are now widely available to treat COVID-19 during a course of the disease. Clinical trials for Paxlovid conducted by Pfizer, which manufactures the drug, found that it reduced risk of hospitalization or death for high-risk patients by nearly 90%.

The drug is meant to be taken as soon as possible after the onset of symptoms, for five days. Delays in beginning the course of the medication can slightly alter its effectiveness, according to data from Pfizer.

City residents can call a hotline (212-268-4319) and be connected to physicians who will direct them to a test, and then provide a prescription for the drug. Alto then delivers the drug, for free, to the resident’s home. (Residents can also call a federal hotline, 1-888-720-7489, and be directed to a pharmacy where they can receive a test and, if they’re positive, free antiviral drugs.)

Since December, Alto has delivered 13,000 courses of the drug around the five boroughs, according to the city.

When Mayor Eric Adams tested positive for the virus earlier this month, he took oral antiviral treatments, according to City Hall. Adams, 61, has said he is in remission from diabetes, a major risk factor for severe COVID-19. A spokesperson for Adams declined to say whether Adams took Paxlovid, or if the drugs were delivered via Alto.

While the drug is available at about 230 city pharmacies, Alto’s supply of the drug is by far the largest, according to data from the federal site: It has about 4,500 courses on hand, compared with 80 doses for the next largest supply in Manhattan, at the Boriken Neighborhood Health Center in East Harlem.

The city says that prescriptions confirmed before 5 p.m. on a weekday or 1 p.m. on weekends will be delivered the same day.

Pelzman said his patients have reported positive experiences with Alto’s deliveries, and Horowitz, whose patient waited 32 hours for a prescription, said other patients he has prescribed the drug to this week have seen only hours-long waits for delivery,

Denis Nash, a professor at CUNY’s School of Public Health, said there were likely pros and cons to having a single digital pharmacy run the city-funded Paxlovid distribution operation. On the one hand, he said, it can simplify operations for the city.

Yet with a private provider it’s not clear that the drug is being distributed in neighborhoods that may need it most, where vaccination levels are lower and comorbidities more common, he said.

“The good news is that I guess we’re not in a massive surge right now, so there's time to sort this out. But maybe not much,” Nash said. “We need to fix these bottlenecks in the system now rather than later.”

Pelzman questioned why the city did not use a hybrid model that relied on the knowledge that frontline health providers like clinic staff and pharmacists have for their communities.

“They knew who has a doorman and who doesn't, and who can pick it up for the patient,” Pelzman said.

Lanza said the city contracted with Alto “to provide speedy delivery of antiviral treatments late last year when the supply was extremely limited.” He said that the city has released “several communications” to notify providers and residents that the drugs are available at local pharmacies.

Under CDC guidelines, tens of millions of Americans are eligible for the drug, which it says can be prescribed to people over 65 years old, or people over 12 years old who have certain medical conditions.

Yet supplies at the brick-and-mortar pharmacies in New York City have mostly remained flat or gone up, according to a website showing federal data of Paxlovid distribution, suggesting that most local clinics and pharmacies have given out relatively few courses of the drug, as compared with Alto’s 13,000 courses delivered.

A clinic in Brownsville, for example, has had 20 courses of Paxlovid available since late January, with no decline in supply that would indicate it distributed the drug to a patient.

“This is new,” Dr. Fred Pelzman, an associate attending physician at Weill Cornell Internal Medicine Associates on Manhattan’s Upper East Side, said. “It comes with challenges, it comes with unknowns, it comes with hesitancy on the part of doctors and patients.”

On Tuesday, the White House announced a plan to double the number of locations where Paxlovid is available in order to combat slow uptake of the drug, for which supply is “ample,” administration officials said.

Horowitz says he has seen enough. On Thursday, when he learned of the federal website that allows patients and providers to locate brick-and-mortar pharmacies with supplies of Paxlovid, he sent his latest prescription for the drug to a CVS in Park Slope, close to the patient who needed it.

A neighbor would go pick up the drugs for his patient, he said — within an hour of him filing the prescription.

“Live and learn,” Horowitz said. “If a patient’s willing to have someone pick it up for them, why have a delay of six hours, or overnight, or whatever?”