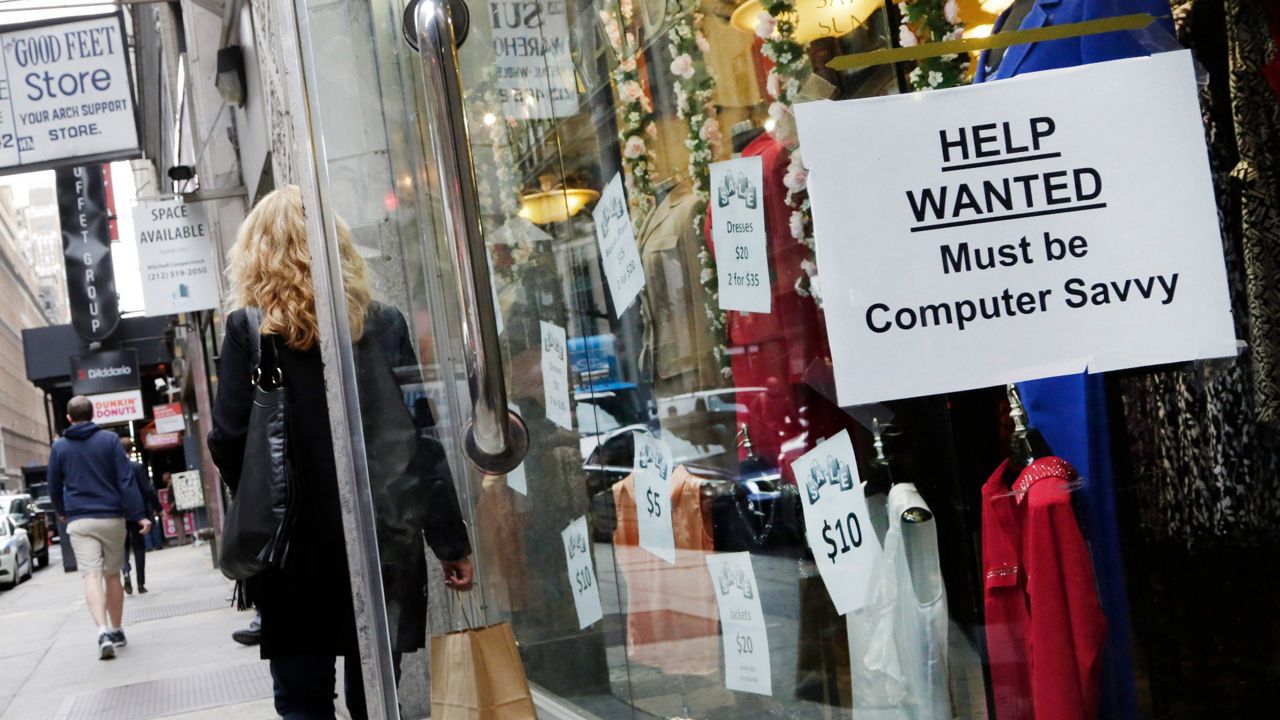 A shopper walks past a store with a "Help Wanted" sign in the window, in New York. (AP Photo/Mark Lennihan, File)

New York City’s salary transparency law will likely be updated after a key council committee on Wednesday approved changes, such as including hourly positions under the rule.

The 5-1 committee vote amending the bill passed in December, known as Local Law 32, would also push back the implementation date from spring to fall.

The full City Council is expected to vote on the changes Thursday.

Earlier this month, a hearing was held in which business leaders and advocates for pay equity sought to sway City Council members to make changes to the bill. One of the proposed changes discussed in the April 5 hearing included exempting businesses with fewer than 15 employees. The current law applies to businesses with four or more employees. The council committee decided to keep that language intact.

“After receiving feedback from the business community regarding concerns that compliance with Local Law 32 may be burdensome for some business owners and lack some clarity on who must comply, Intro-134 was drafted and aimed to clarify what types of positions and job postings we intend to cover,” Councilmember Nantasha Williams, chair of the Committee on Civil and Human Rights and co-sponsor of the salary transparency law, said at the hearing.

The bill would also strengthen language to ensure jobs performed virtually in New York or for New York employers are also covered.

"After listening to concerns from the business community and working in collaboration with the Council and our pay equity partners, we were heartened to settle on a bill that we hope will provide more clarity and help smaller businesses comply without compromising the rights of so many workers who deserve protection under this very important law,” Seher Khawaja, senior attorney for economic empowerment at Legal Momentum, said. The women’s legal defense and education fund supported the bill’s passage in December.

The changes would also prevent job seekers from bringing lawsuits against an employer by relying exclusively on the city’s Commission on Human Rights for enforcement and fines.

Current employees would be permitted to file a lawsuit against their employer for advertising a job, promotion or transfer without posting a minimum and maximum hourly wage or annual salary.

“This strikes a balance between small businesses’ fears that they will be needlessly sued and pay equity advocates’ concerns that current employees be able to seek damages in court as appropriate,” according to the City Council news release.

Business leaders pushing for changes said their top priority was to extend the timeline for employers to adjust to the new disclosure rule, which was approved by the committee, as well as ensuring lawmakers engage with businesses and employers prior to enactment.

“The amendments included in this bill will, on the margins, make compliance with the law less burdensome,” Kathryn Wylde, president and CEO of the business group the Partnership for New York City, a nonprofit serving business interests, said in a statement on Wednesday’s committee vote. “At the same time, it is disappointing that advocates with no responsibility for implementation of legal mandates can call the shots on what does or does not get enacted. We need a more deliberative and consultative legislative process, which current council leadership seems committed to achieving.”

Still, other business groups remain fearful of the bill’s impact on business in the city.

“I would hate to see businesses make a decision to either leave New York and or not relocate here to New York because of these types of burdens,” Randy Peers, president and CEO of the Brooklyn Chamber of Commerce, said.

“Knowing our small business community, they simply cannot pay as much as the larger firms so they’re put at a further disadvantage when it comes to trying to attract talent in Brooklyn and New York City,” he said.

The goal of the bill passed last year was to address the gender and race pay gap, according to advocates for the legislation.

“The law intended to address long-standing gender and race discrimination in compensation, which increases when salary is not disclosed upfront,” according to the council in an April 5 committee report.

Rebecca Greenberg contributed to this article.