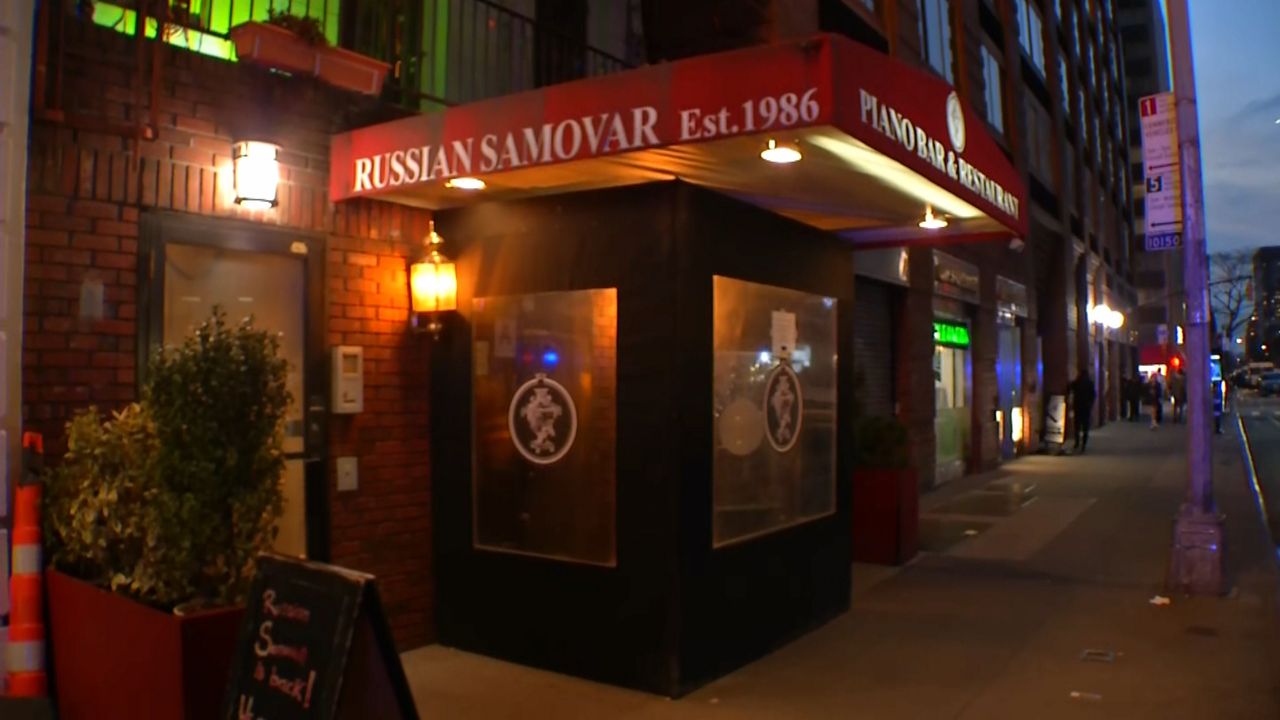 In 24-hours, Russian Samovar restaurant in Midtown lost about 60% of business, faced hate mail, calls and vandalism because of their name. (NY1/Anna Lucente Sterling)

When news of the Russian invasion of Ukraine broke out, Russian Samovar restaurant faced a steep drop in business.

Within 24-hours, they lost about 60% of business, according to co-owner Misha Von Shats. They’ve also faced hate mail, calls and even vandalism — they say all because of their name.

“Contrary to popular belief just because you’re a quote unquote Russian establishment it does not mean you cut a check to Putin or his regime,” Von Shats said. “This is the point you have to cut across unfortunately.”

But the restaurant's roots extend much further than its name would suggest.

The restaurant in Midtown has been family-owned for three generations. It was founded by Misha Von Shats’ grandfather as a safe haven for people defecting from the former Soviet Union, he said.

Von Shats is half Ukrainian and half Russian, and says his staff hails from territories of the former Soviet Union. This includes Ukrainians with family still back home.

“We even have one of our own who’s been with us roughly 8 years he went to Odessa Ukraine three days before the war broke out and now he’s stuck,” Von Shats said.

Still, Von Shats said the Russian connection has meant the establishment has become a target.

“One of our servers got a call three times yesterday calling us nazis and fascists and everything like that so that’s never nice,” he said.

The sign outside the restaurant was kicked down and people have been leaving one-star reviews online saying  things like “stop the war,” according to Von Shats. But customers like Rita and Igor Tsalyuk, originally from Ukraine, came specifically to support the restaurant.

“There are probably a lot of Russian restaurants struggling now but they really dont have anything to do with the government there,” Rita, who lives in Denver, said.

She suggested perhaps it’s time for the restaurant to change its name and remove the word “Russian.” Von Shats said it’s not the first time he’s heard that suggestion, but that changing the name, despite the current challenges, is not an option.

“It was Russian Samovar before there was a Russian federation or Ukraine,” he said. “I keep trying to tell people that just because we have Russian in the name they’re vilifying all of us.”

It’s a message that customers supporting the restaurant also want to spread.

“It’s a war that is horrible,” said Beth Grossman, who was dining with her daughter. “It's something we have to do to support Ukrainians in every way, but targeting Russians in New York is not the way to do it.”