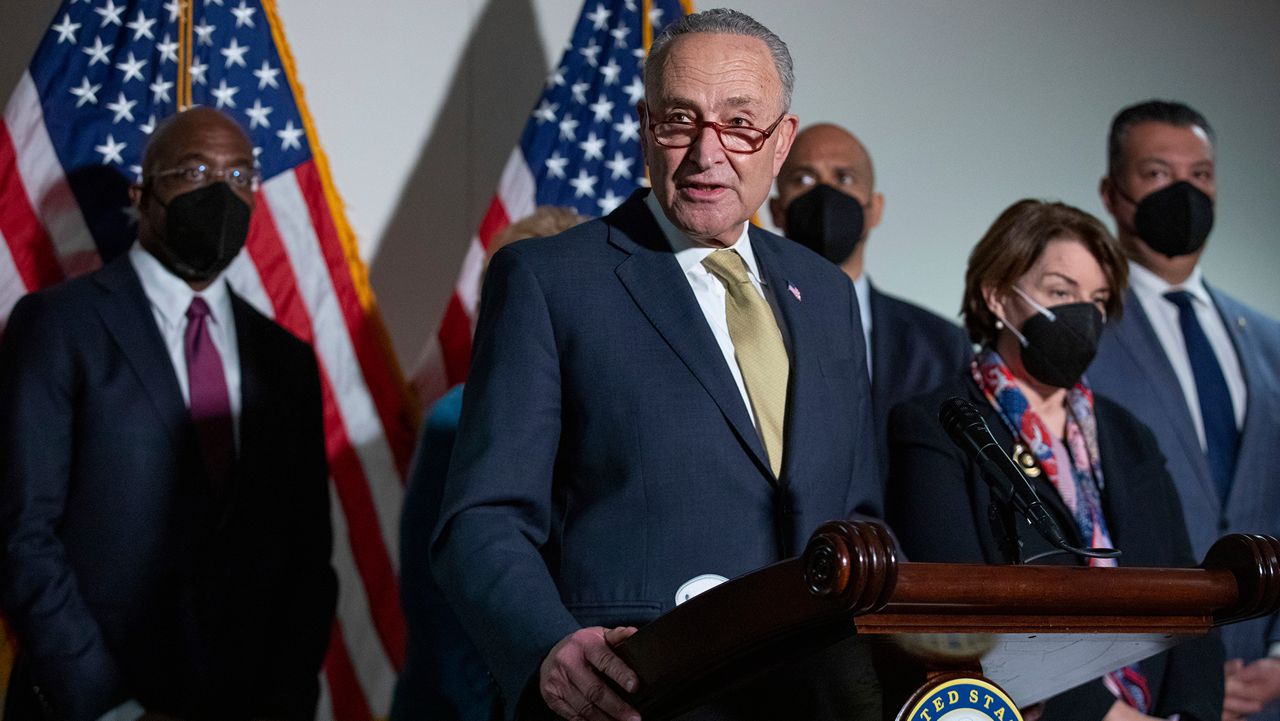 With more than two dozen labor endorsements, more than $30 million campaign cash on hand and no viable challenger in sight, Sen. Chuck Schumer could be cruising to a fifth term, but he doesn’t act like it’s a shoo-in.

“You never take anything for granted. Work hard,” he told NY1 in a one-on-one interview about his re-election bid.

Recent days have found the senior senator in upstate Lockport with autoworkers, in Albany at the NanoTech Center, in Times Square with deliveristas and in the Bronx with fire victims.

“I still think almost every hour of the coffins at the funeral that were brought in,” he said Tuesday at the site of the historically deadly blaze.

In past months, the Senate majority leader has been the face of intraparty conflict that has hampered Build Back Better and voting rights legislation. And at times, Schumer has seen his job approval numbers trend downward.

But his allies and former aides stress that he has consistently delivered for his home state, including federal stimulus dollars for the MTA and the Gateway Program.

“He wants to make sure when there’s a huge hurricane or natural disaster that people get the aid they need,” former top aide Meredith Kelly said, “and during this pandemic, he has been fighting for both shots in the arm but also shots in people’s pockets.”

Schumer told NY1 that he doesn’t often think about his reelection bid.

“I care about this job. I care about New York. And I love doing what I can to help,” he said. “So I don’t think I’d run around anymore this year than any other year.”

Rep. Alexandria Ocasio-Cortez had been floated as a Schumer challenger, but her spokeswoman told NY1 she has filed for reelection and is ruling out seeking his seat.

A source close to Schumer said that his next finance report will show he has $35 million in his campaign coffers.

If he wins this November, Schumer will be 78 years old at the end of his next term.

Asked if he’d retire then, he told NY1, “Let me get reelected and keep working for New York. We’ll see what happens after that.”

Those who know Schumer best return repeatedly to his industriousness as the key to his political career.

“He’s constantly working, so first of all, he’s out talking to people in New York and riding his bike and holding his press conferences,” said Carol Kellermann, a former aide and close friend, “but in between, he’s on his phone, his flip phone.”

Kellermann noted that he knows senators’ phone numbers by heart and is constant contact with his members, their aides, the White House and the president.

Though none have come even close to matching his fundraising, Schumer does have challengers, including Republican candidates Aleksander Mici and Joe Pinion.