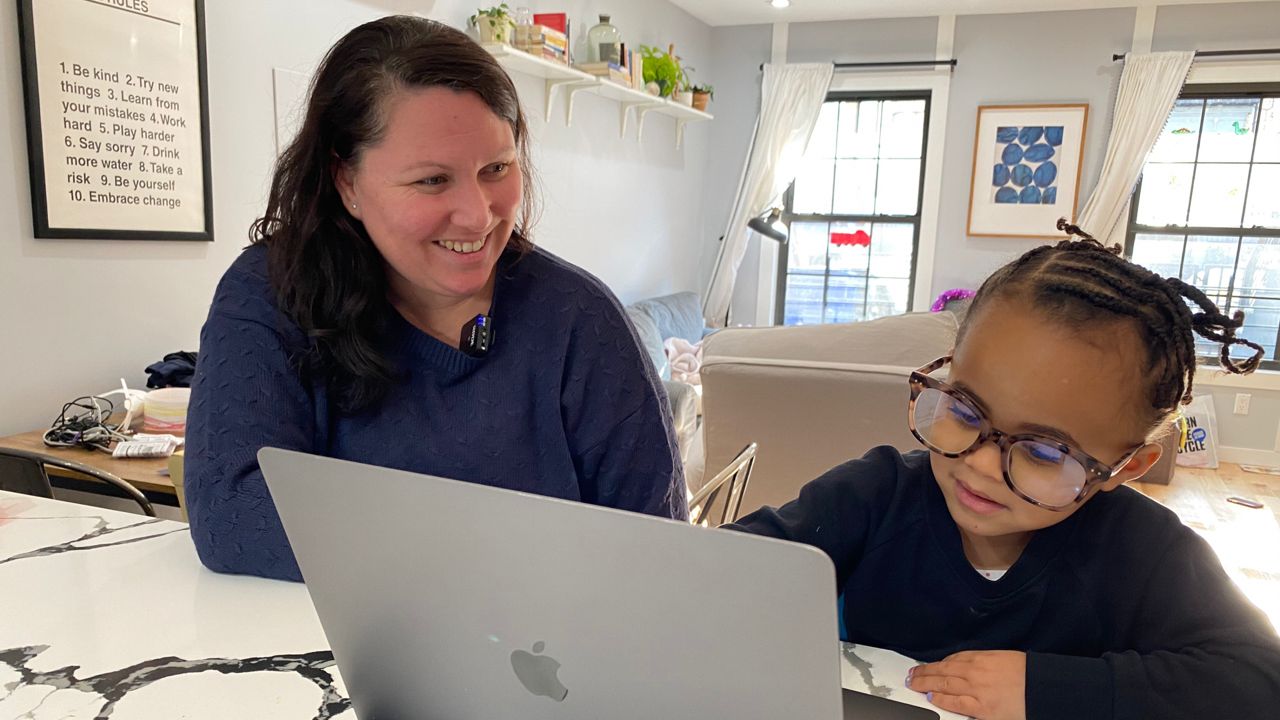 Whitney McMullan and her daughter, Frankie, who is home from 3-K after a classmate tested positive for coronavirus. (Spectrum News NY1/Jillian Jorgensen)

For many pre-K and 3-K students, quarantines have been relentless

Whitney McMullan’s three-year-old daughter, Frankie, attends 3-K in Brooklyn. But she hasn’t been in class much lately.

“She’s now only been in her class for six days since before Christmas,” McMullan said Monday, as she and Frankie sat on the floor of her Bed-Stuy living room.

Students in 3-K and pre-K classes have had to quarantine for 10 days when they’re exposed to COVID at school, with the option of taking a PCR test on day five and returning to class on day eight.

Children in kindergarten or older, meanwhile, don’t have to quarantine at all, as long as they test negative on a rapid test after exposure.

“It’s definitely a pain in the butt,” McMullan began, “because it’s trying to figure out—”

“Pain in the butt?” Frankie asked.

“Yes, it’s a pain in the butt, trying to figure out what the rules are, because we want to be a good citizen and keep everybody healthy,” McMullan continued, “but it’s a little, it’s a little crazy for those kids who are not vaccinated.”

It’s a rule many parents, including McMullan, have been hoping the city might reconsider.

Anna Bershteyn is an assistant professor of population health at New York University’s Grossman School of Medicine, and the parent of two kids in school. One of them is in pre-K.

“I honestly don’t think that the policy makes sense in terms of excluding 3-K and pre K kids from the option of test and stay,” she said.

And unlike teens, those little children can’t learn independently at home.

“It just doesn’t compare to a 3-K or a pre-K student who, not only would really struggle with any kind of meaningful online learning, but also it’s going to completely disrupt the family’s life, because now that person used around-the-clock care and the parents aren’t able to work,” Bershteyn said.

That’s certainly been true for McMullan, a single mom and psychotherapist, who is only paid when she works. It’s not a job she can really do with a curious three-year-old around.

“I had about three or four sessions this morning that I had to reschedule for later in the week when I could get some coverage. Two of them weren’t able to meet this week. So it’s a wash for this week,” McMullan said, as Frankie played with her mom’s computer.

Just then, Frankie opened something she shouldn’t.

On Tuesday evening, the education department notified principals of a change to the quarantine policy, which will give parents like McMullan a little bit of a reprieve.

Starting on Monday, pre-K and 3-K students exposed to coronavirus will be able to return to class on day six, if they test negative on a lab test on day five, or on two rapid tests on days four and five.

“The health and safety of our students and staff is our top priority. Our new quarantine policies are designed to protect our youngest learners who are not yet eligible for the vaccine, keep our early childhood communities safe, and have been updated to ensure that students can return to learning in their classrooms consistent with the latest federal health guidance,” DOE spokeswoman Suzan Sumer said. “We understand the unique challenges our families are facing in this moment, and we’re providing at-home tests for any 3- or 4-year-old who is exposed or experiencing symptoms.”