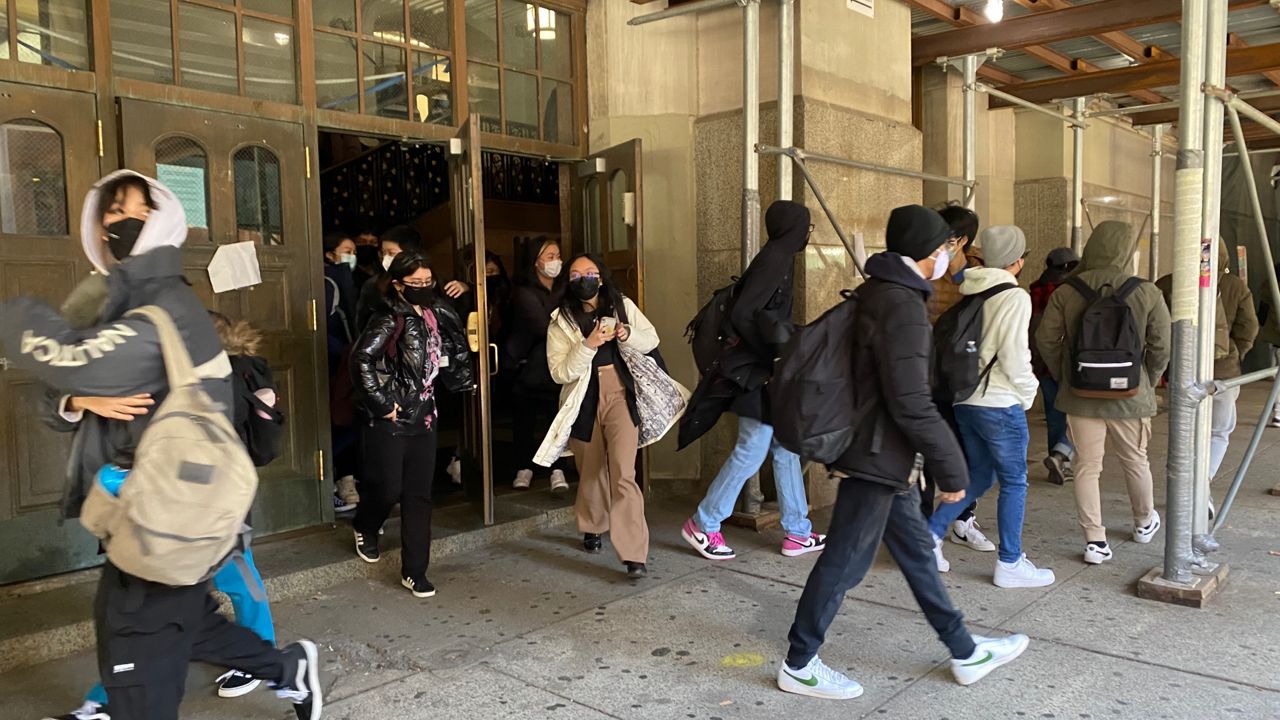 Brooklyn Technical High School students walk out of school just before noon Tuesday, Jan. 11, 2022, over a lack of remote education options as the latest surge of COVID continues to sweep across the city. (Spectrum News NY1/Jillian Jorgensen)

Hundreds of students walk out of class, calling for a remote option

Hundreds of students walked out Brooklyn Technical High School Tuesday — a show of frustration at current coronavirus policies and of support for a remote option at the nation’s largest high school.

Students walked out of the school, which serves 6,000 students from around the five boroughs and is among the city’s most prestigious, at 11:52 a.m., as part of what was planned as a citywide walkout amid a massive surge of omicron cases among students and staff in public schools.

On December 23, the last day of school before winter break began, there had been just 21,828 cases of coronavirus reported to the school system’s Situation Room.

As of today, there have been 116,126, with thousands being reported each day since schools reopened last Monday. That includes more than 14,000 cases reported just yesterday.

There is currently no remote option for students, who are required to attend in person unless they are ill.

Hundreds of kids walked out of Brooklyn Tech today to protest the continuation of in person school during the Omicron wave and to call for a remote option pic.twitter.com/0HMVAFM2YC

Beginning last week, the city has stopped closing classrooms when a student tests positive, instead giving out rapid tests to the child’s classmates, and having them remain in school if they test negative.

“To be honest, I’ve already gotten like four COVID tests. I mean doesn’t that show enough?” student Shuhana Uddin said. “If we’re going to constantly be giving tests out, is there ever going to be an end to this? I just can’t take it anymore.”

Another student named Andrew wore his negative rapid test around his neck like a badge of honor as he left the school Tuesday.

“I got this negative test, you know, dog tags,” he said.

Joyce Li, another student, said many kids don’t even wait to get home before taking the tests.

“Teachers tell us we’re not supposed to take the test at school, but I know a lot of people, they take it in the hallways, they take it in the bathrooms, because they’re scared what if they test positive and bring this virus home to their families and people they care about,” Joyce said.

That fear — coupled with persistent absences from students and staff — make it hard to learn.

“We’re supposed to pretend everything is normal, but it clearly isn’t, and we’re just supposed to pretend that everything is fine, and we should just keep on going with our day, complete our assignments on time, complete our finals, but maybe some kids have COVID, and they can’t take their finals. Our semester ends soon, our school hasn’t been very accommodating about that either,” she said.

Many of the students walking out didn't love their time doing remote learning, but said they think, at this point, a temporary return is necessary.

“We want to go remote for a while just until things slow down, until we can get it under control," Joyce said. "Because right now, it is controlling us."

We understand the concerns of our school communities during this crisis. The best decisions are made when everyone has a seat at the table—I’m inviting student leaders to meet with me so we can work together for safe and open schools.

A Department of Education spokeswoman added the department understands the concerns of school communities, and supports civic engagement among its students.