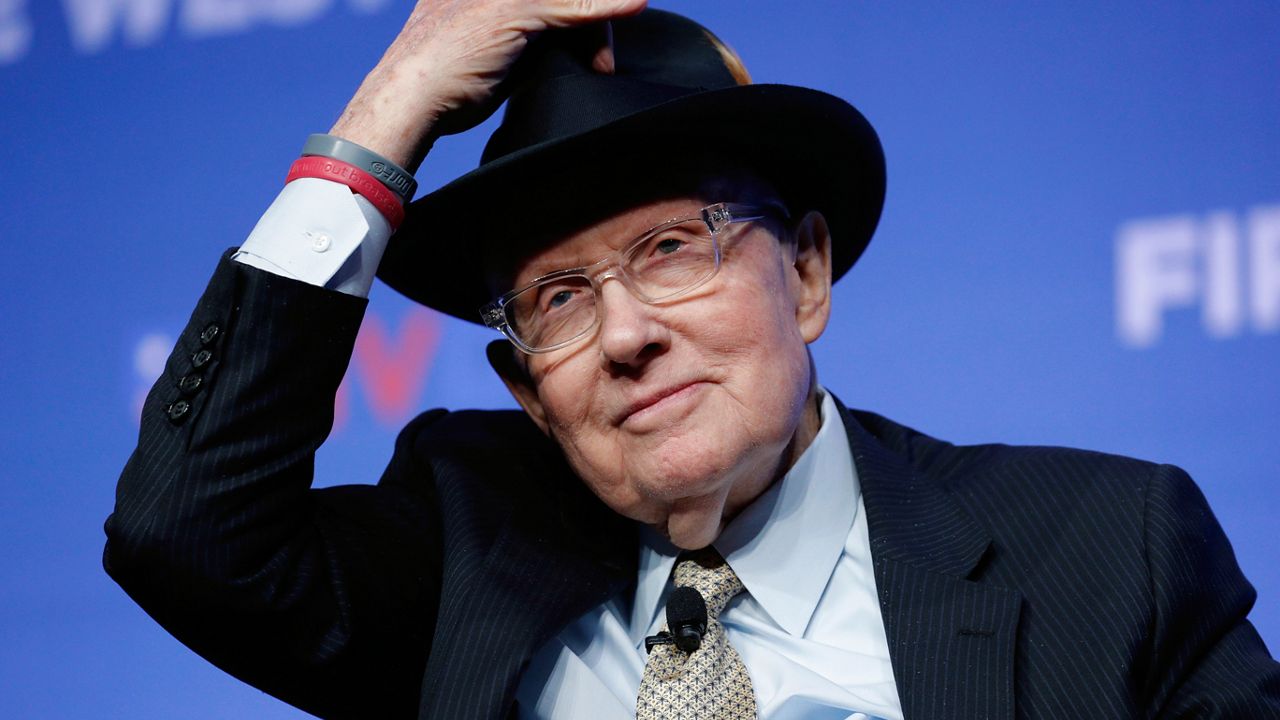 Former Senate Majority Leader Harry Reid, who rose from poverty as a child to become one of the most powerful and influential Congressional leaders of the last two decades, has died at 82.

"Harry Reid was one of the most amazing individuals I've ever met," Schumer wrote. "He was a boxer who came from humble origins, but he never forgot where he came from and used those boxing instincts to fearlessly fight those who were hurting the poor and the middle class."

He’s gone but will walk by the sides of many of us in the Senate every day pic.twitter.com/8T9PiD7vY4

"He was my leader, my mentor and one of my dearest friends," Schumer continued. "He’s gone but he will walk by the sides of many of us in the Senate every single day."

“Harry was a devout family man and deeply loyal friend,” Landra Reid said in a statement. “We greatly appreciate the outpouring of support from so many over these past few years. We are especially grateful for the doctors and nurses that cared for him. Please know that meant the world to him.”

Reid was previously underwent treatment for pancreatic cancer in 2018, but he announced the next year that his cancer was in remission.

He was known as one of the toughest negotiators in Congress, encapsulated by his motto: "I would rather dance than fight, but I know how to fight."

"Harry Reid and I grew up on different sides of the country, but we came from the same place where certain values run deep," President Biden said in a statement. "Loyalty. Faith. Resolve. Service."

"During the two decades we served together in the United States Senate, and the eight years we worked together while I served as Vice President, Harry met the marker for what I’ve always believed is the most important thing by which you can measure a person — their action and their word," Biden continued. "If Harry said he would do something, he did it. If he gave you his word, you could bank on it. That’s how he got things done for the good of the country for decades."

"I’ve had the honor of serving with some of the all-time great Senate Majority Leaders in our history," Biden added. "Harry Reid was one of them. And for Harry, it wasn’t about power for power’s sake. It was about the power to do right for the people."

Reid grew up in the small, impoverished town of Searchlight, Nevada, in a house without hot water, an indoor toilet or a telephone. In 1972, when Reid was 32, his father, a coal miner, died by suicide.

He went on to attend Basic High School, where he played football and boxed – where he met future Nevada governor Mike O'Callaghan, who taught at the school and coached Reid in boxing. Reid went on to attend Southern Utah University and Utah State University, and ultimately put himself through George Washington University Law School by working as a U.S. Capitol Police Officer.

"A son of Searchlight, Nevada, Harry never forgot his humble roots," Biden said of Reid. "A boxer, he never gave up a fight — whether in politics or even against cancer. A great American, Harry looked at the challenges of the world and believed it was within our capacity to do good, to do right, and to do our part of perfecting the Union we all love."

In 1970, O'Callaghan tapped Reid to be his running mate when running for Nevada's highest office. Reid served as the state's lieutenant governor from 1971 to 1974 alongside O'Callaghan until he first sought a seat in the Senate – and lost to Republican Paul Laxalt, the state's former governor.

He served as the Chair of the Nevada Gaming Commission – at one point, while investigating organized crime, he was the taget of a car bomb that police called attempted homicide – before his election to represent Nevada in the House in 1982. Reid would go on to be the Silver State's longest-serving member of Congress.

"Senator Harry Reid was a mentor, father figure, and someone I always looked up to," Nevada's Gov. Steve Sisolak wrote on Twitter. "There will never be another leader like him."

Senator Harry Reid was a mentor, father figure, and someone I always looked up to—There will never be another leader like him.

Kathy and I send our condolences to Landra and the Reid family.

Senator Reid will be deeply missed but the mark he left on our state will last forever. pic.twitter.com/FU08pACpo0

"Senator Reid will be deeply missed but the mark he left on our state will last forever," Sisolak added.

Reid became Majority Leader during the final years of former President George W. Bush's administration, but really made his mark during the presidency of Barack Obama, passing major legislation, including the Affordable Care Act, major Wall Street legislation such as the Dodd-Frank Act, and the stimulus bill that followed the 2007-08 financial crash.

Instead of a statement, Obama shared a letter that he recently wrote to Reid, noting that Landra Reid had asked people for letters she could read to him as he was nearing the end of his life.

“I wouldn’t have been president if it hadn’t been for your encouragement and support," Obama wrote in his letter to Reid, "And I wouldn't have got most of what I got done without your skill and determination."

When Harry Reid was nearing the end, his wife Landra asked some of us to share letters that she could read to him. In lieu of a statement, here’s what I wrote to my friend: pic.twitter.com/o6Ll6rzpAX

"The world is better cause of what you've done," Obama concluded. "Not bad for a skinny, poor kid from Searchlight."

In 2013, he controversially invoked the so-called "nuclear option," which allowed Democrats to pass major presidential nominations, save for Supreme Court picks, with a simple majority rather than the 60-vote filibuster threshold, because Republicans were using the filibuster to block former President Obama's judicial picks en masse.

"You'll regret this, and you may regret this a lot sooner than you think," then-Minority Leader Mitch McConnell threatened at the time – and, sure enough, in 2017, McConnell himself used the "nuclear option" to eliminate the 60-vote threshold for Supreme Court picks, which they used to add Neil Gorsuch to the Supreme Court during the Trump administration.

After Democrats lost control of the Senate in 2014, Reid served as minority leader until his retirement in 2017.

Flags at the U.S. Capitol were lowered to half-staff in Reid's honor, Majority Leader Schumer announced on Tuesday. President Biden on Wednesday ordered that U.S. flags be flown at half-staff on the day of Reid's burial.

Just weeks ago, officials honored Reid by renaming Las Vegas' airport, one of the busiest in the country, to Harry Reid International Airport.

Lawmakers on both sides of the aisle memorialized Reid in a stunning show of bipartisanship.

"Our country has lost an honorable public servant," Vice President Kamala Harris said. "Harry Reid rose through the ranks in Washington, becoming Senate Majority Leader, but he never forgot his humble beginnings in Searchlight, Nevada – and he always fought for working families and the poor. Leader Reid also got things done: from expanding access to healthcare through the Affordable Care Act, to getting economic relief to families and businesses through the Recovery Act, and much more, he made a meaningful difference in people’s lives."

"He was a canny and tough negotiator who was never afraid to make an unpopular decision if it meant getting something done that was right for the country," former President Bill Clinton wrote in a statement. "Because of the legislation he masterfully negotiated to passage, millions of Americans are living better lives."

"I am sad tonight but grateful for the friendship I had with Harry," former Republican House Speaker John Boehner said. "We disagreed on many things, sometimes famously. But we were always honest with each other. In the years after we left public service, that honesty became a bond. Harry was a fighter until the end."

"Senator Harry Reid was a leader of immense courage and ferocious conviction who worked tirelessly to achieve historic progress for the American people," House Speaker Nancy Pelosi, D-Calif., said. "Senator Reid leaves behind an extraordinary legacy of patriotism and leadership that will benefit the Congress and Country for decades to come."

"The nature of Harry’s and my jobs brought us into frequent and sometimes intense conflict over politics and policy," Leader McConnell said. "But I never doubted that Harry was always doing what he earnestly, deeply felt was right for Nevada and our country. He will rightly go down in history as a crucial, pivotal figure in the development and history of his beloved home state."

"Senator Reid carried our state to new heights — nobody has done more in the history of our state to advance Nevada’s interests," Sen. Jacky Rosen, D-Nev., said. "Senator Reid also saw the potential in others and helped them grow to that potential. He was exceptionally kind and had a boundless passion for improving the lives of hardworking families."

"Harry Reid was a champion for Nevada, helping preserve our precious environmental treasures, strengthen our rural communities, and build up our great cities," Sen. Catherine Cortez Masto, D-Nev., said. "And he never hesitated to fight for us, from blocking efforts to dump nuclear waste at Yucca Mountain to getting our state the federal support we deserve."