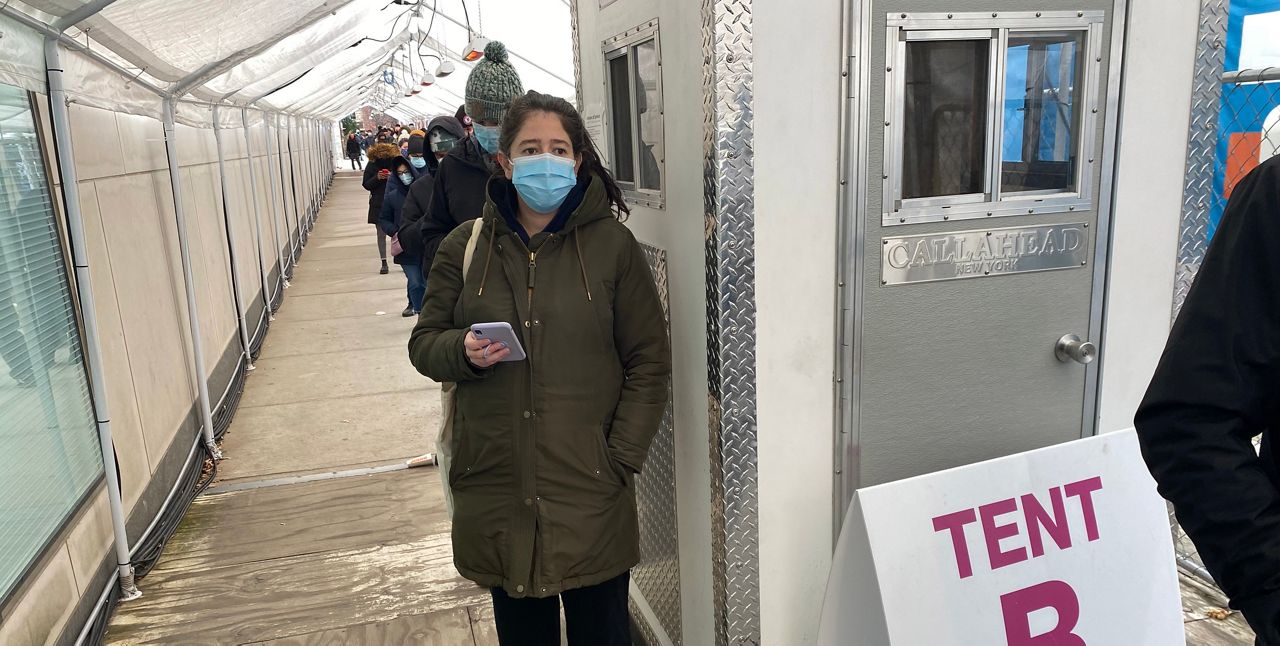 A COVID-19 testing site line in Queens on Tuesday. (Photo by Edric Robinson)

QUEENS, N.Y. — Daniel Klein was just one of a dozen people in a slow moving line Tuesday at a Mount Sinai COVID-19 testing location in Astoria. They hit the lines way before the site even opened for the day.

“I got out and the line was as far as my eyes could see looking down that way,” said Klein.

“Its awful, I got here about an hour and a half ago and it was long then and it’s just horrible,” said Lilli Scheiber, a few spots down the line from Klein.

Long lines have been a city standard at testing locations throughout the boroughs since the number of COVID cases began increasing with the arrival of the omicron variant. It’s an issue that Senator Michael Gianaris and other Queens representatives said needs to be addressed with more testing locations especially in Western Queens.

“I feel like at every state local and governmental level they have dropped the ball on COVID,” said Klein.

People who live in the area say they noticing the long lines soon after the city shutting down mass testing sites and replacing them with mobile vans.

“I think we absolutely need more brick and mortar spots, we need more access to home testing kits there’s no reason why it should cost me 10 or 20 dollars,” Klein added.

Many in line were doing what they could to pass the time, whether that meant reading a book or just catching up on work. Louis Karaiskos  lives in Astoria and admits from his own experience that these longer lines could be a deterrent to testing.

“I’ve been testing myself almost weekly but the line have been so long that I stop doing that for the past two weeks I haven’t gotten tested, Karaiskos said.

“People have to go to work, people have other commitments and especially people who are not having symptoms like I’m only here because I had a few contacts last week I’m a teacher,” revealed Scheiber.

After a long morning of exercising patience, Klein could only describe the entire experience as disappointing.

“It’s ridiculous I mean when I got in there its a half an hour there’s one guy doing in and he’s totally swamped,” said Klein.

Klein and others in the line say they waited about tree hours or more before being seen.