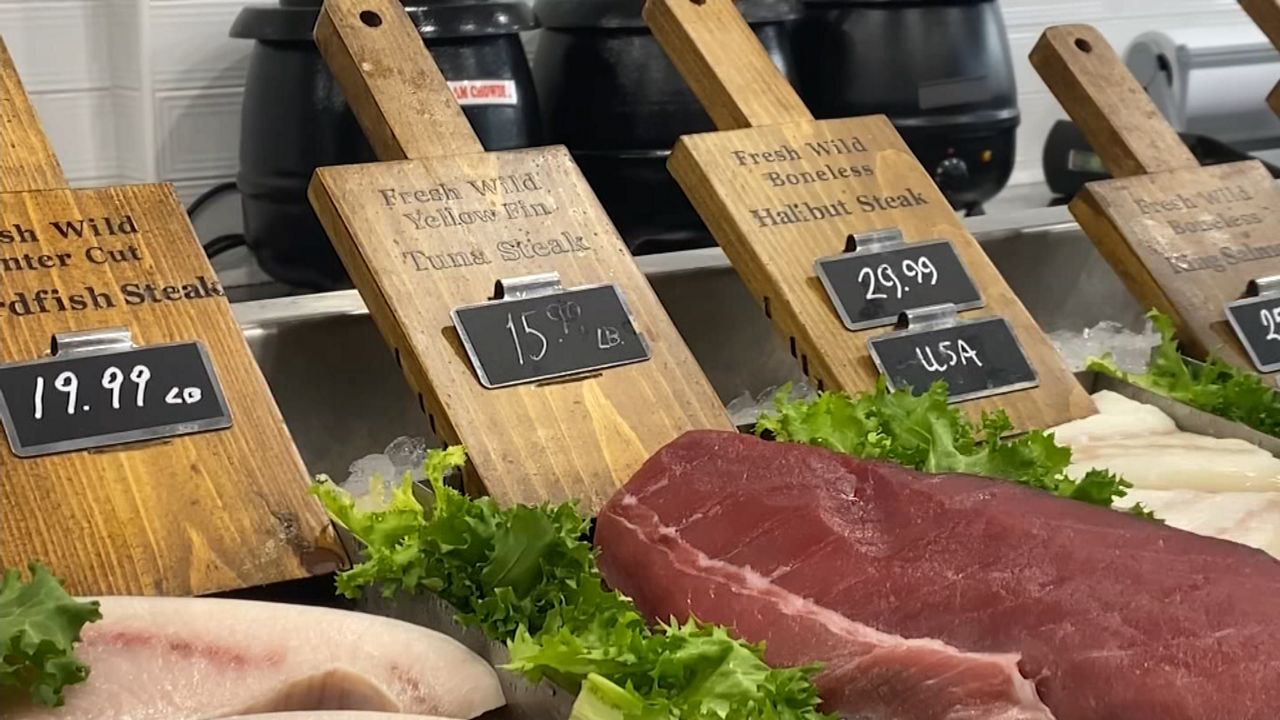 Peter Domazetovski, the owner the the Cove, a fish store on Staten Island, says prices for fish have gone up due to supply chain issues. (Spectrum News NY1)

Father and son Rocco and Jess Spota are planning on having a big Christmas Eve Feast this year.

“I’m gonna stuff the calamari, then we’re gonna get some shrimp and bring over a deep fryer and fry them there. You gotta egg them first then fry them. Everyone loves a good fried shrimp" said Jess Spota. “With everything going on last year with the holidays, we couldn’t really do big holidays. This year we’re making up for it.”

Jess’ father, Rocco, used to make the whole dinner, but this year it's his turn to take on the family tradition.

“For as long as I can remember, Christmas Eve was always the bigger of the two days between Christmas Eve and Christmas Day. I remember growing up both my grandmothers did it,” Jess said. “As my grandmothers got older, my father took it over. Our family is growing, so it’s getting to be a little too much for my dad to do.”

“It makes me so proud for him to pick up the mantle and take on this responsibility, which is no small task at all,” said Rocco.

Peter Domazetovski owns the the Cove, a fish store on Staten Island. He says customers like the Spota’s can expect to shell out a little more this holiday season.

“Even before the pandemic, seafood prices have always been very volatile. If we have a bad storm the boats don’t go out. The pandemic certainly did not help the situation. What really makes pricing more difficult for seafood is that a lot of our products are imported,” said Domazetovski. “Crab specifically, I used to sell Alaskan King Crab Legs for $20 a pound. Current pricing on Alaskan King Crab is double that. We are currently selling for $40, depending on the species.”

The Spota’s say that you can't put a price on an important family tradition.

“What I see price wise is reasonable. Is it higher than last year? Yes. Everyone knows that they have to pay a little more than last year and, if not, your expectations are not realistic," said Jess.

I wasn’t walking out of here saying, "Fish is too high this year, we’re not doing Christmas Eve. We’re doing it, I'm seeing my family. Nothing's gonna stop me,” added Rocco.

Domazetovski says there is good news on the horizon.

“In speaking with a lot of our direct contacts in the industry, they are optimistic that going into the new year that prices will go down,” said Domazetovski.