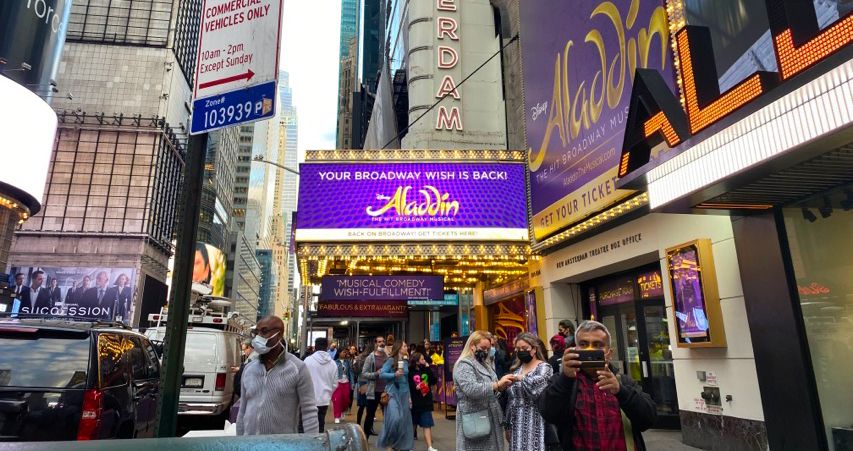 The marquee of the New Amsterdam theater, where "Aladdin" is currently playing on Broadway, appears in New York, Thursday, Sept. 30, 2021. (NY1/Angi Gonzalez)

NEW YORK — Ticket-holders who were in line for Thursday’s showing of "Aladdin the Musical" at the New Amsterdam Theatre were thrilled to learn the show would go on after Wednesday’s show was abruptly called off.

The production said Thursday there were no new positive tests in the last 24 hours after two rounds of testing.


The Disney production originally made its return to the Great White Way on Tuesday after going dark for more than a year amid the coronavirus pandemic. 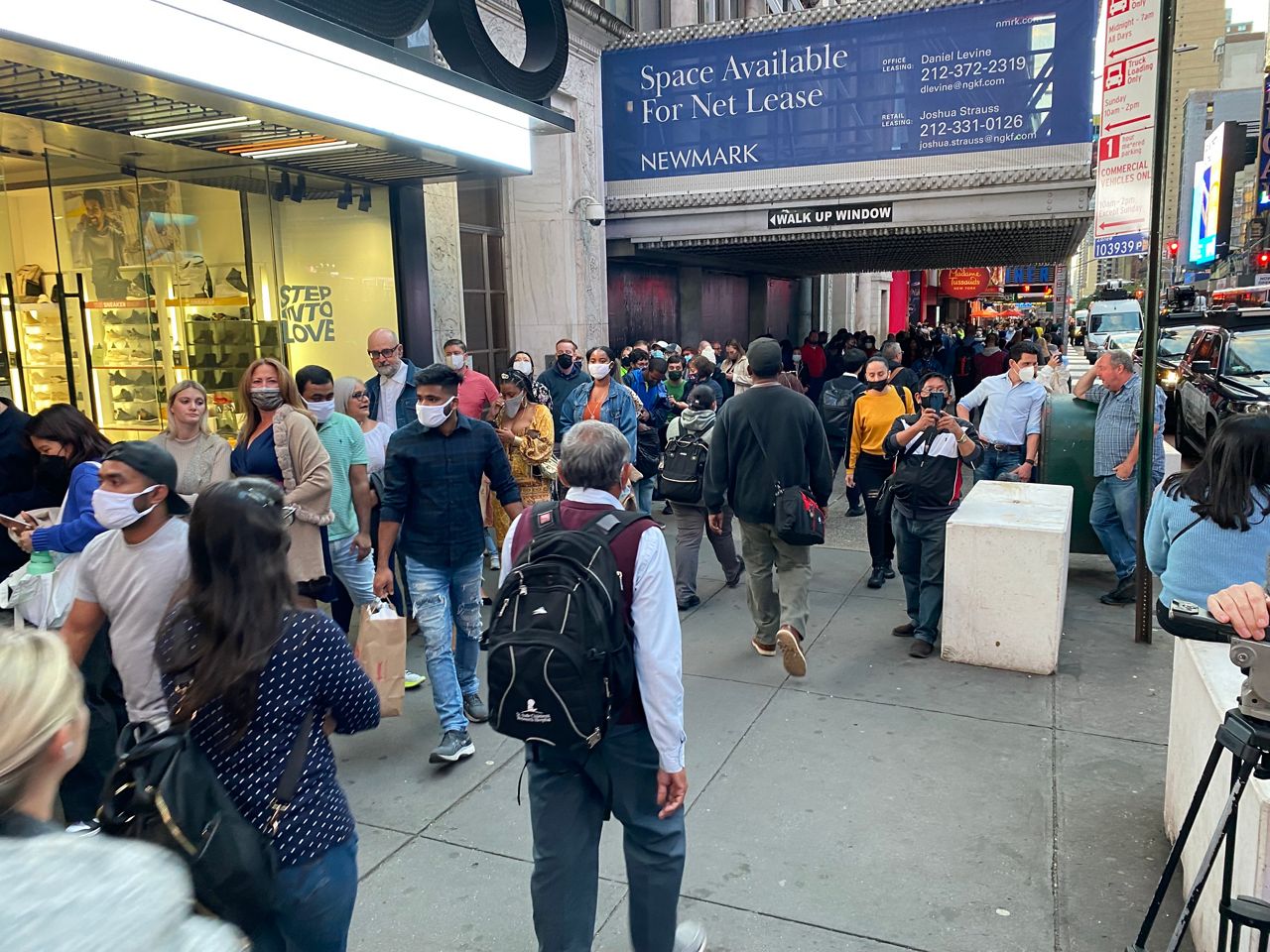 People wait on line outside the New Amsterdam Theatre in Manhattan on Sept. 30, 2021, for the return of "Aladdin" on Broadway after Wednesday's show was canceled due to breakthrough COVID-19 cases. NY1/Angi Gonzalez.

A decision to cancel what would have been "Aladdin’s" second show of the season was made after several breakthrough COVID-19 cases were detected among cast members.

While the show already has a number of replacements who are qualified to fill in, the production team was unable to get all the necessary cast members in place in time to put on Wednesday’s show.

“I was disappointed, but I kept my hopes up, hoping that today it would go on,” said Isabella Giannetta, a tourist from Arizona visiting New York City with her parents.

The Giannetta family was among those who were able to score tickets to Thursday’s show after they showed up for Wednesday’s production to learn it was canceled and their tickets were refunded.

While they hoped that Thursday’s show would go on, there was no guarantee it would happen and they were forced to wait until roughly 3:30 p.m. before a decision was announced.

Meanwhile, the Hassans of New Jersey had tickets for Thursday’s show for more than a year.

“I’m a huge 'Aladdin' fan and she bought the tickets a while ago,” said Wess Hassan of his wife, Laura.

In fact, when the couple learned what happened with Wednesday’s show, Laura Hassan made a number of frantic calls to the theater box office.

“At least 10 [calls] and I checked the website on repeat. I hit refresh, refresh a hundred times,” said Laura Hassan.

Fans weren’t the only ones excited to hear the show would go on. Cast members who spoke with NY1 said they wished for a quick fix and their request was granted.

“It’s nice to know they are taking all the necessary safety precautions to make sure that we can have a safe show tonight,” said Angelo Soriano, an 'Aladdin' cast member. "We’re just happy to be back in the building doing what we love."

Cast members with Disney Theatrical go through a rigorous testing schedule. Every cast member is required to take multiple COVID-19 tests each week, including six PCR tests every 7 days and another 2 antigen tests each week.

It’s a lot of testing, but it is also something people who represent those in the theater industry have come to appreciate.

"The protocols developed with the theatrical unions are designed to test our employees, identify positive cases, and act immediately to contain them. The incident at Aladdin proved that system works. Despite many thousands of test and hundreds of hours of labor each week, some breakthrough transmission is inevitable. However, given the thoroughness of our Covid protocols and an entirely vaccinated workforce and audience, Broadway is proving to be among the safer activities of daily life, both backstage, and for our audiences," Charlotte St. Martin, the president of The Broadway League, said in a statement.

While "Aladdin" may have been the first Broadway production to experience this type of situation, it is unlikely to be the last.

Testing requirements for other Disney Theatrical Productions, such as "Frozen" and "The Lion King," are the same as those for "Aladdin" and designed to ensure that theater-goers, actors and crew members are in a safe environment.