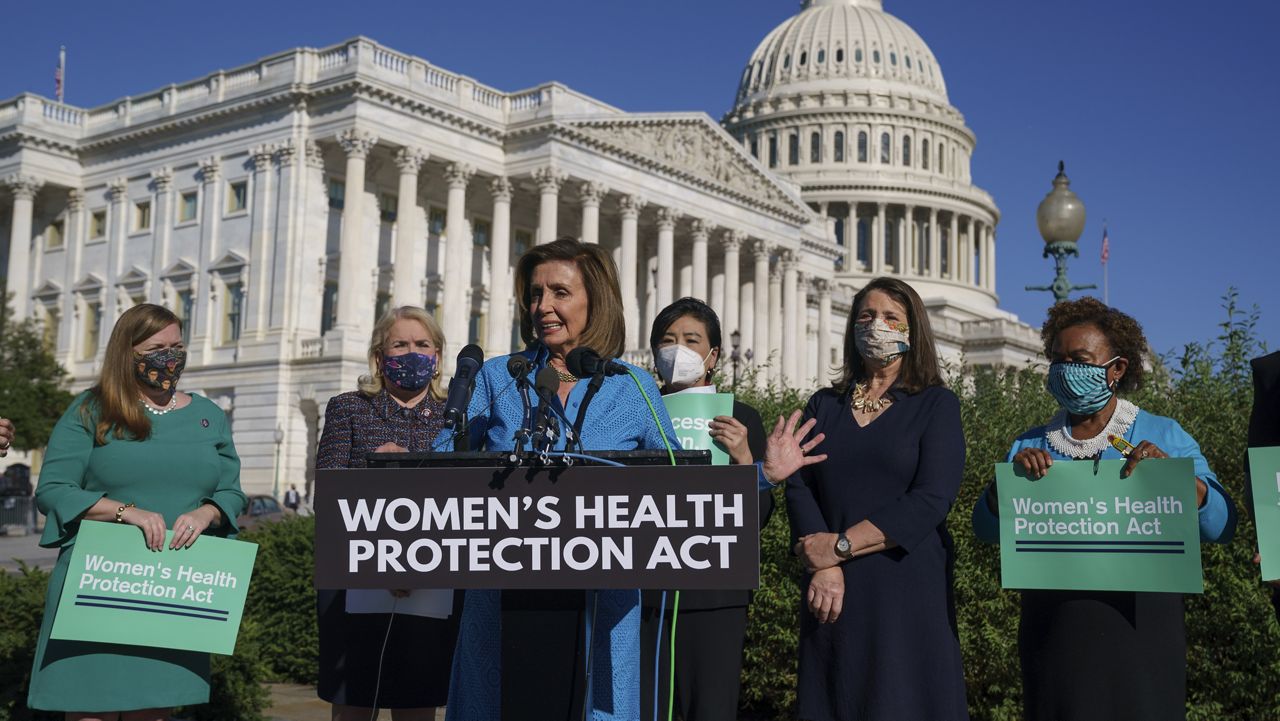 House Speaker Nancy Pelosi, D-Calif., joined from left by Rep. Sylvia Garcia, D-Texas, Rep. Judy Chu, D-Calif., and Rep. Diana DeGette, D-Colo., holds a news conference just before a House vote on legislation aimed at guaranteeing a woman’s right to an abortion, an effort by House Democrats to circumvent a new Texas law that has placed that access under threat, at the Capitol in Washington, Friday, Sept. 24, 2021. (AP Photo/J. Scott Applewhite)

The House of Representatives on Friday passed the Women's Health Protection Act, a bill that would codify protections to abortion rights amid a slew of challenges to the landmark 1973 Supreme Court decision in Roe v. Wade.

The bill passed the House in a 218-211 vote, largely along party lines.

The vote comes as the Supreme Court recently allowed a Texas law that would prevent most abortions to go into effect – which recently inspired a similar bill in Florida filed this week – and the high court is set to hear arguments in a separate bid from Mississippi to overturn the landmark decision in Roe.

"This is about freedom, about freedom of women to have choice, about the size and timing of their families," House Speaker Nancy Pelosi, D-Calif., said at a press conference with House Democrats ahead of the vote, adding that those rights are "not the business of people on the court or members of Congress."

"Congress must protect the rights of women and pregnant people in every zip code, putting an end to an attack on abortion once and for all," Rep. Judy Chu, D-Calif., the lead sponsor of the bill, said. "The Women's Health Protection Act is how we do that. I've introduced the Women's Health Protection Act since 2013 and in every Congress since then because we knew this day would come."

A bizarre confrontation took place after the vote on the steps of the U.S. Capitol. Ahead of a press conference with Democrats following the vote, Republican Rep. Marjorie Taylor Greene of Georgia appeared to shout at some of her Democratic colleagues.

Democrats say the bill would codify Roe, thus guaranteeing the right to an abortion in the face of a slew of state laws which they say restrict a woman's right to choose.

"With a recent slate of extremist state laws that fly directly in the face of legal precedent and protections, 2021 has already become the worst year on record for abortion restrictions," Rep. Chu and Rep. Diana DeGette, D-Colo., wrote in an op-ed for The Hill published Friday. "And then came Texas where a ludicrous scheme of delegating enforcement to private citizens by offering $10,000 bounties to those who report friends, family, and others seeking abortion care. What Texas has done, in the words of the U.S. Department of Justice, created 'an unprecedented scheme that seeks to deny women and providers the ability to challenge S.B. 8 in federal court.'"

"It’s only a matter of time before other states, with Republican legislatures and governors determined to similarly restrict women’s right to access abortion care, follow suit," they wrote. "Make no mistake: these attacks will eventually affect all people seeking an abortion."

Rep. DeGette said that the bill will ensure that all Americans, regardless of race or socioeconomic status, "will have equal access and freedom to get the care that they need."

"Maybe the most important thing this bill will do is it will end our reliance on the courts to protect people for the medical care that they need and deserve," the Colorado Democrat continued.

But Republicans argue that the legislation would prevent states from setting requirements like parental involvement and could weaken laws that allow doctors to refuse to perform an abortion.

Despite passage in the House, the bill is widely expected to fail in the evenly divided Senate, where Republicans are expected to block the bill en masse.

The party has split, in some cases, over how far Washington must go to preserve access to abortions. Liberal lawmakers backed by advocates of reproductive rights who helped power President Joe Biden to office want to expand the number of justices on the Supreme Court to rebalance power, changing the rules if needed to lower the 60-vote threshold typically required in the Senate to advance legislation.

“Democrats can either abolish the filibuster and expand the court, or do nothing as millions of peoples’ bodies, rights, and lives are sacrificed for far-right minority rule,” Rep. Alexandria Ocasio-Cortez, D-N.Y., wrote on Twitter. “This shouldn’t be a difficult decision.”

Republicans promised to overturn Roe v Wade, and they have.

Democrats can either abolish the filibuster and expand the court, or do nothing as millions of peoples’ bodies, rights, and lives are sacrificed for far-right minority rule.

This shouldn’t be a difficult decision. https://t.co/GcEjkxt3gs

But other Democrats — Biden among them — have been wary of such a move.

Biden supports the House bill and called the court’s ruling on Texas an “unprecedented assault on a woman’s constitutional rights.” A statement released by the Office of Management and Budget earlier this week reads that the administration "strongly supports" the bill, specifically blasting the Texas law as one which "blatantly violates existing Supreme Court established under Roe v. Wade nearly half a century ago."

"In the wake of Texas’ unprecedented attack, it has never been more important to codify this constitutional right and to strengthen health care access for all women, regardless of where they live," the statement reads. "The Administration looks forward to working with Congress as the Women’s Health Protection Act advances through the legislative process to ensure that this bill codifies and is consistent with the protections established by Roe and subsequent Supreme Court precedent."

"The constitutional rights of women are essential to the health, safety, and progress of our nation," the statement concludes. "Our daughters and granddaughters deserve the same rights that their mothers and grandmothers fought for and won — and that a clear majority of the American people support. We will not allow this country to go backwards on women’s equality."

The president has directed multiple agencies to conduct a government-wide effort to ensure women have abortion access and to protect health care providers. But he has not endorsed the idea of adding justices to the Supreme Court, instead forming a commission to study it.

The court’s decisions on abortion could prompt political tensions among Republicans, as well.

Former President Donald Trump was able to secure three new conservative Supreme Court justices because Republican leadership in Congress led by GOP leader Mitch McConnell paved the way. Now, as the court upheld the strict new Texas law outlawing most abortions in the state, the political fallout will test the limits of that strategy.

Women and advocates of abortion rights are quickly mobilizing to take on not just those Republicans, but also the big businesses that backed them, aiming squarely at those that contributed to many of the Texas Republicans behind the abortion law.

“They will be met with a fierce response from women and people across the country,” said Sonja Spoo, director of Reproductive Rights Campaigns at UltraViolet, an advocacy organization, in an interview Thursday.

Maine Sen. Susan Collins, a Republican who supports abortion rights, says the Texas law is “harmful and extreme” and she supports codifying Roe.

But she says the House bill goes “way beyond” that, for example by threatening doctors who refuse to perform abortions on religious or moral grounds.

“I support codifying Roe, and I am working with some of my colleagues in the Senate on legislation that would do so,” Collins said in a statement.