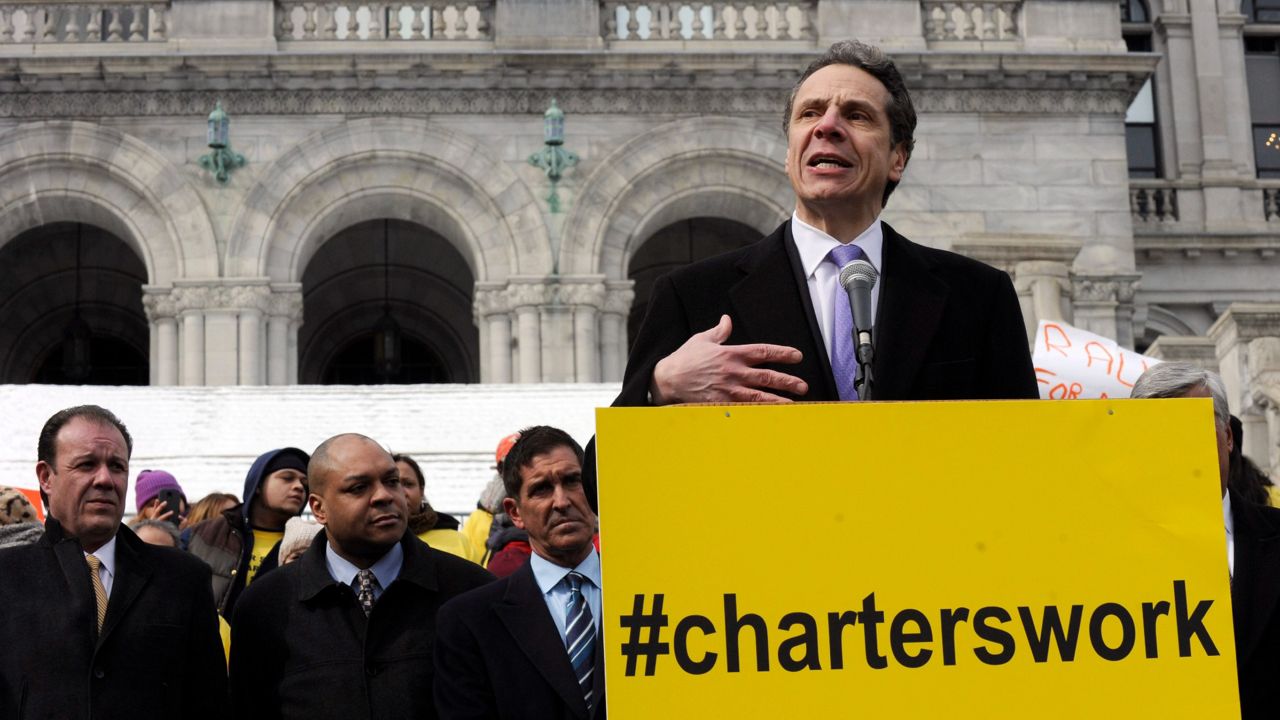 In this March 4, 2014 file photo, New York Gov. Andrew Cuomo speaks at a rally in support of charter schools on the steps of the state Capitol in Albany, N.Y. (AP Photo/Tim Roske, File)

Gov. Andrew Cuomo will leave office this month. When students, teachers and parents return to schools next month, they might not notice much of a difference.

"He walks away with an education legacy that is basically a political legacy,” said David Bloomfield, professor of education leadership, law and policy at Brooklyn College and the CUNY Graduate Center.

The governor's tenure was marked by a promise to reform the state's education system that often meant ugly political fights.

"Education, the great equalizer, and this is the area, my friends, where I think we need to do the most reform, and where I think the reform is going to be difficult,” he said in 2015.

Early in his tenure, he vowed to beef up teacher evaluations, tying them to student performance on standardized tests. He spent years arguing with teachers unions over the details.

He was ultimately successful in requiring the use of the exams in evaluations, only to reverse course shortly after, amid worries about the impact of new Common Core standard-aligned exams.

"And now the winds change, and Cuomo changes along with the winds,” Bloomfield said.

"But he did what he wanted to do through the budget and through statutes,” Bloomfield said.

A prime example: a major and lasting boost to charter schools. In 2014, Cuomo signed legislation requiring New York City to give public space to the schools, or pay their rent elsewhere.

"I think it's very important that they be allowed to continue, that they get the support they need, and that the charter movement itself can grow,” Cuomo said of that legislation in 2014.

"He, in New York City particularly, makes sure that charter schools are given public money for space, that was and continues to be a huge win for the charter schools,” Bloomfield said.

And it was a loss for newly elected Mayo Bill Bill de Blasio, a charter opponent — and perhaps a glimpse at the contentious relationship to come.

More recently, Cuomo often sought to pre-empt the mayor's own announcements on coronavirus-related school closures and openings. But in the end, he left the hard choices about re-opening up to the city.

"When that becomes divisive because the pandemic starts to wind down a bit, he releases the school districts to boil in the hot water themselves,” he said.