President Joe Biden waves as he walks to Marine One on the South Lawn of the White House in Washington, Friday, Aug. 6, 2021, as he heads to Wilmington, Del., for the weekend. (AP Photo/Susan Walsh)

The two tracks to fulfill President Joe Biden’s domestic agenda are now officially moving forward on Capitol Hill, with both likely to get a vote this week.

The two measures follow the strategy proposed by the president himself in June: pass a smaller, bipartisan deal focused on traditional infrastructure priorities and pair it with a larger package full of Democratic objectives — including social programs, or ‘human’ infrastructure — that can pass without Republican support.

“[The president] fully expects, hopes, plans to sign both into law,” White House press secretary said in late June of the administration’s strategy, adding: “He's going to work like hell to get both pieces of this legislation done.”

Senators voted to pass the $1.2 trillion bipartisan Infrastructure and Investment Jobs Act Tuesday in widely bipartisan fashion, with 19 Republicans joining all 50 Democrats in a decisive 69-30 vote.

Shortly after, the Senate began debate on a $3.5 trillion budget measure that includes a number of President Biden’s domestic priorities, including climate, immigration, social programs and health care. The budget framework passed in a 50-49 vote in the early morning hours Wednesday. The budget measure does not need Republican support.

Neither one is likely to reach the president’s desk until next month, but the two pieces of legislation include elements of the sweeping agenda the White House proposed in the spring — the American Jobs Plan and the American Families Plan — which together were estimated to cost more than $4 trillion.

Which of the president’s domestic policy goals are included in the bills, and what could pass with only Democrat support?

Track 1: The bipartisan definition of ‘infrastructure’

The Infrastructure and Investment Jobs Act, which is its official title, includes $550 billion in new spending and focuses on things like roads, bridges, airports, clean water and electric vehicles.

The Senate voted 69-30 to pass the bill on Tuesday, with 19 Republicans supporting the measure.

While the package still includes some of the core tenets of Biden’s American Jobs Plan, many things were scaled down. The U.S. would invest $110 billion in roads, bridges and other projects, for example, compared to more than $150 billion first suggested by the White House.

The biggest cut was to spending on electric vehicles: the infrastructure bill includes $15 billion for EVs and charging infrastructure, instead of the $174 billion proposed in March.

President Biden had also tried to expand the definition of infrastructure to include the home care and caregiving industry, but that was removed during negotiations with senators.

And the final bill also nixed major climate initiatives originally proposed by the White House, a priority for progressive Democrats, including the establishment of a Civilian Climate Corps and an investment in climate research. Those will instead get attention in the Democrats-only bill.

Senate Democrats released Monday the text of the budget resolution that would move forward the bulk of the president’s domestic priorities through a much more expensive package. The budget framework passed early Wednesday, with all 50 Democrats voting in favor of the measure.

The measure is essentially a set of instructions for Congress’ various committees, giving them an outline of issues and spending to plan for and leaving it to them to work out the details. The estimated cost is $3.5 trillion in total, though the actual price tag will be worked out over the next month or two.

“When we took the majority in the Senate earlier this year, the American people entrusted us with a great responsibility: to make their lives better,” Schumer wrote in a letter to senators. “I am happy to report that we are making great progress towards that goal.” 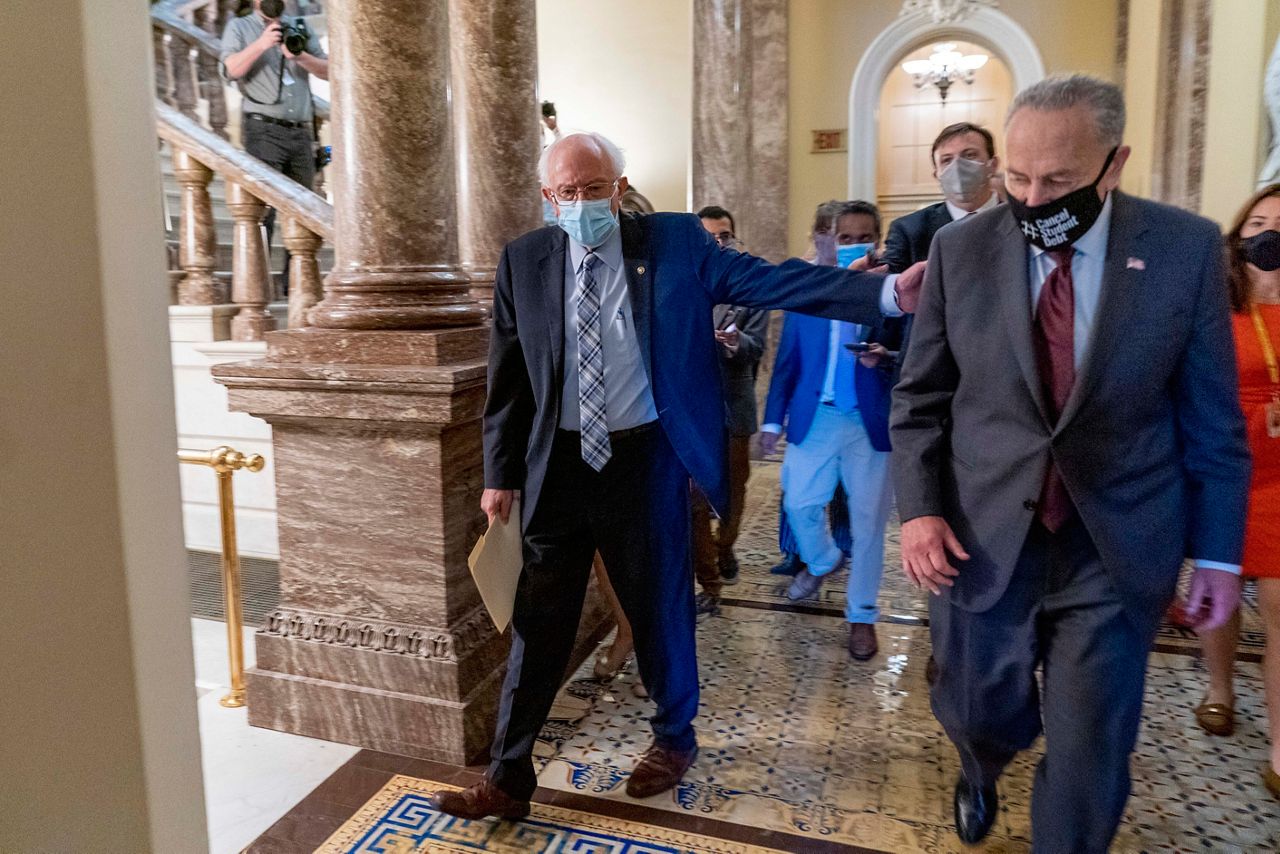 Democrats’ objective is to work out the details and a funding proposal by September 15, setting up for showdown with Republicans next month as the majority tries to pass the budget bill without GOP support. They would do so through budget reconciliation, which bypasses the filibuster and allows approval with just 50 votes.

There are many core elements of President Biden’s agenda included in this larger bill: climate, immigration, social programs and health care.

Climate: The budget outline includes funding for a Civilian Climate Corps, provides incentives for clean energy, creates climate resilience programs and aims to put the U.S. on track to reach a goal of cutting carbon emissions by 50%. Progressives protested outside the White House in June when it was clear climate priorities had dropped out of the bipartisan infrastructure bill.

Immigration: The Judiciary Committee was directed to outline a plan for “lawful permanent status for qualified immigrants,” which is likely to include Dreamers — people brought to the U.S. illegally as children, who are covered by the DACA program — but also potentially farmworkers, essential workers and immigrants living in the U.S. under Temporary Protected Status.

Health care: The Democrats' plan would extend the pandemic expansion of the Affordable Care Act, add dental, vision and hearing benefits to Medicare and invest in the home care industry, among other measures.

What’s next for both bills?

The final outlook for President Biden’s domestic agenda is still weeks or months away.

While the infrastructure package passed handily in the Senate, it still faces an unclear path in the House, where Speaker Nancy Pelosi has promised to wait until the second, Democrat-only package is a reality.

It’s not a bipartisan infrastructure bill OR a bold jobs and families package. It’s BOTH.

If the bipartisan bill isn’t passed with a reconciliation package that has our popular priorities, we’re not voting for it.

The leadership of the House said Tuesday that the chamber will return from Summer recess at the end of August to consider the measure.

And the $3.5 trillion budget reconciliation bill won’t be clearly outlined until at least mid-September or later.

With Republicans totally opposed to that more expensive push on Biden’s priorities, the bill has a rocky road ahead, especially with the fiscal year ending on September 30, which is the deadline for Congress to approve a budget for the next year.