The Thakurs of Chicago started planning their trip to New York in earnest back in May when they found out all four family members could finally be vaccinated.

With their youngest child turning 12 in June, it was the perfect time to start putting a trip on the books, even with the threat of the delta variant on the rise.

“Now that we've been vaccinated, and a lot of the world has been vaccinated, at least in America, we are willing to take a few chances and go out even though there is a new delta variant,” Harsh Thakur, the father of the family, said. “That's causing a lot of concern, but I think if you're completely vaccinated, I think it's OK.” 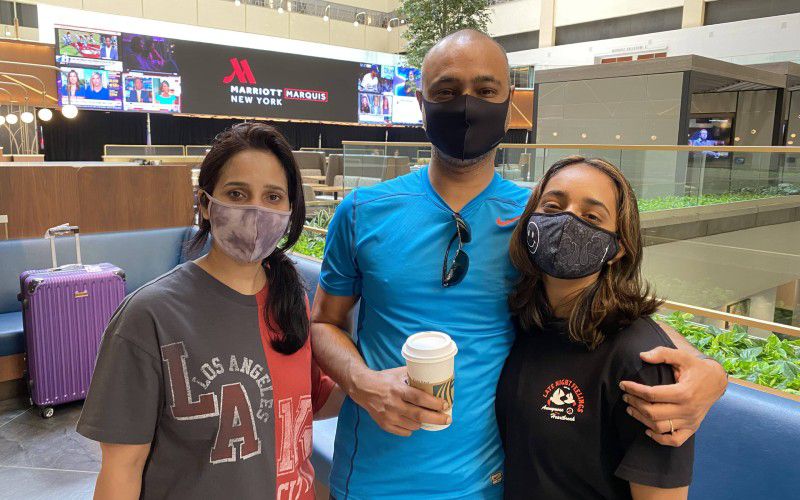 Suman, Harsh and Khushi Thakur in the lobby of the Marriott Marquis on the second day of their NYC trip. (Photo: Anna Lucente Sterling/NY1)

It’s the type of thinking that the city is banking on as it moves full steam ahead in its reopening plan.

But despite the huge efforts the city has been making to lure tourists back to NYC, including a massive ad campaign worth $30 million, it’s still not shaping up to be what Mayor Bill de Blasio is calling the “Summer of NYC.”

About 41% of the city’s hotels are still closed, according to the Hotel Association of New York City. And at the hotels that are open, amenities such as on-site restaurants and lounges are not fully operational.

The Thakur family chose the Marriott Marquis in Times Square for their stay, but the hotel is not the bustling attraction it once was.

The lobby “used to be impressive,” said a hotel staffer, who requested anonymity to  speak freely about her employer. “On the weekends, you’d get a line down to the elevator.”

The Marriott did not respond to a request for comment.

The glass elevators of the hotel are normally an attraction, allowing visitors to glimpse other floors. There is now little activity to be seen traveling up and down the atrium.

One of the biggest contributing factors to the current state of tourism in the city is that most international borders remain closed, including neighboring Canada.

“Canadians are a big part of our business,” said Vijay Dandapani, president and CEO of the Hotel Association of New York City. “Ditto for the United Kingdom — U.K. citizens were the highest paying customers in the hotel industry, followed by China.”

International tourists spend four times as much as domestic visitors when they come to the city, according to the state.

That means big losses for not only the hotel industry, but for tour guide companies as well.

Tourism is one of the city’s largest sources of revenue, reaching a record high of 66.6 million visitors and generating $47.4 billion in spending in 2019.

But over the course of the pandemic, the number of visitors dropped by 67% and spending declined by 73% in 2020, according to the state comptroller.

That’s why reviving the industry has been a priority for the mayor, who has announced a number of initiatives, such as the upcoming ‘Homecoming week’ with concerts across the five boroughs, including a massive one in Central Park, and vaccination sites at Grand Central Terminal, Times Square and a pilot program at airports back in May, all aimed at travelers coming to the city.

Over the past several months, tourism has improved. Hotel occupancy rates are up from 24% in January to over 50% in June, according to STR, a lodging data firm. And weekends have seen even better numbers with an increase from April to June by 16%.

But the city’s comeback is complicated by the ongoing pandemic, including the rising delta variant threat.

In the city, the highly transmissible variant is the most dominant COVID-19 strain, soaring from about a quarter of tested positive samples to 75% in just a few weeks, according to the city’s health department. 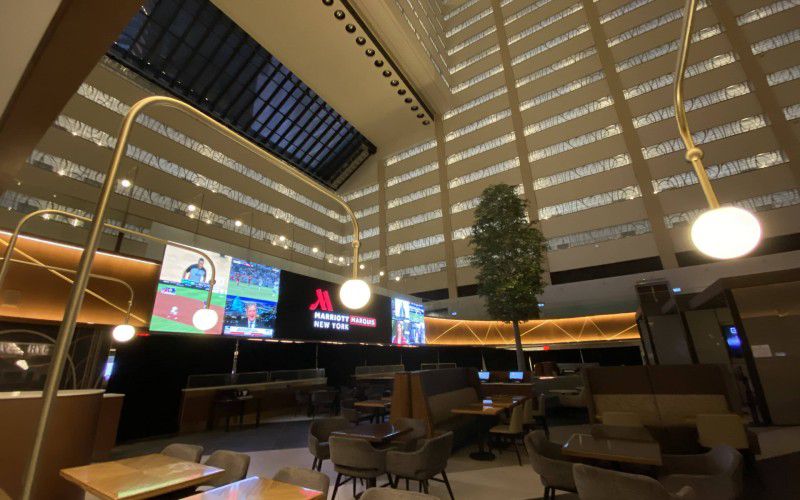 Empty restaurants and lounges like this one at the Marriott Marquis in Times Square are a common sight across the city’s hotels. (Photo: Anna Lucente Sterling/NY1)

The slow return of office workers has also put a big strain on the industry, including New York Cruise Lines whose business relies on corporate events.

“When people aren't in the offices themselves, then the offices are not throwing happy hours or throwing a summer party for their employees,” Kanarick said.

The rise in shootings in the city — an increase of 18.8% compared to the same time last year, according to the NYPD — including two high-profile cases in Times Square, has some tourists worried about safety.

“We all know about the shootings, we all know about the assaults on people,” Dandapani said. “That has to come down because perception is everything. If you think about it in absolute numbers, it's not a big deal, but every shooting is a front page headline, so to speak. That's the negative.”

It’s a conversation people working in the industry have been having with customers as of late.

“One lady asked me, ‘Do you think we're gonna be safe?’” said the Marquis Marriott staff member. “And I just told her, ‘Listen, I need you to know that people in New York usually walk around each other. If some people are upset, then maybe stand aside.'”

The Thakur family did not factor crime into their decision to visit the city, but said they kept safety in the back of their minds during their stay, including one late-night quest for ice cream.

“We didn't want to go too far into places we didn't know because it was really late at night, but we weren't overly worried about crime,” Khushi Thakur, Harsh’s daughter, said.

For now, the industry has been relying on local and regional travelers for the bulk of its business.

Foot traffic in Times Square reached above 200,000 over the past week, which is 30% more than the weekly average two months ago, Harris said.

Though the city is still in recovery mode and facing complications along the way, visitors say they still feel satisfied with their NYC experience.

“It doesn't feel like we're in a pandemic, as much as I'm sure it did when lockdown first started,” Khushi Thakur said. “You can still feel the energy and the buzz of the city.”