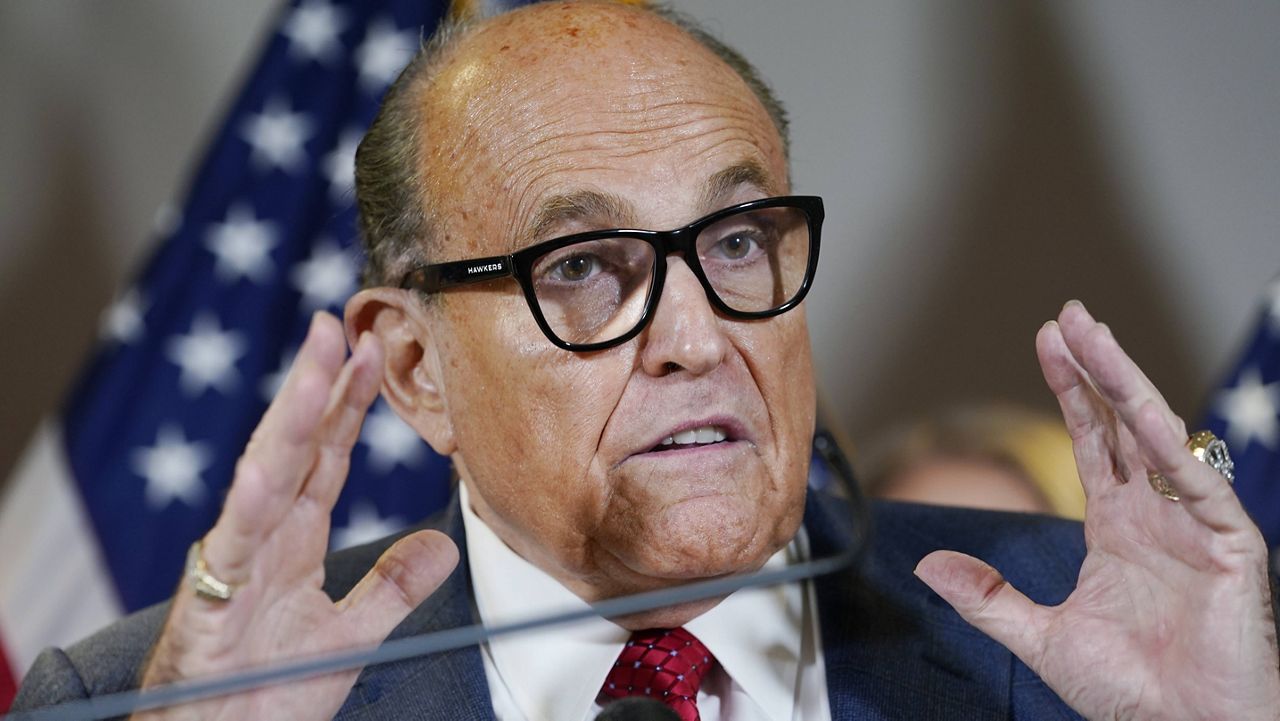 The state’s bar association first said in January that it would consider pushing for Giuliani to be disbarred after his statements helped fuel the violent mob that invaded the U.S. Capitol on Jan. 6 with the aim of overturning the presidential election.

Giuliani called for a “trial by combat” that day, drawing rebuke from prominent lawyers who filed complaints with the state Supreme Court's Attorney Grievance Committee, who accused Giuliani of playing a “role in fomenting a violent insurrectionist attack” on the Capitol.

Giuliani told Newsmax later Thursday night that he deserved a hearing and was being punished for representing Trump.

“We do not live in a free state,” he said in the interview. "We live in a state that’s controlled by the Democrat Party: Cuomo, de Blasio and the Democrats. We have a double standard. There’s no doubt if I was representing Hillary Clinton, I’d be their hero."

"We are disappointed with the Appellate Division, First Department’s decision suspending Mayor Giuliani prior to being afforded a hearing on the issues that are alleged," John Leventhal and Barry Kamins said in a statement. "This is unprecedented as we believe that our client does not pose a present danger to the public interest. We believe that once the issues are fully explored at a hearing Mr. Giuliani will be reinstated as a valued member of the legal profession that he has served so well in his many capacities for so many years."

"Can you believe that New York wants to strip Rudy Giuliani, a great American Patriot, of his law license because he has been fighting what has already been proven to be a Fraudulent Election? The greatest Mayor in the history of New York City, the Eliot Ness of his generation, one of the greatest crime fighters our Country has ever known, and this is what the Radical Left does to him," Trump said in a statement. "All of New York is out of control, crime is at an all-time high-it's nothing but a Witch Hunt, and they should be ashamed of themselves. TAKE BACK AMERICA!"

“We’re officers of the court and we’re prohibited from engaging in conduct involving dishonesty, fraud and deceit and misrepresentation,” Hoylman said. “There can’t be any room in the legal profession for those who seek to undermine or undo the rule of law.”

The panel of judges wrote in its decision that “there is uncontroverted evidence that respondent communicated demonstrably false and misleading statements to courts, lawmakers and the public at large” in defending Trump’s false claim that he won the 2020 election.

The panel cited state rules of conduct for attorneys that bar lying to tribunals of judges and require that lawyers not “engage in conduct involving dishonesty, fraud, deceit or misrepresentation.”

The decision rejected Giuliani’s arguments that his statements were protected by constitutional guarantees of free speech, and his suggestion that he did not know his statements about the election were false when he made them.

The judges singled out Giuliani at first claiming, then not claiming, that there was election fraud in public appearances before other courts.

“Respondent argues that there was no misconduct because he truthfully told the court that day that there were no fraud claims,” the judges wrote. “This defense rings hollow.”

A half-hour before the ruling, Giuliani tweeted about the attack on the Capitol, questioning the investigation into the death of Ashli Babbitt, a Trump supporter who was killed in the Capitol.

On Jan. 6, 2021, I believe only one shot was fired, or was it multiple shots from one source? The person shot, Ashli Babbitt, was unarmed and being lifted up by two unidentified men. Why are those critical identities being covered up?

Are we living in Communist China?
Will the panel for the NY Bar Association be held accountable for abuse of power? https://t.co/adzoJQSSjb

Giuliani has denied wrongdoing, and has remained a fixture of conservative media. He made an appearance Tuesday evening at the victory party for Curtis Sliwa, the projected Republican nominee in this year’s mayoral race.

Giuliani has 20 days to request a hearing on the suspension.