Omid shakes the hand of an American soldier he served with in Afghanistan, while working as an interpreter in 2020. (Photo courtesy of Omid)

Omid stopped working as an interpreter for the U.S. military last year, but he says the Taliban still search for him. For safety, he rarely leaves the house after dark, if at all.

“After the sunset, it’s difficult for all interpreters to go outside,” he said, going by his first name for this story since he fears his life — and his family’s lives — are at risk.

Taliban members recently stopped his dad on the street to ask: “Where’s your son?”

“If the Americans withdraw from Afghanistan even for a minute, I cannot guarantee I can be alive,” Omid added.

As the U.S. prepares to exit the country, the military could leave behind thousands of interpreters like Omid, plus others who aided the United States, even as they remain threatened because they’re seen as traitors for their work.

Now, dozens of advocacy organizations and U.S. lawmakers on both sides of the aisle are calling for the Biden administration to evacuate all interpreters and their families out of the country before it’s too late, ideally to a U.S. territory like Guam.

As soon as the American presence disappears from Afghanistan, interpreters fear the worst. 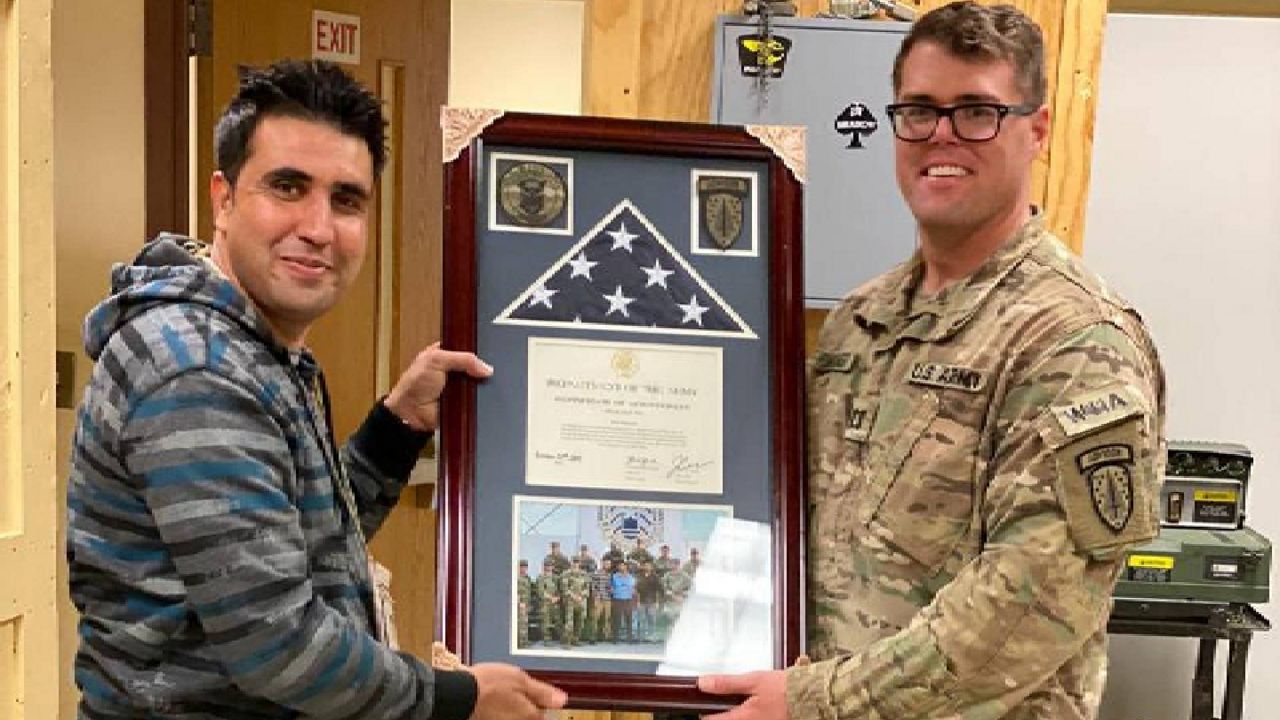 To help, Congress approved a visa program in 2009 for interpreters, cultural advisers and other Afghan allies, and they’ve allocated thousands of Special Immigrant Visas (SIVs) over the years, promising to bring them safely to the U.S.

But the program has been plagued with slow processing and a growing backlog. The application process still takes an average of three years, per the State Department’s latest report, despite a congressionally-mandated deadline of nine months. The administration still has nearly 11,000 unused SIVs out of 26,500 approved by Congress.

Support for interpreters and the calls for their evacuation are bipartisan, most recently demonstrated Friday in a letter to President Joe Biden from House lawmakers, many of them veterans, urging speedy protection for Afghan allies. The letter was first reported by POLITICO.

Signatures included that of Rep. Michael Waltz, R-Fla., who served in Afghanistan with the U.S. Special Forces and has long stressed the critical nature of interpreters.

“We have a moral obligation to get them out,” he told Spectrum News. “It also sends a message around the world to our other local allies — in Africa, the Middle East and elsewhere — about whether the United States is going to stand with you.”

Waltz is one of many calling for an immediate relocation of interpreters and their families, an air mission that would take them to a U.S. territory like Guam or a third country to finish processing their visas.

“I think it needs to happen now,” he said. “It needs to happen while we still have the U.S. military there to protect these people and while we have, frankly, an airfield there where it’s safe for our transport planes to land.”

On Friday, more than 70 advocacy organizations, including groups like Veterans for American Ideals, RAICES and Refugees International, sent another letter to the president urging an evacuation, noting historic examples like the 1975 airlift of thousands of Vietnamese people after the Fall of Saigon and the 1996 evacuation of Iraqis to Guam.

In the meantime, Secretary of State Antony Blinken told members of the House Foreign Affairs Committe Monday that the department is considering "every possible contigency," though he did not acknowledge the idea of an evacuation.

"We have surged staff," the secretary said, explaining that the department plans to add 50 more people in D.C. by the end of July. "We expect to be able to clear the backlog over the next few months at the pace of about 1,000 a month."

Members of Congress, veterans and advocates fear that processing all 18,000 applicants and their families could in reality take years.

The Pentagon is prepared for an evacuation if it becomes necessary, Chairman Mark Milley of the Joint Chiefs of Staff confirmed to reporters in late May, as first reported by Defense One.

“There are plans being developed very, very rapidly here — not just interpreters but a lot of other people that have worked with the United States,” the chairman said.

Army Col. David Butler, a spokesperson for General Milley, confirmed to Spectrum News that an airlift is part of the military’s “planning effort” but “not necessarily the primary option.”

Omid applied for a visa last year, but he was denied, even with letters of support from American soldiers he worked with. He explained that it’s because he was fired from his job after failing a routine polygraph test. He’s submitted an appeal this year.

A State Department spokesperson declined to comment on Omid's specific case since "visa records are confidential under U.S. law."

But those details don’t matter to the Taliban.

“They call all the interpreters ‘American spy,’” he said.

His home district, which sits outside Kabul, is already under Taliban control, and recent reports indicate that control, as well as violence, is spreading across Afghanistan as the U.S. prepares its exit.

That leaves thousands of interpreters, including Omid, to wait.

“I swear [to] God, I don't care about myself,” he said. “It’s my concern to lose my beloved ones, especially my mom, my dad, and maybe my brother.”