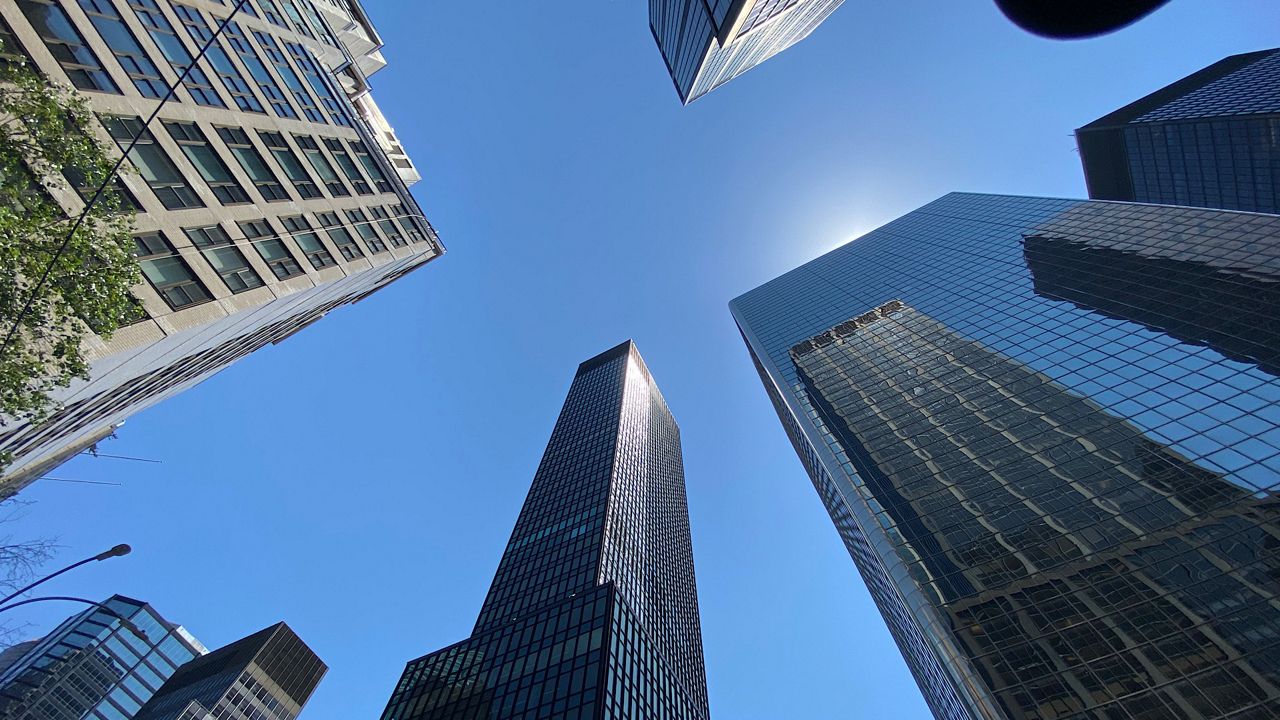 How environmentally friendly is that building? Check the letter grade.

You may have noticed that letters are not just for grading restaurant cleanliness in the city anymore.

Letter grades are now telling you how environmentally clean buildings bigger than 25,000 square feet are.

It’s because of a law passed three years ago, and in three more years the owners of the buildings impacted will face big fines if they don’t meet new carbon emissions standards.

In 2019, right after City Council passed the carbon cap law for buildings the Durst Organization decided to completely upgrade its office building on 3rd Ave. at 51st St.

"The building is undergoing $150 million renovation and every component of that work has been selected in order to provide a more sustainable, healthy environment," said Ashlea Aaron, the senior managing director of commercial leasing at the Durst Organization.

They’re converting a standard heating and cooling system from around 1969 to a more efficient one, providing heat from the floors and cooling from above, and with all new windows, less cooling will be needed.

“You can even feel that the glass is cool because the radiant heat never gets in the space,” said Brian Klansky of View Inc.

The glass his company makes tints on its own depending on the weather, blocking up to 99% of the light and stopping up to five times more heat from getting in the building than regular glass. Overall, the improvements will provide a 44% reduction in energy use for the building.

“Some of the most efficient buildings in the city aren't able to meet the cap that's been imposed through the law,” said Alex Shapanka, an assistant vice president at the Real Estate Board of New York or REBNY.

REBNY, an industry lobbying and membership organization, supports the goal of decarbonization, but believes the law is flawed because the cap doesn't give enough consideration to different occupancy types. Older residential buildings will also face steep upgrade costs that could be passed along to unit owners and renters.

"Going green saves us green, so there is a return for the property owners," said Melanie La Rocca, commissioner of the New York City Department of Buildings.

She says there are government incentives for the upgrades and it has working groups and advisory boards designed to address unique occupancy types.

The Durst building in Midtown East doesn’t have a letter grade yet and the owners won’t know its carbon footprint until it’s occupied. Leasing experts are now working to make that happen.

“Anything you’ve seen in a science fiction movie is now here,“ said Klansky describing his company's next generation technology in its windows.

They put TVs in windows that serve as touch screens.

"You can do a Zoom call.  You can do a Microsoft call. You can do anything right in the window,” he said, providing Durst with an additional selling point to lure in tenants.