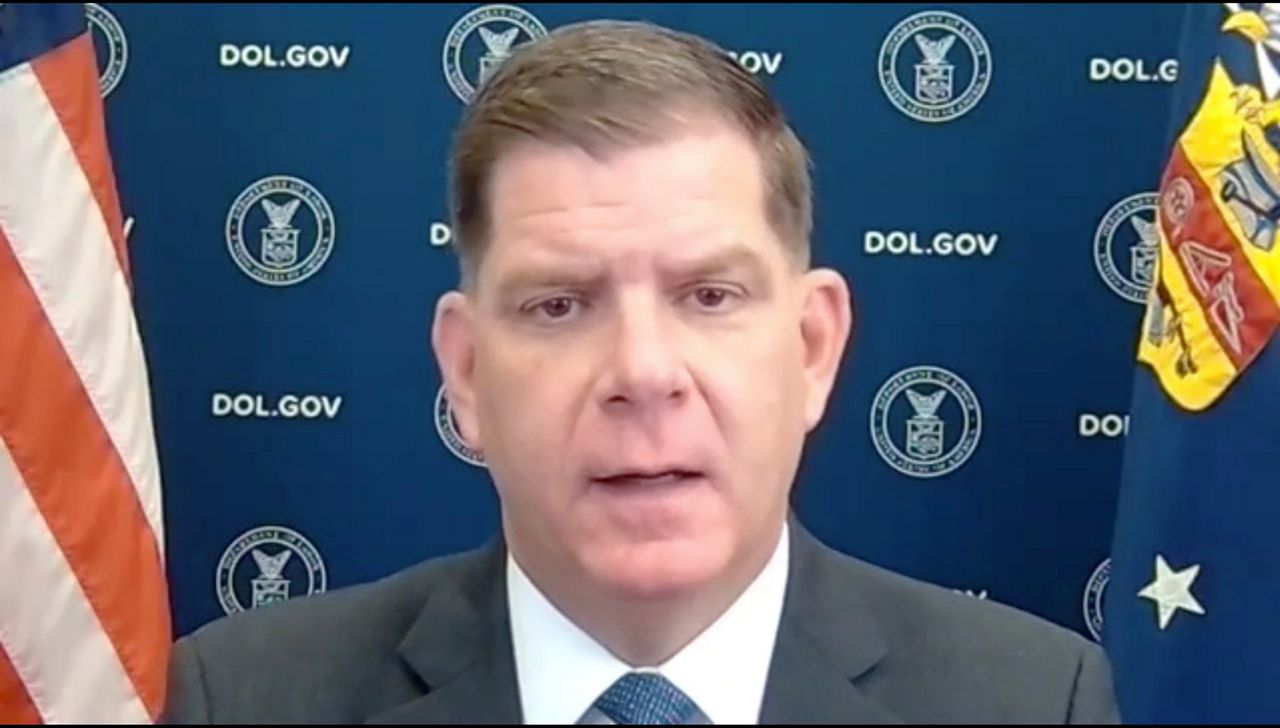 The United States has a “steep hill to climb” as it attempts to revive its economy in the aftermath of the COVID-19 pandemic, Labor Secretary Marty Walsh told Spectrum News on Friday, acknowledging that any progress made by the Biden administration would likely be incremental, but not insignificant.

“Last March, 30 million Americans were out of work, almost overnight,” Walsh told Spectrum News’s Samantha-Jo Roth. “And lots of businesses had to either shut the doors or come up with different business models. And as we come out of this pandemic, as we start to recover, we have to start thinking: how do we get people back into the workplace?”

Walsh’s comments came just hours after the release of April’s monthly jobs report, which showed that the U.S. economy added just 266,000 new jobs, a sharp drop-off from the previous month — economists predicted the U.S. would add as many as 1 million jobs in April.

But, on a more promising note, businesses have added jobs for four straight months.

The $1.9 trillion American Rescue Plan was designed to help mitigate the damage caused by the COVID-19 pandemic and the bevvy of layoffs that came as a result. As Walsh told Spectrum News, the Biden administration has not been naïve to the fact that it will take weeks – or months – before the effects of the COVID relief bill are reflected in the labor market.

But the Biden Administration seems to be looking at the bigger picture: As Walsh noted, Biden’s goal is to help strengthen the middle class and providing them with opportunities in new industries — goals outlined in Biden’s $4 trillion infrastructure proposals, the American Jobs Plan and the American Families Plan.

Walsh said that the president’s proposals provide the opportunity to strengthen the American workforce for the future “to create pathways into the middle class.”

“That's a plan that that's about strengthening the American workforce for years,” Walsh added. “It’s an 8-year investment that in different areas. And it's about creating a stronger economy to get people to the middle class, which what we're talking about today — getting people back to work.”

Asked about the possibility that jobs might not return until 2023 – a possibility floated by some economists – Walsh disagreed: “I mean, economists have different opinions about lots of different things. And I hope on that one, they're wrong.”

He continued: “And I think that, again, it goes back to President Biden, and his plan is to recover from the economy as quickly as possible. I don’t believe his plan is 2023. His plan is making sure that as we continue to move forward here one a day at a time.”

Indeed, Treasury Secretary Janet Yellen said at a White House press briefing on Friday that she believes "we will reach full employment next year," a prediction she made while selling Biden's $1.9 trillion COVID relief bill to the public months ago.

But we’re more than just our jobs. Over the past year, a number of obstacles have prevented adults – notably parents – from returning to full-time work.

This has led to an interesting disconnect of sorts: Millions of Americans who lost their job as a result of the pandemic are still unemployed.

Yet, an increasing number of businesses – including many in the service industry – say they are struggling to recruit new employees.

This suggests there are other burdens – such as childcare, or fear of contracting covid while on the job – that are deterring people from returning to full-time work.

“We certainly still have barriers to employment right now – and childcare is being a major barrier,” Walsh conceded. “Also education: having kids on the hybrid, not full in-person learning,” which would allow parents to work during the school day. “Also, just getting people vaccinated – I think that’s really going to be the key moving forward.”

The administration has received growing criticism from Republicans that the extension of federal unemployment benefits to an additional $300 per week, which is set to last through Sept. 6, is discouraging people from seeking work.

Recently, Republican Govs. Greg Gianforte of Montana and Henry McMaster of South Carolina announced that their states will withdraw from the program on June 27 and June 30, respectively.

Walsh told Spectrum News said he does not believe that expanded unemployment benefits are the reason why the restaurant business in particular is having trouble getting people back to work: "In many states, there's still – when you talk about the restaurant industry, they're not fully open yet. They're open at a 40%-50% capacity level. I think that that that is some of that some of the issues that we're dealing with here."

.@SecMartyWalsh tells me he does not believe extended unemployment benefits are keeping some in the restaurant industry from getting back to work: "They aren't fully open yet. They are open at a 30%, 50% capacity level - that's some of the issues we're dealing with here," he said pic.twitter.com/RH8vsleo1R

"I think that many restaurants went out of business," he continued. "So I believe the workers are there. It's just a matter of all of us working to make sure that the workers can find where the where the opportunities are for them to work."

Over the the next several weeks and months, he said he predicts “we will start to see more and more businesses … hopefully not having the concerns that they have today.”

In the meantime, he said, the U.S. labor market would continue to undergo what he dubbed “temporary growing pains.”

“As we move forward here and is as long as we can continue to see the pandemic numbers go down and see the job numbers go up, we're gonna see our economy strengthen.”

“Our efforts are starting to work,” he said. “But the climb is steep, and we’ve got a long way to go. We’re still digging out of an economic collapse that cost us 22 million jobs.”