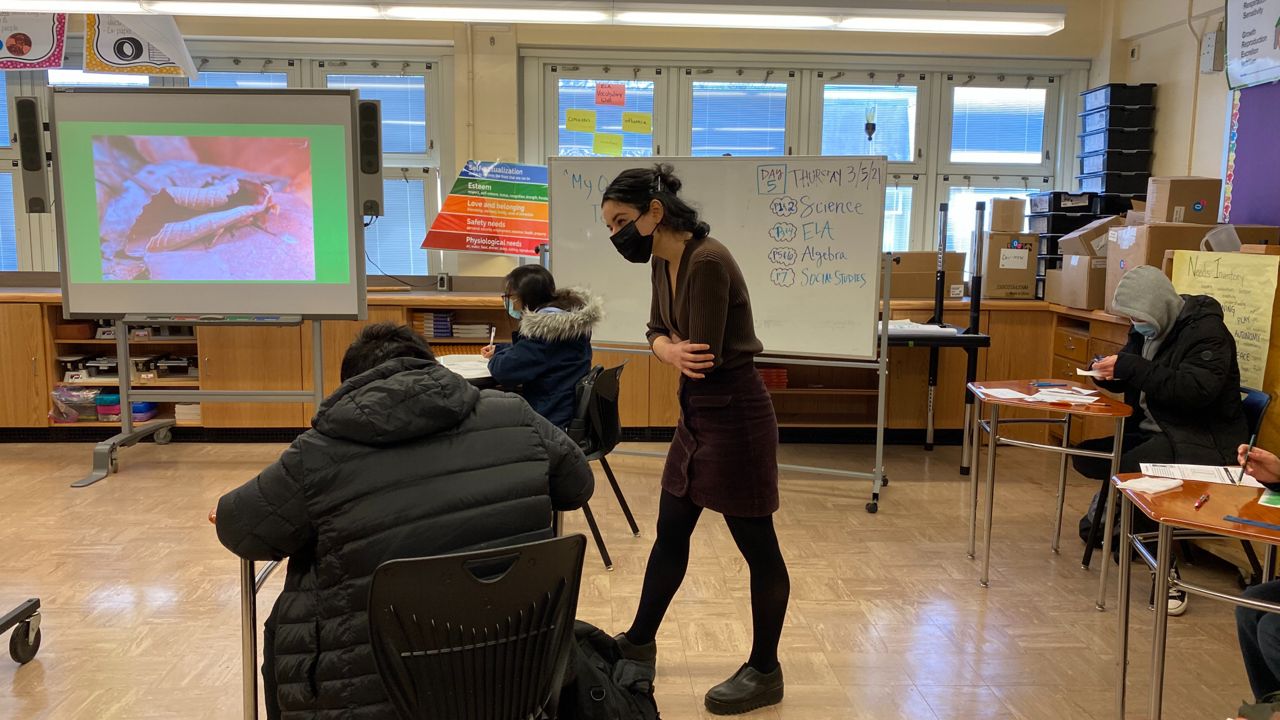 A Look Inside a Brooklyn Middle School, a Year After COVID-19 Hit

Nearly a year after the pandemic shut M.S. 88 in Brooklyn, students line up outside the building.

"They wash their hands, they take their temps, and they go straight to class,” Ailene Altman Mitchell, principal of the middle school, said as she and the school’s comfort dog, Bailey, greeted arriving children.

The pandemic protocols are a hassle, but Mitchell says they're worth it to have her students here in person.

"Even if they're sitting with masks, there's a human around them, in front of them, who cares about them, loves them,” she said.

Since last March, students here and across the city have navigated shutdowns, remote learning, Google Classroom, and blended schedules mixing in-classroom and online instruction. It’s been a tough twelve months.

Eighth grader Nataly Hernandez put it this way: “At the beginning of the year it felt kind of hard. Since it’s already our last year of middle school, it feels like we’re missing something.” 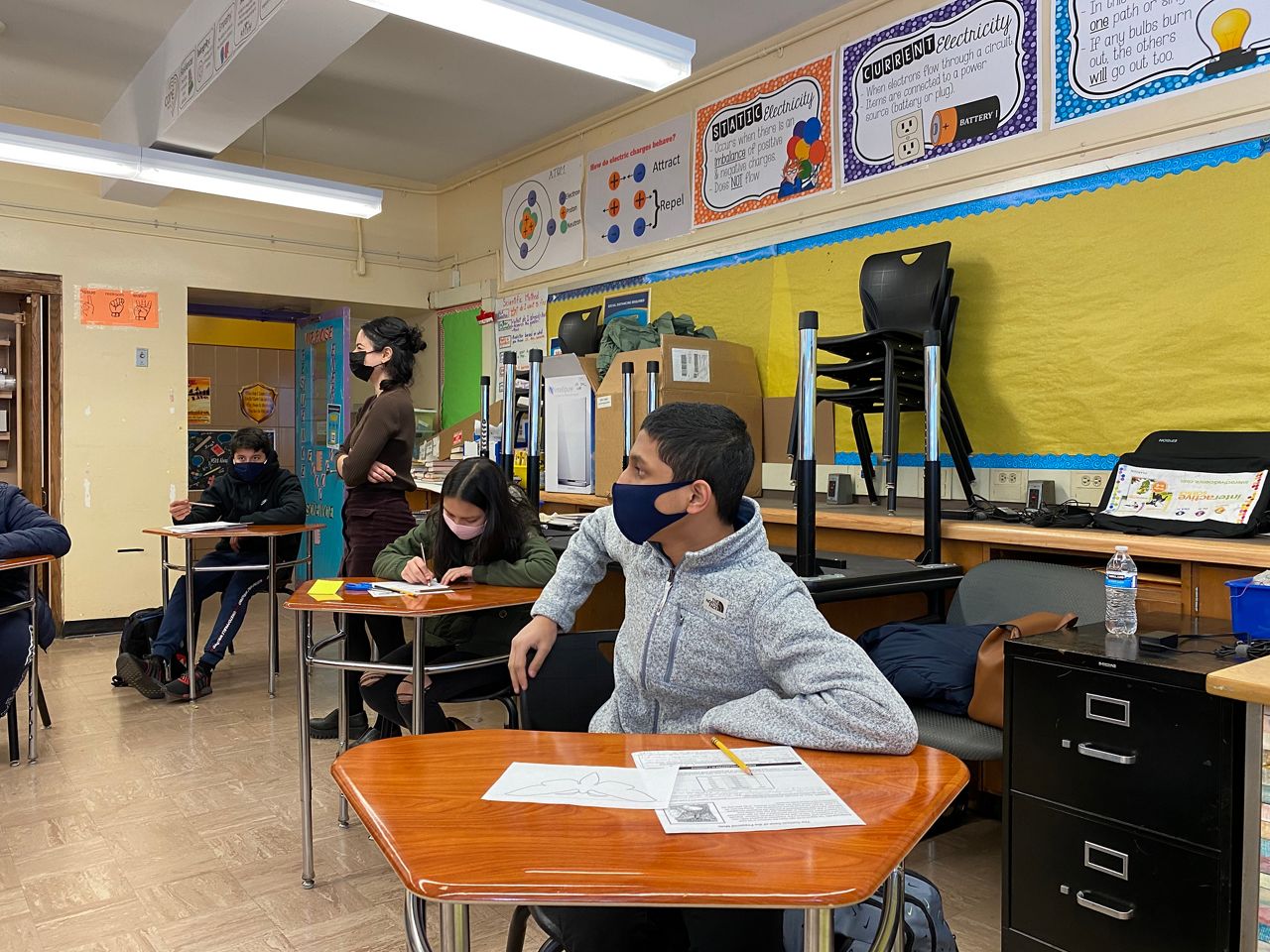 Students, eager to get back in the classroom, attending class in person at M.S. 88.

Now she’s able to attend school in person — and even though it’s only twice a week, she says it makes a big difference.

"I still feel more better, waking up to go into the school building instead of staring at a screen every day,” explained Hernandez.

This year of school shutdowns has almost been a giant experiment. It's unclear to what degree online learning is causing students to fall behind, what's known as learning loss. There have been few studies.

Educators say they are especially concerned whether remote learning will hurt the long term social and emotional growth of children.

“You won't know until they get back just the scope of the challenges that kids may be experiencing, but it's likely to be a lot more than what the system has been prepared for in the past,” said Aaron Pallas, a professor of education and sociology at Columbia University Teachers College.

“It's impossible to concentrate, impossible to make friends, it makes the social situation very hard, and it makes learning nearly impossible,” sixth grader Benjamin Abramovitz said about his experience with remote learning.

To stop the virus from spreading, students must stay in their classrooms. But even with precautions, cases happen. During NY1's visit to M.S. 88, the principal received a call.

"Situation Room,” she said after hanging up. “I think we have everything under control right now." 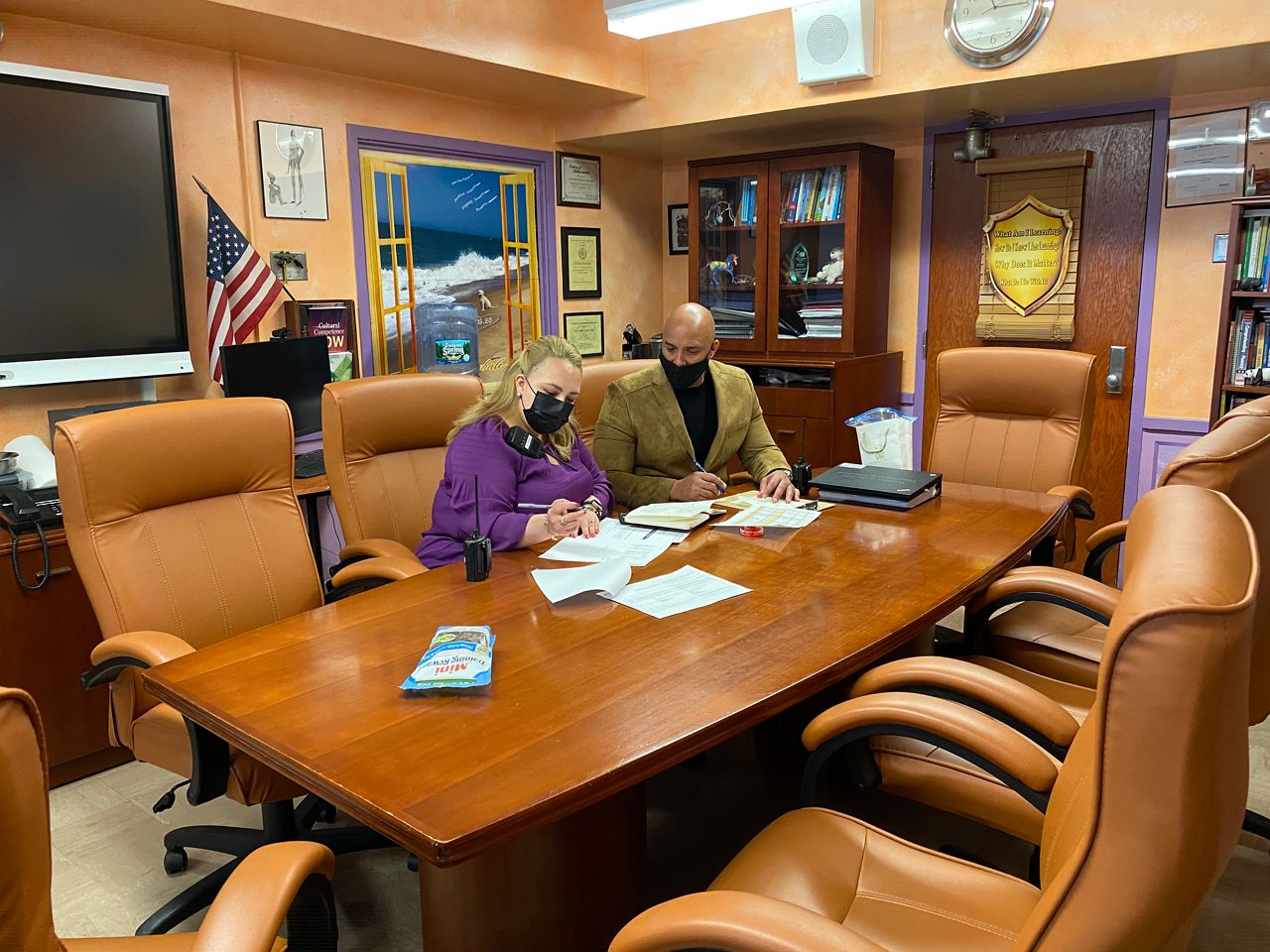 Two assistant principals at MS 88 work on shuffling staff after a seventh grade class is quarantined.

A student has tested positive. The school quarantines a classroom, and notifies parents, in multiple languages.

“It’s scary to be in school with, you know, positive cases. But I think if we do things the right way, and we’re cautious, and we quarantine correctly, and we have programs in place, I think we’re going to come out of this in a great way,” Mitchell said.

Because teachers work in pods, the quarantine means the principal will temporarily lose an entire team of teachers. Mitchell calls an impromptu meeting to figure out how to cover their schedules. It comes as she’s also juggling a random outside audit of her school, a surprise visit from a bus inspector, and checking in with her school’s students as they acclimate back to in-person instruction after a year that was traumatic for many.

“Some days are rougher than others. I will say that there are students that are filled with anxiety. Coming back to school is difficult,” she said.

Lending a helping paw on that front, the school's comfort dog, Bailey. And although M.S. 88 is now short-staffed, Mitchell says she makes sure every student has a teacher to talk to when they're struggling.

Mayor de Bill Blasio says he plans to re-open schools like this one full-time this fall. Mitchell — and her students — say they eagerly await that day.