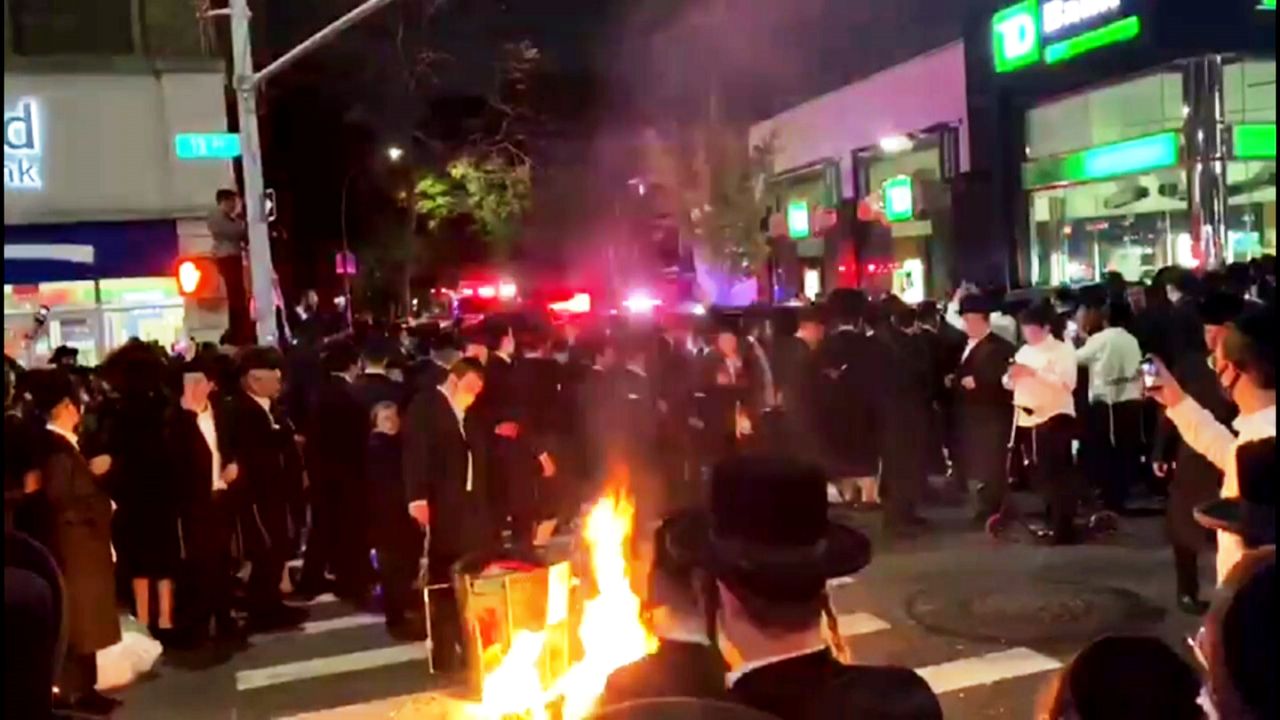 Coronavirus Hot Spots to Shut Down Thursday as Protests Erupt

Coronavirus hot spots in Brooklyn and Queens will shut down for at least two weeks Thursday, Mayor Bill de Blasio said Wednesday, depsite confusion over which neighborhoods will be impacted.

The decision by Gov. Andrew Cuomo Tuesday to close schools and nonessential businesses and to limit the number of people allowed inside houses of worship in coronavirus clusters in Brooklyn and Queens led to protests overnight in Borough Park, where demonstrators forcefully complained the restrictions were targeting the Orthodox Jewish community.

"I'm telling you right now. This is not a protest. Get it out of your heads. This is a war," said Borough Park community activist Heshy Tischler. "And Mr. de Blasio and Cuomo started it. So now I have my soldiers."

Some demonstrators lit a fire in the middle of a street in the heavily Orthodox Jewish neighborhood. One person in the crowd, identified as Berish Getz, was attacked for allegedly informing the police of weddings and other large gatherings that were planned.

“There is a place for peaceful protest, but the NYPD will not tolerate people doing harm to others,” de Blasio warned protesters. “There will be no tolerance for assaults, for damage to property, for setting fires—anything like that is unacceptable.”

Some protesters said they were angered the decision was made in the middle of the Jewish holiday Sukkot, which Jews observe by gathering in temporary shelters known as Sukkahs, as well as in synagogues.

"Especially the last day Sukkos Torah is a holiday for the children especially, it's a holiday people dance with the Torah, it's an essential part of our upbringing and just to take it away we feel in an abstract decision so we feel very strongly that the governor is very wrong in this,” one resident said.

It’s not just community members frustrated with the decision; local lawmakers are also speaking out against the order, calling it "dangerous and divisive."

Four Jewish elected officials, State Senator Simcha Felder, Assemblyman Simcha Eichenstein and City Councilmen Chaim Deutsch and Kalman Yeger, posted a letter online directed at the governor, criticizing the order and his decision to show photos of a packed congregation of Hasidic Jews as he issued it.

The statement said the  governor’s actions "left the implication that Orthodox Jews alone are responsible for rising COVID cases in New York State."

Governor Cuomo and Mayor de Blasio acknowledged the imposition the rule puts on the Hasidic community but said they're just going by data, and not singling anyone out.

"This is about protecting everyones lives," de Blasio said. "This is about all New Yorkers, and when you look at the communities in Brooklyn and Queens, it’s lots of different kinds of people. Remember we’re talking about two of the most diverse places on earth—Brooklyn and Queens—so within these areas are many kinds of people and we want to protect everyone. This is based on data and science."

Individuals and businesses that break the rules face fines, according to the mayor and governor. The penalty for mass gatherings can be up to $15,000 a day and $1,000 for individuals refusing to wear masks or social distance.

“It will take hard work and discipline and certainly there will be sacrifices,” the mayor said. “And I feel for anyone in the communities affected whose livelihood will be put on hold.”

The biggest cluster covers much of southern Brooklyn.

The other two clusters in the city are in Queens.

The plan divides parts of Brooklyn and Queens into three different zones - red, orange and yellow - based on the number of COVID cases, leaving many neighborhoods confused about which zone they fall in. The red zone includes much of Midwood, Flatlands, Borough Park, and Gravesend.

In the red zone, schools are closed and remote only, nonessential businesses are closed, dining is takeout only, mass gatherings are prohibited and houses of worship are capped at 25 percent capacity, 10 people max.

In the orange zone, schools are closed and remote only, high-risk nonessential businesses like gyms and personal care facilities are closed, dining is outdoor only with a four-person max per table, mass gatherings are limited to 10 people both indoors and out and worship is capped at 33 percent capacity, 25 people max.

In the yellow zone, schools are open with mandatory weekly testing, businesses are open, indoor and outdoor dining are allowed with a four-person max per table, mass gatherings are limited to 25 people - both indoors and out- and worship is capped at 50 percent capacity.

For Queens, the clusters are broken up into two areas.

The first red zone is centered around Far Rockaway, with orange and yellow zones extending to Bayswater, Edgemere, and into the Nassau County village of Lawrence.