Restaurants Welcome Diners Back Inside for the First Time Since March

It's hard to find a moment when Tina Skermo is not working. She has been a presence at Tina's Place in Bushwick for more than 50 years.

It’s an old school corner diner that she and her husband bought from her uncle 51 years ago after arriving from Greece.

Skermo's restaurant has survived through the many changes in Bushwick, and continues through the coronavirus pandemic.

She reopened in May after shutting down for a month-and-a-half out of caution for her health and the health of her employees. After months of delivery, takeout and then outdoor dining, she is ready to bring her loyal customers back inside. 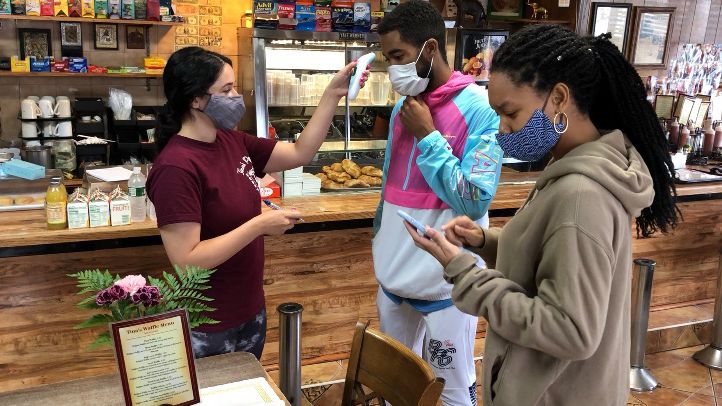 The occupancy rate inside restaurants being allowed by the state for now is 25 percent. Skermo said she is willing to give it a shot, while keeping the nine outdoor tables going as well.

She hopes to expand the outdoor setup when a National Grid gas main system project on Wilson Avenue is completed, giving her more space outside the diner. That is expected to be done in November, with final paving finished in December.

For now, she said she looks forward to having customers back inside her establishment, which hasn’t changed much over the years.

"It's nice to have them inside again. I'm used to the people and people like it,” said Skermo.

Her customers feel the same way. One said they would get a VIP table so they could eat inside every day. Another said as long as there are rules in place and things are safe, it's fine by her.

Not everyone is on board. Customer John Mendez said he likely won't be eating indoors, opting for takeout or dining outside. "Yeah, I'd rather be outdoors,” said Mendez.

Either way, Skermo says things have been going better than she expected, and she has no plans on quitting anytime soon.

"I'm not ready to leave yet, I'll miss it,” said Skermo, which is fine by Tina's customers, who seem to support the diner no matter what the scenario.