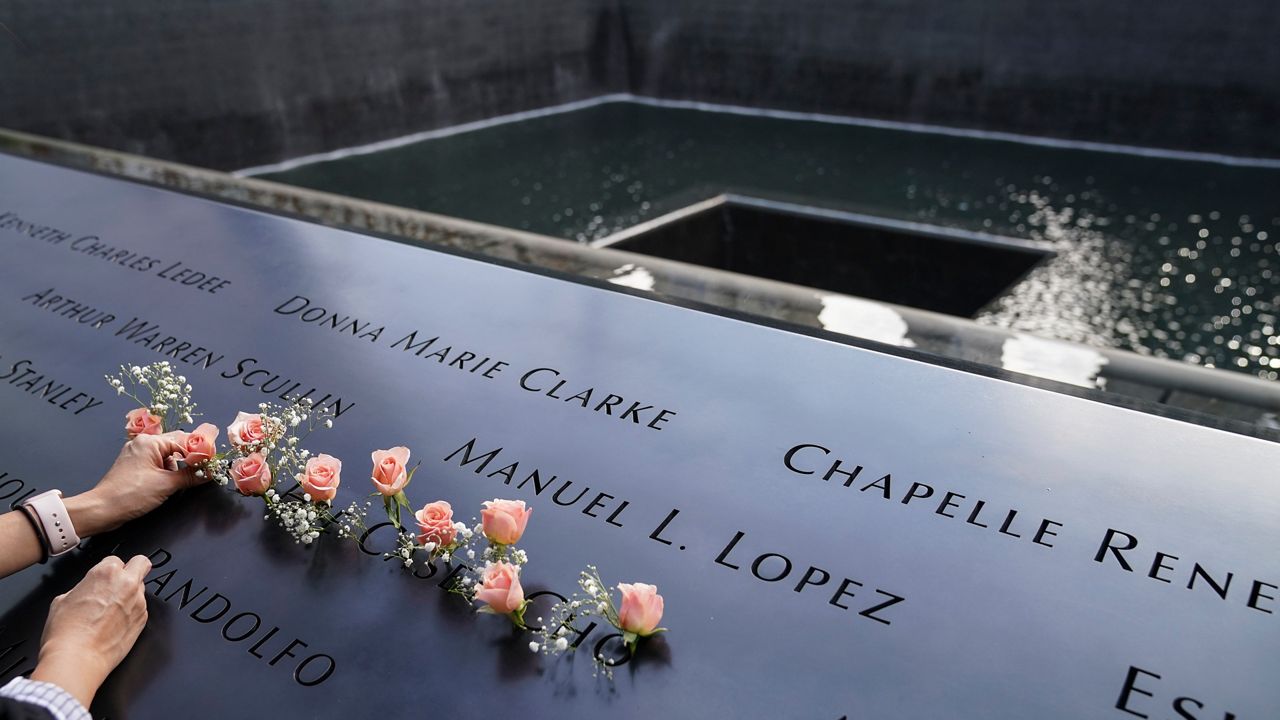 Mourners place flowers in the name cut-out of Kyung Hee (Casey) Cho at the National September 11 Memorial and Museum on September 11, 2020, in Lower Manhattan. John Minchillo/AP.

NEW YORK — Dignitaries and 9/11 families gathered for the 19th anniversary of the September 11 attacks and for a ceremony at the 9/11 Memorial and Museum unlike any other.

The names of the nearly 3000 men, women and children who died on 9/11 and in the 1993 World Trade Center bombing were pre-recorded and played.

Ceremony officials had decided that having 9/11 family members step up to microphones one after another, for the usual live reading of the names was too risky in a pandemic.

Families still gathered around the twin reflecting pools of the memorial.

Facial coverings could not mask the grief of many.

With no live reading of the names, there was no stage in front of those who came to mourn and remember.

Still, as on every September 11, a bell tolled six times, marking the exact moments that day when commercial airliners struck each of the towers and crashed into the Pentagon and a field in Shanksville Pennsylvania, as well as the moment each tower of the World Trade Center collapsed.

It remains the deadliest coordinated attack against Americans on domestic soil.

In a nod to coronavirus guidelines, Vice President Mike Pence, who attended briefly, and Democratic presidential candidate Joe Biden, who stayed and chatted, touched elbows instead of shaking hands before the ceremony. It highlighted what the 9/11 anniversary ceremony has also come to remind us of: the unity of the country following the attacks.

But this year, with an alternative ceremony down the road, a pandemic ravaging lives, and an election only months away, this 9/11 is anything but typical.

What was familiar, in the shadow of One World Trade Center was the feeling that yet another year has not dimmed a searing memory.