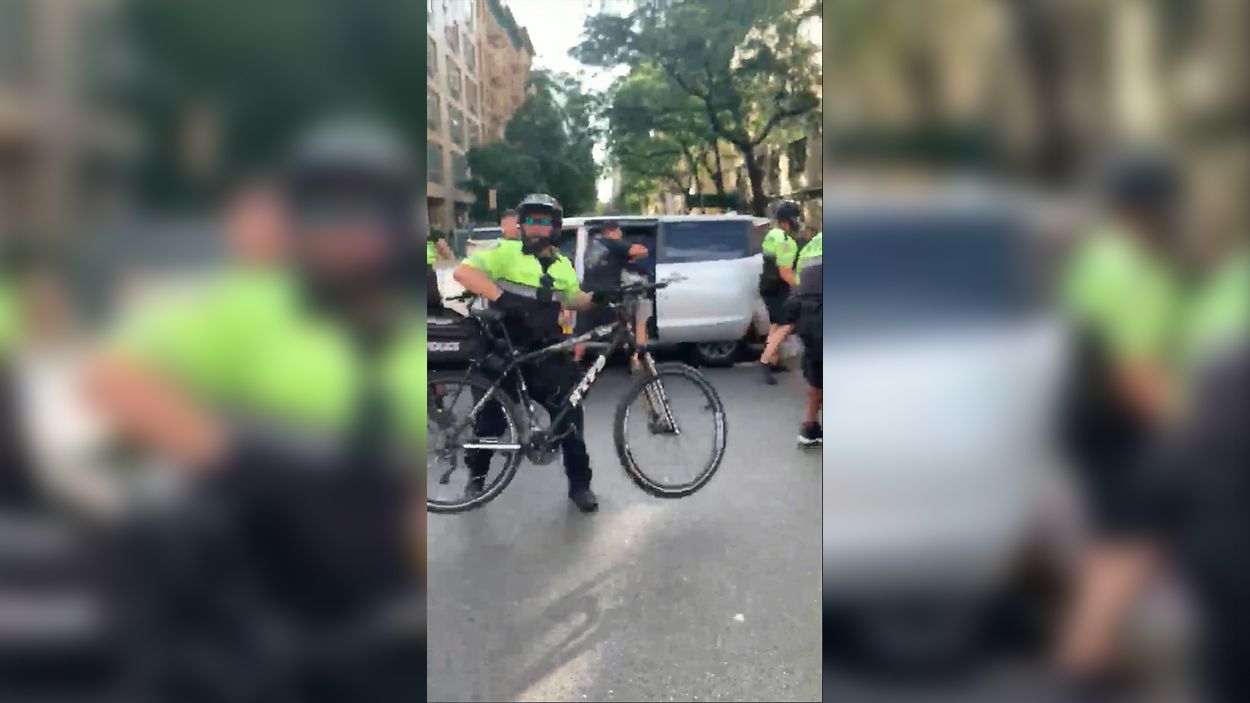 Mayor: Protester's Arrest in Unmarked NYPD Van Troubling, But is No Portland

NEW YORK - Mayor de Blasio and Governor Cuomo are speaking out after video of a protester being taken into an umarked police van during a demonstration Tuesday night sent off a social media firestorm.

The woman has since been released.

During his daily briefing Wednesday, Mayor de Blasio noted it was the NYPD involved in Tuesday's arrest, not federal officers, and said there needs to be more coordination within the command structure when it comes to these types of arrests.

However, damage to NYPD technology that helps keep this city safe will never be tolerated. These cameras are vital resources which help prevent and solve crimes throughout the city. pic.twitter.com/dwv5vkhQiP

“A lot of us have watched in pain what’s been going on in Portland, Oregon. That’s just thoroughly unacceptable. Anything that slightly suggests that is not acceptable," said De Blasio. “I think it was the wrong time and the wrong place to affect that arrest.”

The mayor went on to say people who damage city property should expect consequences.

“If you’re out there protesting, protest peacefully. If you damage property there will be consequences but that was not the time and place," De Blasio said.

"I'm surprised that especially at this time the NYPD would take such an obnoxious action. It was wholly insentive to everything that's going on, it was frightening and to me it's emblematic of the larger problem. We have to repair the relationship between the police and the community writ large," Cuomo said in a phone conference Wednesday.

A video showing the woman being taken into an unmarked NYPD Warrants Squad van quickly went viral on social media.

nypd is out here KIDNAPPING protesters off of the street pic.twitter.com/LCCBj0Ipp8

The protester is seen being taken into an unmarked van by plainclothes Warrant Squad officers in Kips Bay while other uniformed officers keep other protesters away.

Though the NYPD confirmed that the procedure is something used by Warrant Squad officers, critics of the video drew comparisons to a tactic used by federal agents in Portland to arrest protesters there.

Police confirmed that NYPD officers are seen making an arrest in the video. The NYPD is accusing the protester of "damaging police cameras during five separate criminal incidents in & around City Hall Park."

In regard to a video on social media that took place at 2 Ave & 25 St, a woman taken into custody in an unmarked van was wanted for damaging police cameras during 5 separate criminal incidents in & around City Hall Park. The arresting officers were assaulted with rocks & bottles. pic.twitter.com/2jGD3DT3eV

The NYPD identified the person arrested as 18-year-old Nikki Stone.

Police say she is charged with five counts of criminal mischief.

The NYPD said early Wednesday morning that Stone was released and given a desk appearance ticket.

According to the NYPD, the Warrant Squad uses unmarked cars "to effectively locate wanted suspects."

When officers from the Warrant Squad took the woman into custody in a gray NYPD minivan this evening, they were assaulted with rocks and bottles. The Warrant Squad uses unmarked vehicles to effectively locate wanted suspects.

A group called Abolition Park, which was staging a Black Lives Matter protest march in the area, called the incident a kidnapping.

They say the vehicle came upon them with no warning.

"The police cut us off and bumrushed us when we were peacefully chanting. It sucks," said another.

Earlier in the evening, Rivera called for an investigation into "why an unmarked van full of officers was anywhere near a peaceful protest."

I just spoke to the CO of the 13th who said "the NYPD's Detective Bureau Warrant Division identified a wanted person & carried out an arrest."

Clearly we need an ind. review + an immediate explanation for why an unmarked van full of officers was anywhere near a peaceful protest. https://t.co/j4OKqp3MRv

We can’t let what is happening in Portland happen here. Part of police accountability is ordinary citizens knowing who is policing them. When you can’t identify a vehicle taking someone, it causes alarm. Police can’t de-escalate situations if they don’t identify themselves.

Concerned about what we are seeing in this video. Reaching to try and get some answers https://t.co/uhtQGMKIwE