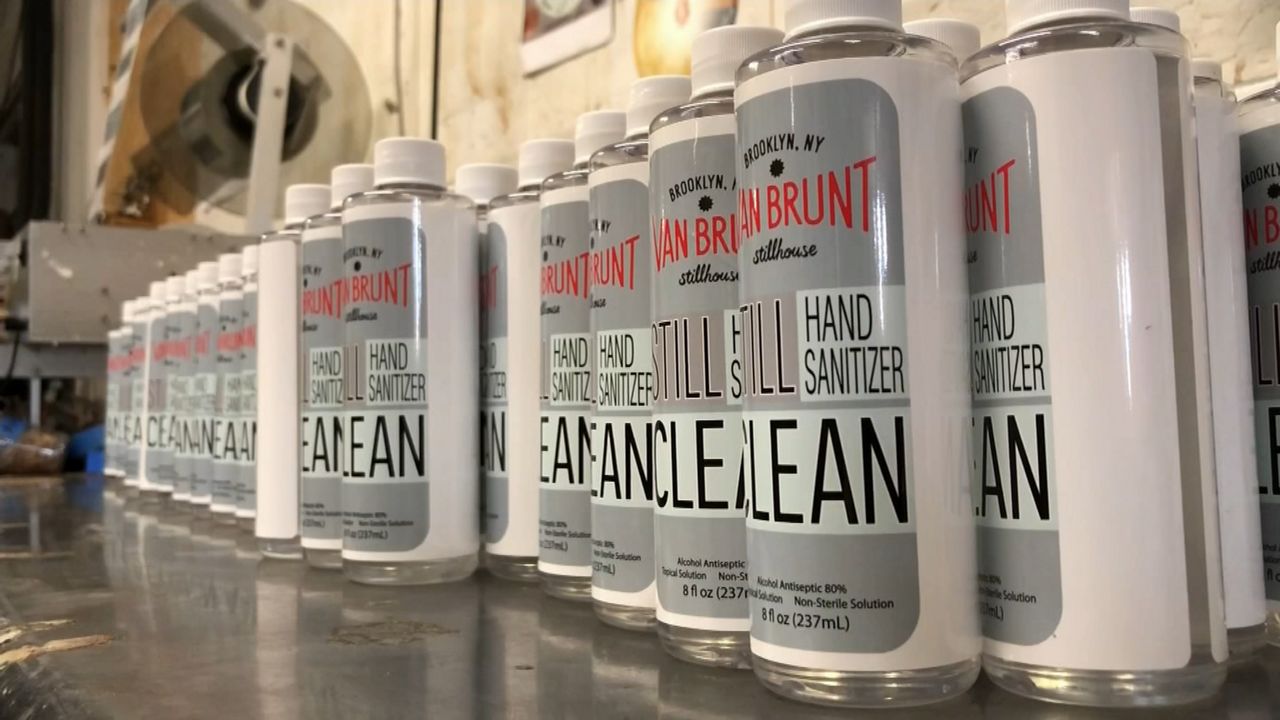 Four styles of whiskey and rum. That’s what Daric Schlesselman, founder of Van Brunt Stillhouse in Red Hook, has focused on for years.

But his Brooklyn distillery, while still delivering to liquor stores, and allowing pickups on individual orders in the late afternoons, lost business during the coronavirus crisis because of shuttered restaurants and bars.

The distillery’s bar room, which served cocktails called Amoxicillin and Red Hook, also had to close and he laid off staff.

But the pandemic has focused him on a different kind of alcohol product: hand sanitizer.

Schlesselman spent weeks scrambling to get federal approval to produce it. His license with the Tax and Trade Bureau is only for beverage alcohol, and on only the second day of production, he was turning out hundreds of bottles of the stuff.

The recipe - 80 percent alcohol mixed with hydrogen peroxide and glycerin, is recommended by the World Health Organization.

He says strange times call for a business pivot.

“The idea didn't so much come to me as it was thrust into my lap,” Schlesselman. “I started getting a lot of phone calls from people looking for alcohol.” One of them was a doctor who was desperate to stretch his supply of N95 masks as far as possible, so he wanted sanitizer to clean them.

But to produce more bottles of sanitizer to meet the overwhelming demand, and large organizations and offices looking to buy sanitizer in bulk, Schlesselman needs more bottles and caps. The problem is, they are tough to come by. Of half a dozen suppliers, he only found one who still had enough to sell to get this batch loaded and out the door.

“I was trying to buy 3000 bottles. They had about 1500 I could buy. I tried to reorder in a second round, and have not come up with anything so far,” he said.

Schlesselman says he tells customers to pay what they can, suggesting that instead of taking advantage of the moment, he just wants to get an essential product out there.

Go online now, and nearly every kind of sanitizer is listed as “prioritized” for hospitals.

Schlesselman is not the only city business owner struggling to meet the demand for a product he just learned to make, and needs containers for.

Marianella Co, a soap boutique in Soho, also added hand sanitizer to their product line. Owner David Foote says because the cost of shipping by truck is so expensive, he’s using Uber Excel drivers to get 900 bottles out a day to his customers across the city.

His two ounce bottle goes for $10 dollars, the eight ounce for $16.

And even though he and his mother, who co-owns the business, developed the hand sanitizer before the virus began battering the city, the demand for all kinds of containers during the pandemic is causing a shortage that threatens his ability to deliver.

So enterprising companies like Marianella Co and Van Brunt Stillhouse are taking things a day at a time as the crisis unfolds.

With the future unknown, at least one thing's for sure for Schlesselman: his original product line will at have time to age.