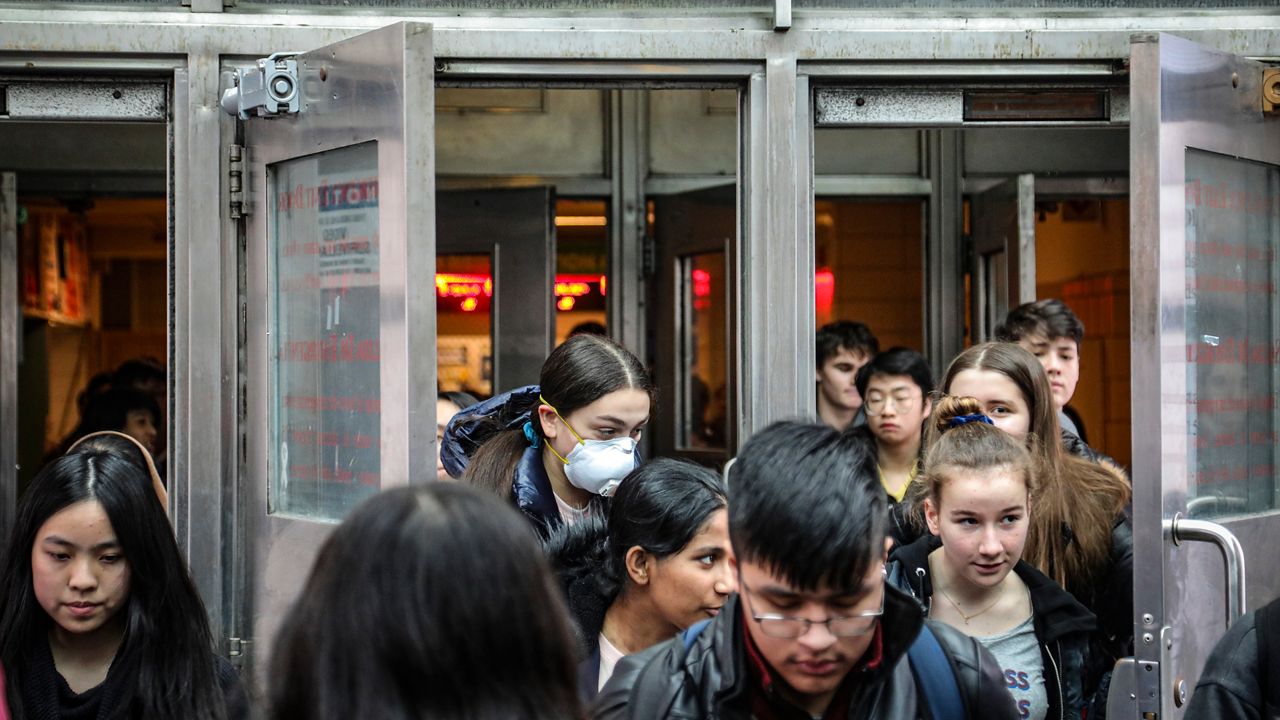 Students at Stuyvesant High School leave after classes end for the week, Friday, March 13, 2020, in New York. As concerns continue to grow around the spread of Covid-19, the city's Mayor Bill de Blasio has been reluctant to close the school system because of the consequences for students and families. (AP Photo/Bebeto Matthews)

Student attendance is plummeting, charter schools are closing, and now there’s been a call from the city's teachers union for the mayor to shutter the entire public school system to stop the spread of coronavirus.

"We have to start closing the school system down because there's too much misinformation out there,” said Michael Mulgrew, the president of United Federation of Teachers Union. “We're moving around 1.4 million people every day our school system is open. That's students and adults."

Although attendance in public schools dropped to 68 percent Friday — down from 85 percent the day before — Mayor de Blasio says no widespread closures yet.

"A number of kids didn't come to school today and that's a concern,” de Blasio said at a news conference Friday. “We'll get you the exact number, but over 600,000 kids did come to school, and again that's a huge number of young people and their families who are depending on us."

The mayor spoke after meeting for more than an hour with Mulgrew.

"He clearly believes it's in the city's best interest to keep the schools open and we just disagree at this moment," said Mulgrew.

Still, both men say they'll work together on taking measures short of closure that could help keep students and teachers safe, including changing physical education classes and in some cases serving breakfast and lunch in classrooms instead of in crowded cafeterias.

"It's ok to have differences on the big strategy,” de Blasio said. “We still are going to work together every single day to make sure everyone is safe."

Mulgrew is proposing that the city open childcare and food distribution centers if the schools close, but de Blasio argues there is not firm evidence a system-wide shutdown would stem the spread of the illness unless children were isolated. A closure, he says, would harm working parents, including healthcare providers. Governor Cuomo essentially made the same point during his briefing Friday.

The city's leading charter school networks, which also serve students who depend on schools for meals or childcare are closing their doors. That includes the city's largest charter, Success Academy, serving 18,000 students. After class Friday, many parents say it was the right call, even if it may make life more difficult.

"It is concerning,” said one parent. “We don't know what's going to happen, we don't know how long the school is going to be closed for, and we still have to work, so that's something. But we are more worried about what's going on. We want to make sure that they are healthy."