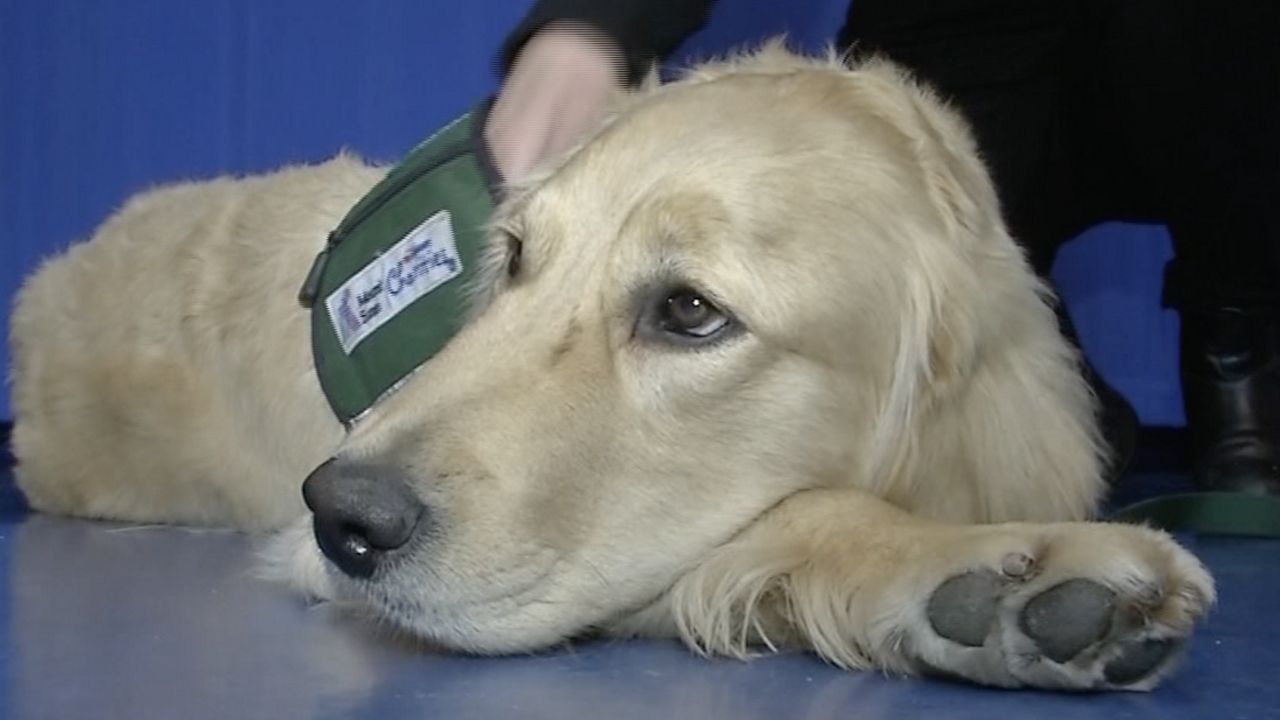 WASHINGTON, D.C. — They are man’s best friend. And if Ohio Republican Rep. Steve Stivers gets his way, service dogs will become a key tool veterans can use to combat post-traumatic stress disorder.

“Our bill creates a dog therapy working program for these soldiers that have post-traumatic stress, to build the bond between themselves and an animal,” Stivers (R-15) said in an interview with Spectrum Washington reporter Taylor Popielarz.

The “Puppies Assisting Wounded Servicemembers (PAWS) for Veterans Therapy Act” would create a five-year pilot program that would bring the Department of Veterans Affairs together with non-profits to teach veterans how to train dogs to provide therapy for PTSD.

Once the dogs are trained, the program would allow the veteran to adopt their dog to continue using for themselves.

Stivers, who is a brigadier general in the Ohio Army National Guard, said he has seen firsthand the impact service dogs can have for vets struggling with PTSD.

“I had a solider who was under my command in Iraq who came back, had post-traumatic stress, and he got paired with his dog Athena,” Stivers said. “And for the first time in ten years, he was able to get on an airplane, he was able to go out in public with his fiancé to have dinner. This dog gave him his life back.”

But the VA has been slow to acknowledge that service dogs can be helpful in fighting post-traumatic stress.

The department restarted a study on the topic in 2015 after a previous one was suspended. In a press release announcing it four years ago, the VA cautioned, “To date, there is ample evidence on the benefits of service dogs for people with physical disabilities, but very little in the area of mental health.”

He pointed to a report released by the Purdue College of Veterinary Medicine last year that states, “A preliminary study that took place in 2015-16 showed that overall symptoms of PTSD were lower among war veterans with service dogs.”

“It’s time to acknowledge the clinical data that’s already out there that dog therapy absolutely works,” Stivers said. “It’s ironic that it’s easier to get horse therapy at the VA than it is to get dog therapy. And there’s millions of dogs in this country and they’re much more easily accessible than horses.”

Currently, the VA will help a veteran get a service dog for things like a visual or mobility impairment.

Stivers’ bill is his latest attempt over the last two years to get PTSD added to that list.

The legislation now has 118 cosponsors from both sides of the aisle, and Stivers said the VA’s chief medical officer supports it. But there’s concern that impeachment and a possible government shutdown could halt the progress being made.

Stivers said the legislation also has bipartisan support in the Senate, and a companion bill is being worked on there.