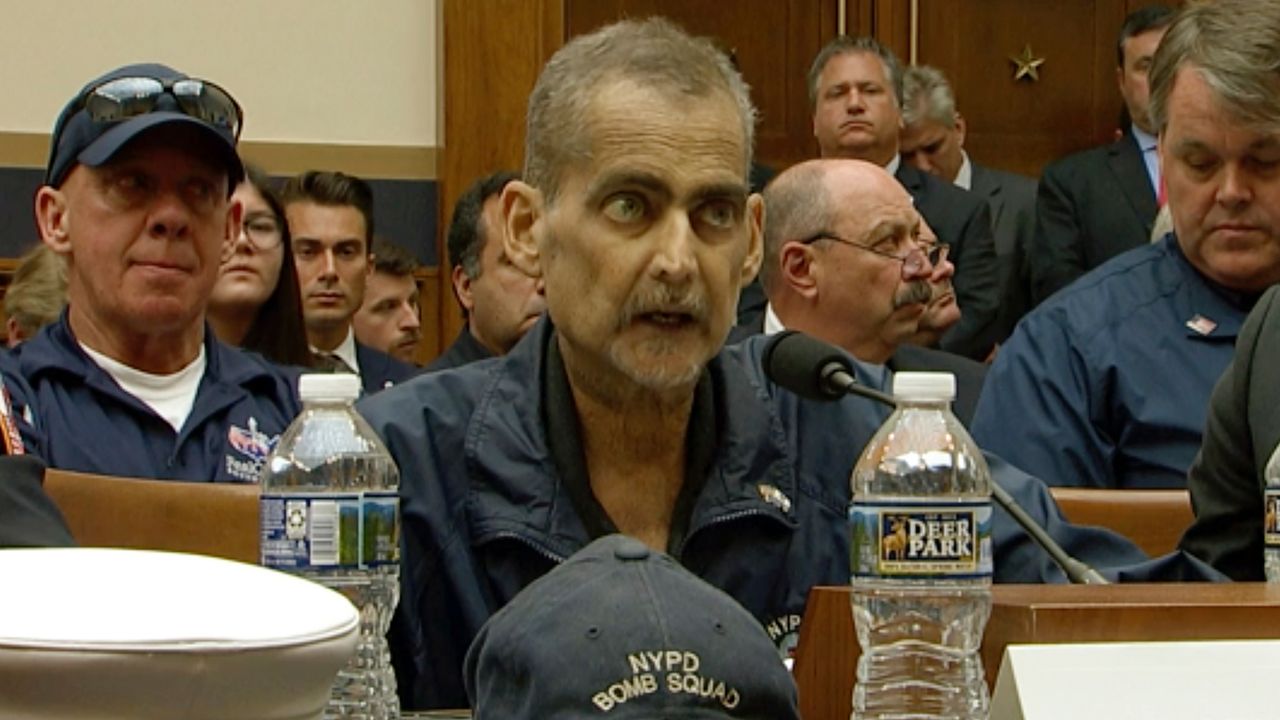 A file image of 9/11 First Responder Luis Alvarez, center, speaking at during a hearing on Capitol Hill on June 11, 2019. US Network Pool via AP, Pool.

Family, friends, and colleagues mourned the death of 9/11 first responder Luis Alvarez at his wake Tuesday, remembering a center figure in the fight to permanently the fund the Victim Compensation Fund.

Relatives spoke publicly about the former NYPD detective's battle to help others during an impromptu news conference Tuesday at the Long Island funeral home where Alvarez's wake was held. They called him brave, stubborn, and a fighter.

#HappeningNow Huge #AmericanFlag being placed over funeral home where wake is being held for former #NYPD detective #LuisAlvarez. Baldwin and Oceanside LI fire departments are placing the flag as officers arrive to pay their respects to the September 11th first responder. @NY1 pic.twitter.com/m4Nv6LXzp9

Alvarez's son, his brother, and co-workers from the NYPD Bomb Squad recalled how Alvarez was so sick but still maintained his fight for federal money for the fund.

The 53-year-old entered hospice care just days after he appeared with former "Daily Show" host Jon Stewart to plead with Congress to extend the Compensation Fund. He died last Saturday.

"We pray that Congress and Senate heard his message and that he will have died a happy man for his efforts for the World Trade Center Fund, for the Victim Compensation Fund," brother Phillip Alvarez said at the news conference. "I will guarantee that if we need to go down there again, I will go down there again."

"Despite 69 rounds of chemo, he continued to fight and continued to use what voice he could to get his message across," said David Alvarez, Luis's son.

"He was just a normal man who did this, so anyone can do this," said Michael Alvarez, Luis's nephew. "That's what he wanted. He didn't want to be a hero."

A House panel approved extending the life of the fund indefinitely earlier this month, and Senate Majority Leader Mitch McConnell announced this week that the Senate will vote on a bill to do the same.

Alvarez died from colon cancer which he believed was linked to the time he spent on the pile at the World Trade Center site. He testified to Congress that he had undergone, to that point, 68 rounds of chemotherapy since being diagnosed with cancer in 2016. He was a former U.S. Marine, and worked as a Bomb Squad detective for the NYPD.

Mayor Bill de Blasio was on Long Island to pay his respects.

Alvarez's funeral will be held Wednesday morning at Astoria's Immaculate Conception Church, where his father served as a deacon for years.

NY1 will have live coverage.