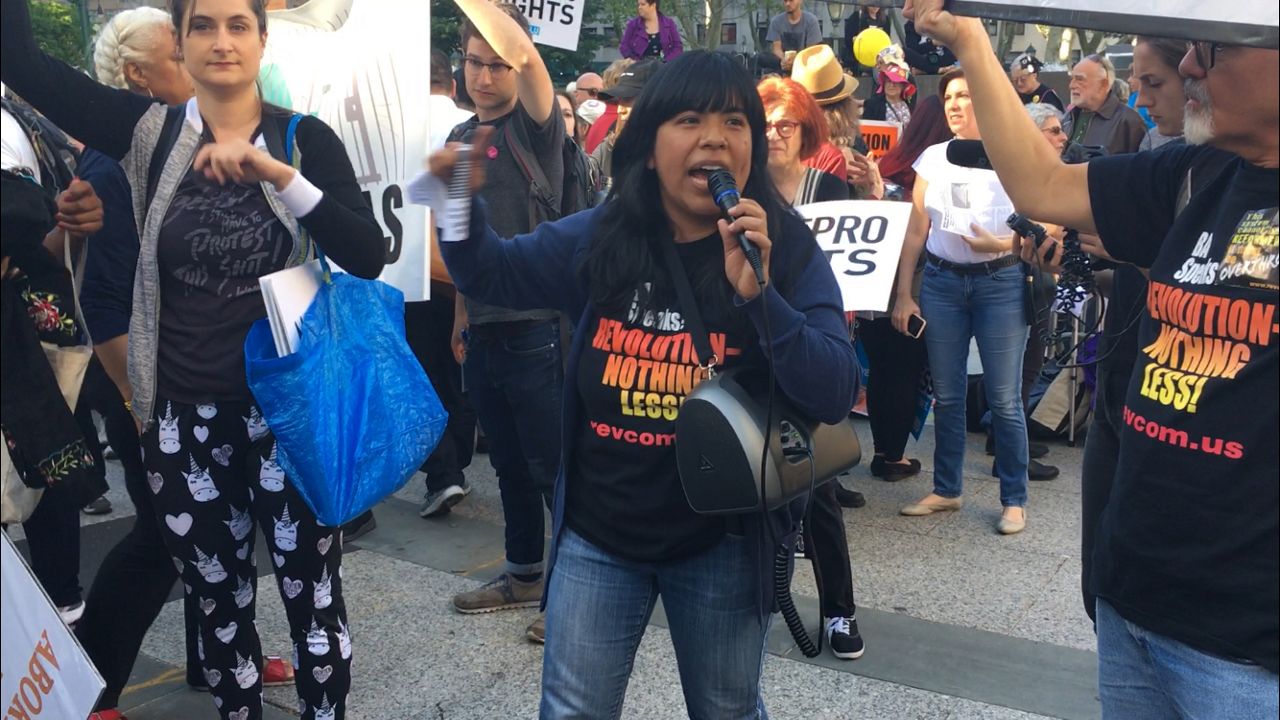 Advocates rally in Foley Square in solidarity with pro-choice rallies on Tuesday, May 21, 2019. Lori Chung/NY1.

Advocates Rally in Foley Square Amid Wave of Abortion Bans in the U.S.

Advocates rallied in Manhattan on Tuesday evening to denounce a wave of sweeping abortion bans being enacted this year in Midwestern and Southern states.

The rally in Foley Square, which Planned Parenthood's New York City chapter organized, drew hundreds of pro-choice demonstrators who said they were appalled by what they saw as an assault on women's rights.

Demonstrators in #FoleySquare had a message to send Tuesday evening amid sweeping abortion bans being enacted this year in the U.S.

The rally was held as part of a nationwide day of action to protest efforts to overturn Roe v. Wade. https://t.co/fqFIrOzid2 pic.twitter.com/zUmR5jBdNM

One man who attended the rally said he remembered starting his medical career at a time when abortions were illegal.

"People forget what it was like before it was legal to get one," he said. "I was not the only one — I was just there for a month in an emergency room and I remember these four young women — and it doesn't have to be young women, but they happened to be young women — who came in bleeding to death from botched abortions. And this was just going on and on and on."

"These laws aren't going to be banning abortions or getting rid of abortions; they're just getting rid of safe abortions," one woman said. "It's forcing people with uteruses to resort to unsafe and dangerous practices that are deadly."

The rally was held in solidarity with hundreds of pro-choice demonstrations scheduled in all 50 states, including at the U.S. Supreme Court, statehouses, and other sites across the country.

Organizers — including Planned Parenthood, NARAL Pro-Choice America and the American Civil Liberties Union — predicted tens of thousands of people would attend events across the country. A slew of speakers, including Mayor Bill de Blasio, rallied with New Yorkers.

“Hands off the bodies of women. Hands off the rights of women,” Mayor de Blasio says at the @PPFA #StoptheBans rally. “This is a fight for our lives but I know in my heart it’s a fight we are going to win.”

“Women are more than half the population. Women brought you into this world and women can take you out (pause) of office,” @NYCFirstLady says, in comments directed at the pols who are effectively banning abortions at #StopTheBans rally in Foley Square tonight. pic.twitter.com/mV3nX24ly9

The "National Day of Action to Stop the Bans" came in response to a near-total ban on abortion recently signed into law in Alabama, as well as bills enacted or nearing passage in Mississippi, Kentucky, Ohio, Georgia, and Louisiana aimed at banning abortion once a fetal heartbeat is detected. That can happen in the sixth week of pregnancy, before many women know they're pregnant. Missouri lawmakers have passed an eight-week ban.

None of the laws has taken effect, and all will likely be blocked while legal challenges play out. Ban supporters hope one or more of the measures might reach the Supreme Court and possibly trigger reversal of the 1973 Roe v. Wade decision that legalized abortion nationwide.

In Washington, a demonstration outside the Supreme Court drew hundreds of protesters and several Democratic presidential candidates. Sens. Cory Booker of New Jersey, Kirsten Gillibrand of New York, Bernie Sanders of Vermont, and Amy Klobuchar of Minnesota, in addition to Reps. Eric Swalwell of California and Tim Ryan of Ohio, were among the attendees as multiple members of Congress spoke to a crowd that hoisted signs defending abortion rights.

"I cannot tell you how important this moment in our country's history is," Gillibrand said. "Do not allow this moment to lapse without putting everything you can behind it. Organize, advocate, and vote."

Some protesters carried purple signs that declared, "Abortion is a human right." Among their chants: "No church/No state/Women must decide their fate."

Lauri Ploch, 67, came from Alexandria, Virginia, with a sign depicting a drawing of a uterus and the message, "Mine, not yours."

Ploch recalled the conflict over birth control and abortion rights in her youth, and suggested that her generation mistakenly believed that such struggles were in the past.

"I got complacent for a little while. I think a lot of people did," she said. "Right now we need to really get up in their faces and show that we are ready to fight to keep our rights."

In Atlanta, several hundred protesters jammed onto the steps of the Georgia statehouse.

Chants of "Vote them out!" and "My body, my right!" blared through a loudspeaker as passing drivers honked their horns in support. One woman carried a coat hanger with a sign that read, "Not going back."

Brandi Borgwat, 42, drove about 30 minutes from her home in Woodstock, Georgia, to join the protests.

"I didn't protest before because it sounded so insane that I didn't believe it would pass," Borgwat said of Georgia's new law. It's scheduled to take effect on January 1, but opponents have vowed to sue to block it.

In St. Louis, several hundred protesters gathered in a park between the Gateway Arch and the historic courthouse where the Dred Scott case decision that deemed black slaves as property, not citizens, was heard.

Katie Lorentz, a 19-year-old college student, said she worries that if she ever needs an abortion she'll be criminalized.

"It puts a lot of women in danger," Lorentz said of the new law. "States with strong anti-abortion laws have higher women mortality rates and infant mortality rates."

That same message was echoed by several hundred people gathered in the Utah State Capitol Rotunda. Their chant: "My body, my choice!"

Utah legislators recently passed a ban on abortions after 18 weeks but have agreed not to enforce the ban as a court challenge plays out.

In the crowd of abortion rights activists, one counterprotester, Deanna Holland, stood with an anti-abortion sign urging people to care for unborn fetuses.