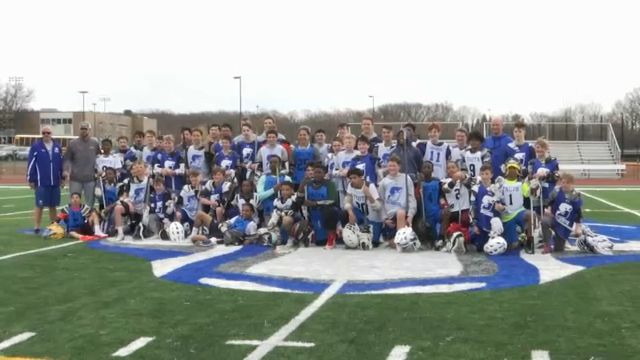 For the third straight year, players from Harlem Lacrosse spent the weekend upstate, visiting players from the Shaker district in North Colonie.

It all started in 2008. A Teach for America participant named Simon Cataldo joined the faculty of Frederick Douglass Academy I in Harlem as a Special Education math teacher with Teach for America. Cataldo was struggling to get his kids engaged. He introduced lacrosse as a way to encourage and motivate his students in the classroom.

"I would say maybe 10 years ago, people would look at you like you're crazy in that area and they would've said, 'What is that sport?' " Hurley said.

High school sophomore Dan Lugo, a member of Harlem Lacrosse, said he discovered lacrosse as his family prepared to move out of a shelter and into a new apartment.

"I saw like a mixture of soccer and football with sticks and it was like nothing I'd ever saw before, and I fell in love with it," Lugo said.

Lugo got his first stick in seventh grade and joined Harlem Lacrosse. Over the weekend, he was one of more than two dozen players who spent the weekend in the Capital Region. The kids from Harlem stay with families of players on Shaker's team.

"We get to meet new kids that are from other parts of the state, but that still love the game that we love," said Sal Minucci an 8th grader at Shaker.

And it builds bonds.

"It doesn't matter where you're coming from everyone loves the game equally," said Alex Kabalian, a seventh grader at Shaker.

The families who offered up their homes and lots of love were organized by Katie Chudzinski. Her sons play lacrosse, too. She and her husband Greg have opened their home to the Harlem players the last three years.

"I look forward to it every year. It's a great experience. The kids are the nicest boys, they're so respectful, and the friendships that they form really do last past this weekend and for years to come," Chudzinski said.

The kids took in a Siena game on Saturday and participated in a clinic with the players on Sunday. All the participants had a team dinner at one family's home on Saturday night which included pizza and lots of basketball, lacrosse, and spending time together just hanging out.

But beyond the sport, the Harlem Lacrosse program is heavily focused on academic success.

"Being able to come up to Siena College and see college lacrosse and understand it's a sport they're playing with kids that look like them, and athletes that are doing the things they're doing, and I think it's starting to put these goals and these dreams much more in their heads," Hurley said.

While the weekend is centered on learning new skills, teamwork and the potential opportunities in the future, the kids get a little something more.

"I promise you, if you keep playing lacrosse, you're gonna see each other again," Hurley told the kids after Sunday's clinic and scrimmage wrapped up.

With the ability to keep in touch via social media, kids told Spectrum News they'd exchanged Snapchat names and were planning to play Xbox together.

"I love the family that I'm staying with because the dog is amazing, their house is awesome and their kids, they're like my brothers," Lugo said.

And the Shaker kids agree.

"I think this weekend is beyond lacrosse. It's like, you almost think of them as your family," Kabalian said.

Harlem Lacrosse has expanded beyond Harlem and now serves over 850 students nationwide across 19 programs in five cities. Since 2011, Harlem Lacrosse students have maintained a 100 percent on-time middle school graduation rate, have passed their classes at a rate 20 percent higher than that of their peers at the program's school sites, and have earned more than $15 million in scholarship offers to independent schools and colleges.