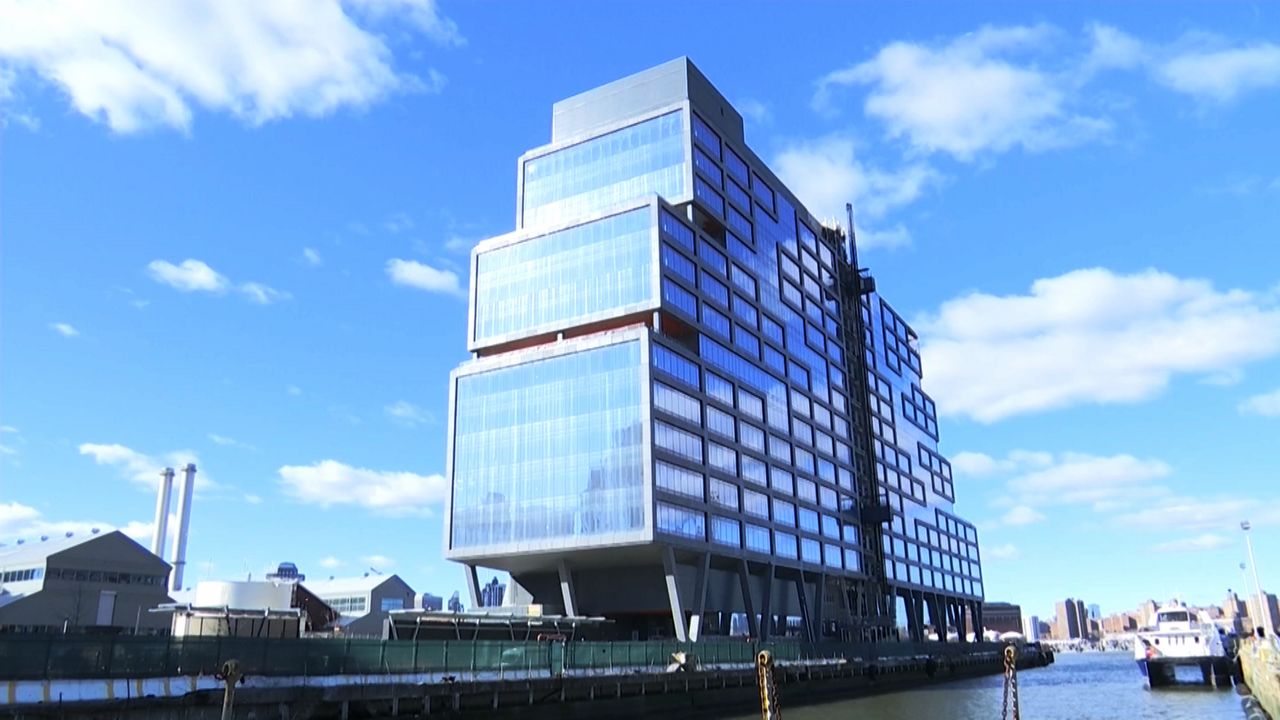 BROOKLYN, N.Y. - Where some saw a vacant pier at the Brooklyn Navy Yard, CEO & Co-Chairman of the Rudin Management Company Bill Rudin saw a future hub for the city's growing tech industry.

"That’s what the world is about today. Attracting and retaining employees, keeping them happy, and competing against large companies like Google and Facebook," said Rudin. "Probably four to five-thousand, maybe six-thousand thousand jobs will be here in the building."

Dock 72 is a 675,000 square foot building, under construction since 2016. When done, it will feature traditional offerings such as office space and conference rooms, along with unique amenities like a full service fitness center, a food hall complete with juice and latte bars, a ground level basketball court and rooftop terrace and spectacular views of Lower Manhattan.

"The whole idea is for people to come here and not want to leave," Rudin said.

The anchor tenant at Dock 72 is WeWork, which claimed six stories on the river-facing side of the building.

The rest of the space is still open, but Rudin says he's confident more leases will follow.

"Today, every company is a technology company. A bank has tech divisions, fin-tech, health care, so it’s a broad range of prospective tenants that we’re talking to," Rudin said.

This isn't Bill Rudin's first rodeo. He comes from a dynasty of New York City developers that started with a single brownstone building in 1905.

Today, the family-run company manages dozens of commercial and residential properties around Manhattan. But Dock 72 - which is being co-developed by Boston Properties - is a step outside their wheelhouse.

"To go across the river into Brooklyn was a challenge, but it really energized us," Rudin said.

While white collar jobs are moving in, Dock 72 still has blue collar neighbors - including a working drydock right next door. But Rudin says it's a natural fit.

"It’s a combination of the old, and the new. I think people get inspired by that, and that’s why we try to create these big windows that look out onto the water," Rudin said.

Just up the river is Long Island City, where Amazon plans to set up their own waterfront development. But as controversy swirls around the conditions of that project, Rudin says developers have a responsibility to be sensitive.

"My father and uncle and grandfather taught my generation, my sister and my cousins, that we don’t live on an island. Our buildings are part of the neighborhood and you have to care about a neighborhood," Rudin said.

"I know that I’m trying to do something positive, create jobs, create a tax base. This is what we do," Rudin said.

The grand opening of Dock 72 is scheduled for April of this year.