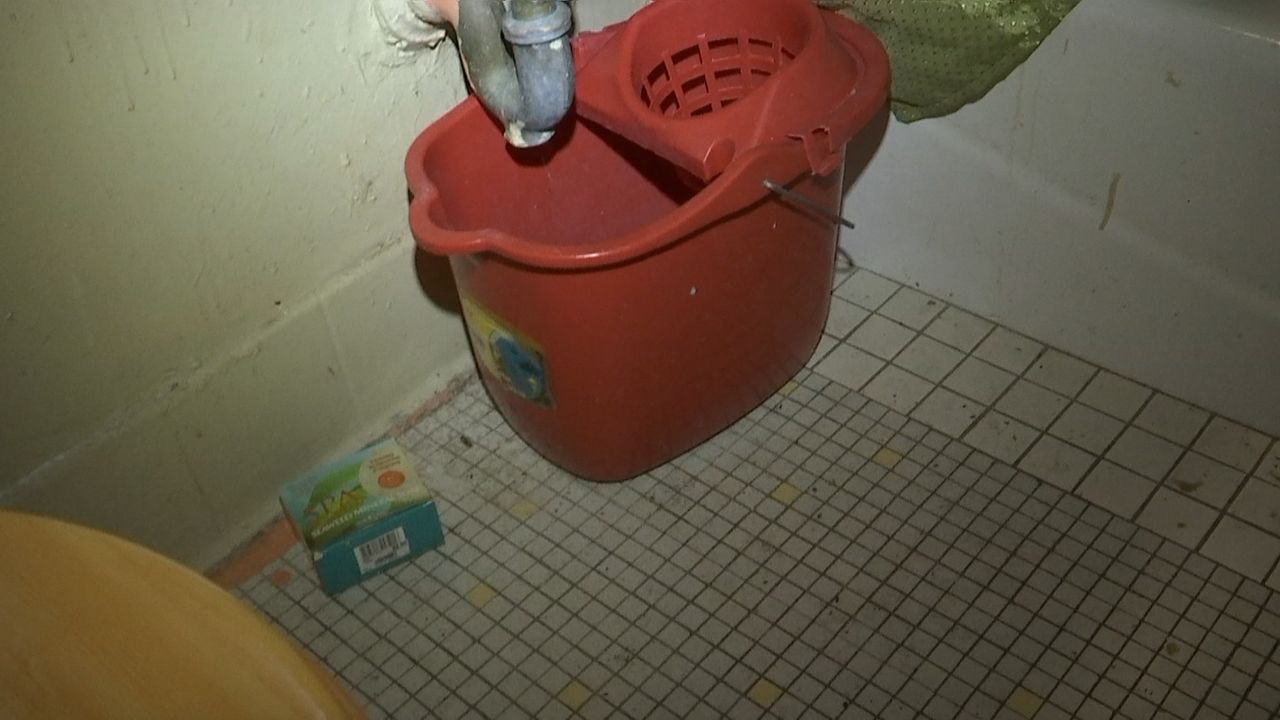 Residents say a sign outside 456 Richmond Terrace has been missing two letters for at least 14 years.

Paint chips hang above the entrance, mold grows on brick, and sections of the facade are peeling — a concern for parents of the many small children at the housing development.

"On a regular basis, children are playing with this, they're putting it in their mouths," Blas said. "I've requested it to be fixed several times, we've done walk-throughs with management, and, as you can see, it is still like this."

Things are not much better inside the building, starting with the front door, which, according to tenants, always seems to have a broken lock.

"In the winter time, that allows homeless people, drug addicts, all sorts of people to enter our building, use the bathroom — to use our staircases as their personal bathroom," Blas said. "There's urine, there's fecal matter in the elevator and in the staircases."

Upstairs, a leaky pipe is just one of the issues in Ja Johnson's apartment. Bugs are in his kitchen, under the sink, in the cabinets, in the refrigerator, and even in the freezer. More are in the bedrooms and in the bathroom, which Johnson says is prone to flooding. He says the last time his toilet overflowed, it took the NYCHA four days to respond to the emergency.

"I think it's just been years and years of getting away with treating people like this, to where it just became the normal to them," Johnson said.

Community organizers have been hoping to expand their garden to a patch of lawn at the development, but they've been stopped because of an ongoing issue with raw sewage that's leaking onto the grass.

"It smells and, you know, if you go in there, you don't know if you going to sink or what you're going to do," said Shirley Scott, a resident of the Richmond Terrace Houses.

Blas and Johnson attended a NY1 town hall Tuesday that focused on the city's public housing system they say they've brought all of their issues repeatedly to NYCHA, which says it is working to address them.