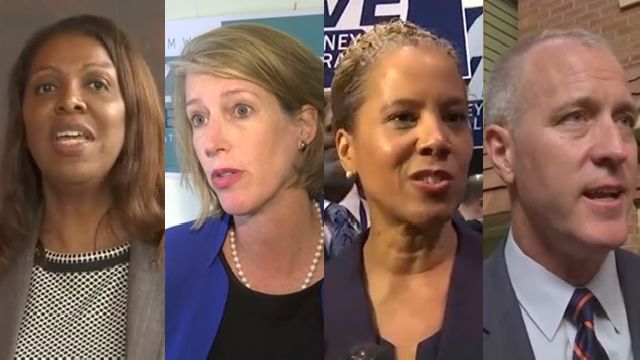 The four contenders in the Democratic primary for state attorney general have agreed to a statewide debate right on NY1. Political anchor Errol Louis will be co-moderating the debate, which will take place on Tuesday, August 28 at John Jay College. NY1's Bobby Cuza filed the following report.

When allegations of abusing women drove state Attorney General Eric Schneiderman from office in May, it created an unexpected job opening and a glut of interested candidates. But Public Advocate Letitia James quickly vaulted to the top of the field, winning support from the state Democratic party and Governor Cuomo, and piling up endorsements and campaign cash.

But James is also no shoe-in.

Law professor Zephyr Teachout gave Governor Andrew Cuomo a scare in the 2014 governor's race, and is now hoping to ride the progressive wave embodied by Alexandria Ocasio-Cortez, who's endorsed Teachout.

"In different ways, all of the other candidates - the three candidates for attorney general - have close ties to the establishment. And I am, as I was four years ago, committed to bringing a new kind of politics to New York," Teachout said.

Hudson Valley Congressman Sean Patrick Maloney is another formidable candidate. The most centrist of the candidates, Maloney is sitting on four million dollars in contributions, most of it raised for his Congressional re-election campaign.

Then there's Leecia Eve, who boasts a varied resume that includes work as a litigator, as a staffer to Senators Joe Biden and Hillary Clinton, and an economic development post in the Cuomo administration.

"This is not something that you talk about in a classroom. You need someone who is experienced, who's qualified, who has a proven track record of fighting in the trenches for social justice," Eve said.

While James is considered the frontrunner, a poll last week shows the race is unsettled.

A plurality of registered Democrats, 42 percent, is undecided, while James polled at 26 percent, Maloney at 15 percent, Teachout close behind with 12 percent, and Eve in the low single digits.

The candidates will now have a chance to shake things up and grab voters' attention on August 28, when NY1 will host a 90-minute debate that will air live throughout the state.