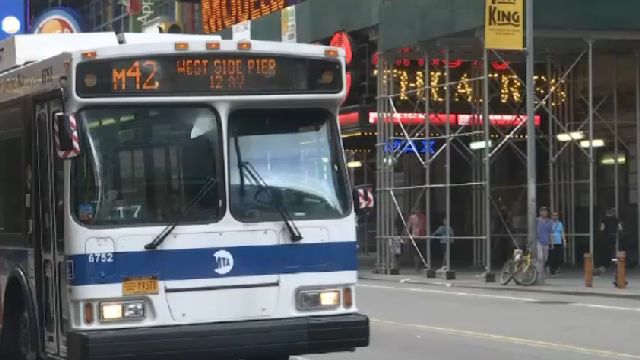 Break out the bow ties and the formal wear — it is awards season on the transit beat.

A ceremony Tuesday revealed awards that no one would want to win: the honors for the slowest and most bunched bus routes in New York City.

The "Pokey" and "Schleppie" awards, formerly an annual tradition for the Straphangers Campaign, returned after a three-year hiatus.

Anyone who has ever tried to cross 42nd St. on a bus will not be shocked to learn that the M42, running from river to river, is the "Pokiest" bus in town.

It runs a staggering 3.2 mph, enough to win for the fifth time in the 15-year history of the awards and draw an unflattering comparison.

This is unlikely to shock New Yorkers, given the congestion along much of 42nd St. But advocates say the awards are to make the point that the city transportation department and the MTA need to do more to get buses moving more rapidly. That includes more enforcement bus-only lanes and signals that give buses priority.

The ten slowest local bus routes all move at speeds of less than 5 miles per hour, with the average bus traveling 6.7 miles an hour.

The report relied on the MTA's own Bus Time data to analyze how routes operate between 10 a.m. and 4 p.m. on weekdays.

As for the "Schleppie," that went to the B12 in Brooklyn, branded the most unreliable bus in the city for having 21.4 percent of its buses running bunched, the highest in the city.

"It's that phenomenon of when you wait forever for a bus to show up and two to three show up at the same time," Cohen said.

In response, the MTA issued a statement, which reads, "Improving bus service is the focus of the first major reform plan Transit President Andy Byford announced since starting the job this year.  His comprehensive Bus Plan prioritizes completely redesigning the entire bus network in collaboration with NYCDOT and the NYPD, who are critical partners we need to unclog traffic and allow us to deliver the world-class service that New Yorkers deserve and that our fleet and personnel are capable of delivering. The Bus Plan is well under way – a completely new Staten Island Express Bus network launches on August 19, and we’ve already begun working with NYPD to improve enforcement."