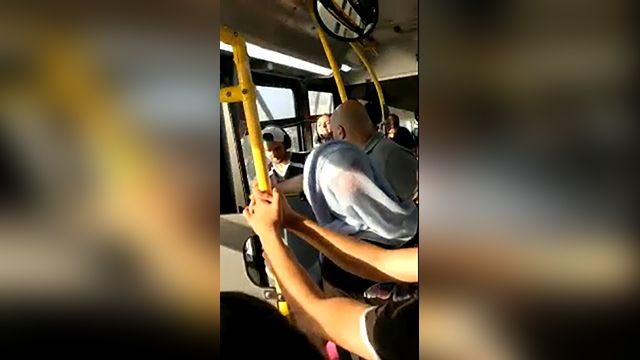 Local officials and advocacy groups are denouncing what they call another sign of increasing hostility and discrimination towards Muslims after a video posted earlier this week shows a commuter verbally harassing an apparent Muslim woman on a bus heading to Staten Island.

A passenger on an S53 bus to Staten Island posted a 30-second video of a woman spewing hateful comments on board:

The viral video shows a woman allegedly making racist comments towards another woman wearing a headscarf aboard an MTA bus from Bay Ridge to Staten Island.

"Immigration at the door! Oh wait, is that ICE [U.S. Immigration and Customs Enforcement]? Oh mama, they here for you," the woman, who identifies herself as Ashley in the video, said to the Muslim woman.

The bystander who shot the video said the incident started after the apparent Muslim woman blocked the bus door with a baby stroller.

The hostile woman named Ashley also said this, right to the camera:

"I'm getting into a fight with some Muslim chick because she has an attitude, because she thinks she has rights that she doesn't have!" Ashley yelled to the camera.

The MTA said it is investigating the incident.

The New York chapter of the Council on American-Islamic Relations, or CAIR, condemned the anti-Muslim tirade and is calling on the MTA to implement bystander education programs.

"It really symbolizes the broader uptick in hate and violence that we've seen across New York City," Albert Fox Cahn, the director of CAIR-New York, said about the video.

CAIR officials said that the advocacy group has recorded a 974 percent increase in the number of anti-Muslim acts of discrimination and violence since 2016.

"It always disturbs me to see these sorts of acts on our streets, on our trains, on our subways," Albert Fox Cahn said. "But it also is particularly egregious that here there were so many passengers sitting by doing nothing, saying nothing when their neighbor is being attacked for what she believes."

Meanwhile, Brooklyn Borough President Eric Adams released a statement, saying, "'Ashley's' behavior is heinous, and in no way represents the values of the city I love. As a former transit cop, I feel particularly sensitive to any condition that would make any rider feel unsafe or unwelcome when moving around our city. The next time I ride the S53 bus, I intend to send a clear message about the beauty of our diversity."